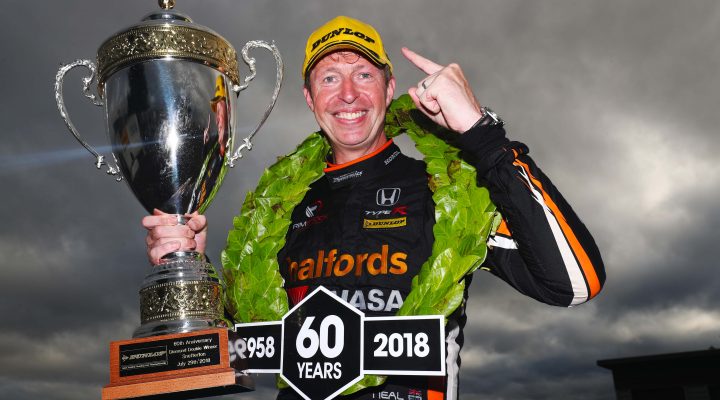 Dunlop MSA British Touring Car Championship legend Matt Neal – a three-time champion who has already written his name in the series’ illustrious 60-year history – has landed another landmark moment in his career with a memorable victory in today’s commemorative ‘Diamond Double’ race at Snetterton.

The ‘Diamond Double’ – a one-off 60-mile, ballast-free and double points race – was announced ahead of the 2018 season as a special celebratory contest to mark the 60-year anniversary of the BTCC.

Whilst the 30-race season and ultimately the overall championship remains the main priority of drivers and teams, this particular race was the one that everyone wanted.

WIX Racing with Eurotech driver Jack Goff made a steady getaway from pole position and kept Neal at arms length during the early running, before a brief rain flurry brought the Halfords Yuasa Racing man onto the rear of the leading car.

The moment of truth came on lap nine as Neal scythed his way past Goff’s Honda Civic Type R, whilst Tom Ingram looked on behind in his Speedworks Motorsport Toyota Avensis.

The trio remained inseparable for the remainder of the race but Honda’s Neal held on to take a memorable 63rd win of his illustrious career.

The opening race of the day was another classic as Goff and reigning champion Ash Sutton crossed the finish line together.

A cat-and-mouse duel took place throughout the contest after Sutton had sensationally blasted his Subaru Levorg from seventh to second on the opening lap. Goff opened up a gap of more than three seconds in the early running but Sutton was soon reeling him.

A series of fastest laps midway through the race eventually left Sutton’s Subaru on Goff’s tail with less than two tours of the Norfolk track to go. Slight contact through Brundle’s was followed by a pulsating scrap over the last four or five miles of action.

Goff got a little out of shape at the Bomb Hole on the last lap which allowed Sutton to make a move around the outside, with both cars exiting the final corner almost side-by-side. Goff fought back on the blast to the line and hauled his Honda alongside, and ultimately just ahead, of Sutton’s Subaru as the chequered flag fell – clinching an extraordinary photo finish by just 0.152s.

Adrian Flux Subaru Racing star Sutton hit back in race two as he took his third win of the season, narrowly fending off the Power Maxed TAG Racing Vauxhall of Josh Cook.

Ingram produced one of the drives of the season to surge from 27th on the grid to claim the unlikeliest of podiums, with his Speedworks Motorsport Toyota Avensis completely hooked up in the drying conditions.

Ingram made amazing pass-after-pass with his final two moves bringing his team to their feet in a tense finale. He sliced inside Chris Smiley’s BTC Norlin car with just over a lap remaining and then manoeuvred his car alongside Cammish’s Honda on the run to the line. When the chequered flag fell it was Ingram celebrating – taking the rostrum by just 0.042s.

When the dust settled on an historic day of BTCC racing it is Ingram now leading the Drivers’ standings by five points from Team BMW’s Colin Turkington.

BMW still lead the Manufacturers’ honours but Halfords Yuasa Racing have moved to the summit of the Teams’ table.

Ingram and his Speedworks Motorsport squad hold the advantage in both Independents’ orders, whilst Cammish heads the Jack Sears Trophy.

Jack Goff said: “I wish it’d been the last lap three laps before! We knew we had to get a gap at the start with us being front-wheel drive. We did that. The WIX Racing with Eurotech Honda Civic Type R was on rails at the start. About four or five laps from the end, Ash had eight tenths of-a-lap on us. We had strengths through sector one and he had us in sector three. He didn’t hold back at the end of last season so he was never going to hold back here! We were both on the absolute limit and what a great way to end the race that was. I knew Ash was much quicker in the last sector but he dropped a wheel on the kerb on the outside of the last turn, it was neck-and-neck and it was a combination of grip and speed over the line. I knew we’d have our hands full when I saw Ash was the highest-placed rear-wheel drive car!”

Ash Sutton said: “When I saw Jason in an incident I thought ‘please don’t bring out a safety car’. It made my life ten times harder and brought Josh (Cook) right back into it. Our performance in the dry isn’t the strongest. Josh’s outright pace was a little better than mine but the team have done a great job. I originally thought we’d struggle to hold it so I’m really pleased with that win. It’s very much like last year. The competition has upped its game this year but we’re not at the peak of our performance yet.”

Matt Neal said: “I can’t believe it. I don’t know where to put this huge trophy, I’ll put it in the workshop with the boys because they earned it as much as me. It is magic. A lot is about qualifying and we were fortunate it ran well for us. It is nice to win on a race where it is even-stevens on the weight. It was our day today. It’s good for the championship too, but that was really special. I thought, ‘let’s give it a go’ after the first two races we had, ‘let’s give it a shot. The car was just awesome and I’ve got to thank Jack (Goff) and Eurotech for playing fair. He struggled leading into the greasier conditions but then he seemed to get a second wind. He had Tom (Ingram) in his mirrors later on. I had a sense of relief only when I saw the chequered flag! It was so marginal in the braking areas in those conditions. I was the gauge. I couldn’t be careful, though, for one or two corners otherwise the pair of them would have been right back at me again. Jack’s a good lad. I knew he would race fairly. He could have won all three today. I’ve managed to nick that one off him, just.”

Tom Ingram said: “That was a really good result for me. I was just trying to bag the points with the double score. I saw Ash (Sutton) had a drive through, so it was in the back of my mind to score. We were all quicker in different areas and we were all glued to each others’ bumpers. It was back and forth all the way through the race. I nearly said to Christian (Dick, Team Principal) to head over to Team Dynamics and say ‘let’s try to catch Jack (Goff). I’m well pleased with that for the championship.”

Micky Butler, Manager, UK and One Brand Motorsport Events, said: “Where do you start? Full wet, full soft, full prime. Everything performed over and above, especially the soft tyre in really tricky conditions. Even after the safety car the tyre came back to life. Then we have the 60-mile race; everything was pushed to the limit, every condition was chucked at it and we came through. Over the moon, simply over the moon!”

Captions: Above: Matt Neal won the ‘Diamond Double’ Below top: The BTCC’s most experienced driver notched his 63rd victory – one to remember Below top left: Champagne shower! Below top right: The plaque will head straight to Team Dynamics’ HQ Below middle large: Jack Goff pinched a storming first encounter from Ash Sutton on the line Below second left: Standings leader Tom Ingram produced an incredible comeback in race two Below second right: Ash Sutton kept his title defence alive with victory in race two Below third left: Fiercely competitive Below third right: Synchronised sliding Below second middle large: 31 of the best Touring Car stars fought as hard as ever for honours this weekend at Snetterton Below fourth left: Tom Chilton’s eventful weekend yielded a fistful of points Below fourth right: Kicking up spray Below fifth left: Too close for comfort Below fifth right: Goff celebrates Below bottom: The BTCC grid celebrates the ‘Diamond Double’ post-qualifying Saturday 28 July, 2018