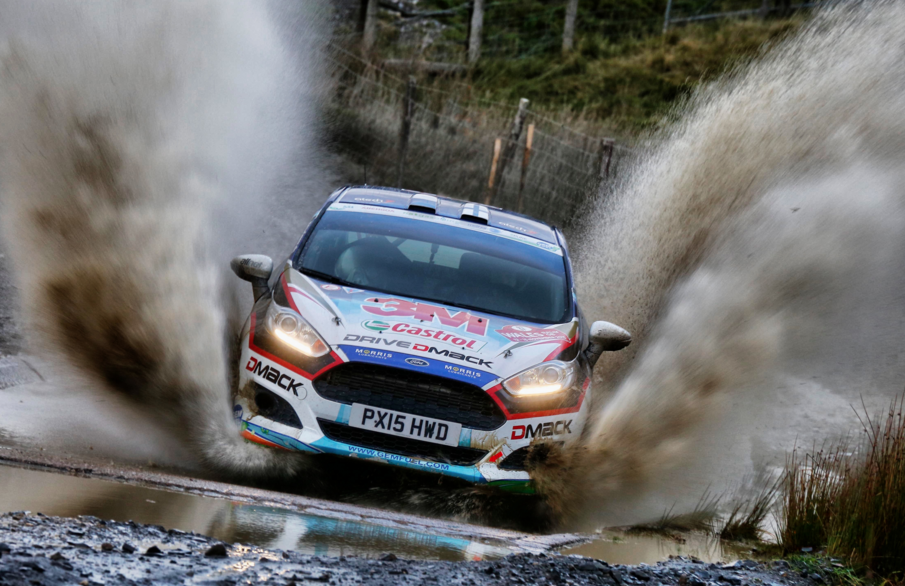 The MSA British Rally Championship (BRC) is delighted to announce that the 2016 Junior BRC Champion will win a subsidised drive in the 2017 Drive DMACK Fiesta Trophy worth £60,000. Thanks to the support of Carlisle-based tyre manufacturer, DMACK, the winner will begin their international rallying career on five FIA World Rally Championship (WRC) events in 2017.

Open to any driver under the age of 26, the DMACK Junior BRC will be a competitive proving ground for crews as they have the chance to tackle some of the best forest stages and Tarmac tests in the British Isles in FIA-homologated R2 cars. DMACK will supply control tyres for the DMACK Junior BRC series, and the number of tyres used per round will be restricted to keep costs to a minimum and to create a level playing field for all competitors in the class.

The series will take in all seven BRC events, however, drivers will only carry their best six scores towards the championship. Every crew will have to play a Joker to play on one of the rounds for which they will score double the points and the final round on the Isle of Man will also count for double points.

DMACK is renowned for encouraging young driver development and today’s announcement confirms a further commitment to the sport. By supporting the Junior BRC category, DMACK is completing a unique pathway for aspiring young drivers that can take them all the way from the domestic series right up to the top of the WRC.

The 2016 DMACK Junior BRC Champion will take a huge step onto the world stage with a subsidised drive in the 2017 Drive DMACK Fiesta Trophy on five WRC rounds, with the winner benefiting from testing before every round as part of the package. The winner of the 2017 Drive DMACK Fiesta Trophy will themselves receive a funded drive in an R5 car on selected events during the 2018 WRC season.

The company has already made big commitments to the 2016 BRC, having announced that it will run promising young talent Max Vatanen, son of 1980 BRC Champion and 1981 World Champion Ari Vatanen in a Ford Fiesta R5 adorned in the DMACK colours.

Dick Cormack, DMACK managing director, said: “In addition to supplying performance tyre products, the DMACK ethos is built around helping career-focussed drivers through the ranks of the sport. The Drive DMACK Fiesta Trophy has been hugely competitive and successful – proving the performance of our products on two-wheel-drive cars on the world’s toughest stages – and we are delighted to be able to link into that from our home rally championship. It’s a huge prize and one which we are sure will create some excellent competition.”

“We set out to create a junior championship that would help the best young drivers progress their careers and we are absolutely thrilled that DMACK’s superb prize confirms that the Junior BRC is the best place for young drivers in this country and abroad to compete next year.

“DMACK were one of the first to signal their intentions by announcing that they would run Max [Vatanen] next year in the BRC1 category and from there we have seen many drivers commit themselves to what is going to be a fantastic series.

“Now to have DMACK’s support for the Junior BRC is fantastic, not only for the championship but more importantly for the young drivers who will hope to use it as a launch pad for their careers. The winner will earn themselves an amazing opportunity to progress onto the International stage, while all the drivers and co-drivers in the Junior BRC will be supported in their development by the coaches and tutors of the MSA Academy.”

Recognising the variety of options open to young drivers, BRC organisers have confirmed that the winner of the DMACK Junior BRC is not obliged to take the Drive DMACK prize for 2017. Should they wish to progress their career elsewhere, perhaps alongside a manufacturer, then the winner can opt to take an alternative cash prize of £20,000 towards a programme of their choice the following season.

The 2016 BRC season will be open to rally cars conforming to FIA-homologated classes. The top category will see the exciting R5 cars do battle with S2000 and RRC machinery at the front of the field, while support classes including the Junior BRC for R2 specification cars will showcase the very latest rallying models on the special stages. There is also a National Rally Cup for non-homologated cars that have an MSA log book, which will compete over the same events with the same challenges.

The revamped series will take in seven events across the British Isles as it tours England, Northern Ireland, Wales and Scotland before culminating on the iconic lanes of the Isle of Man. Asphalt special stages and gravel tests will see the country’s best drivers in the best cars fight for overall supremacy on the best events.