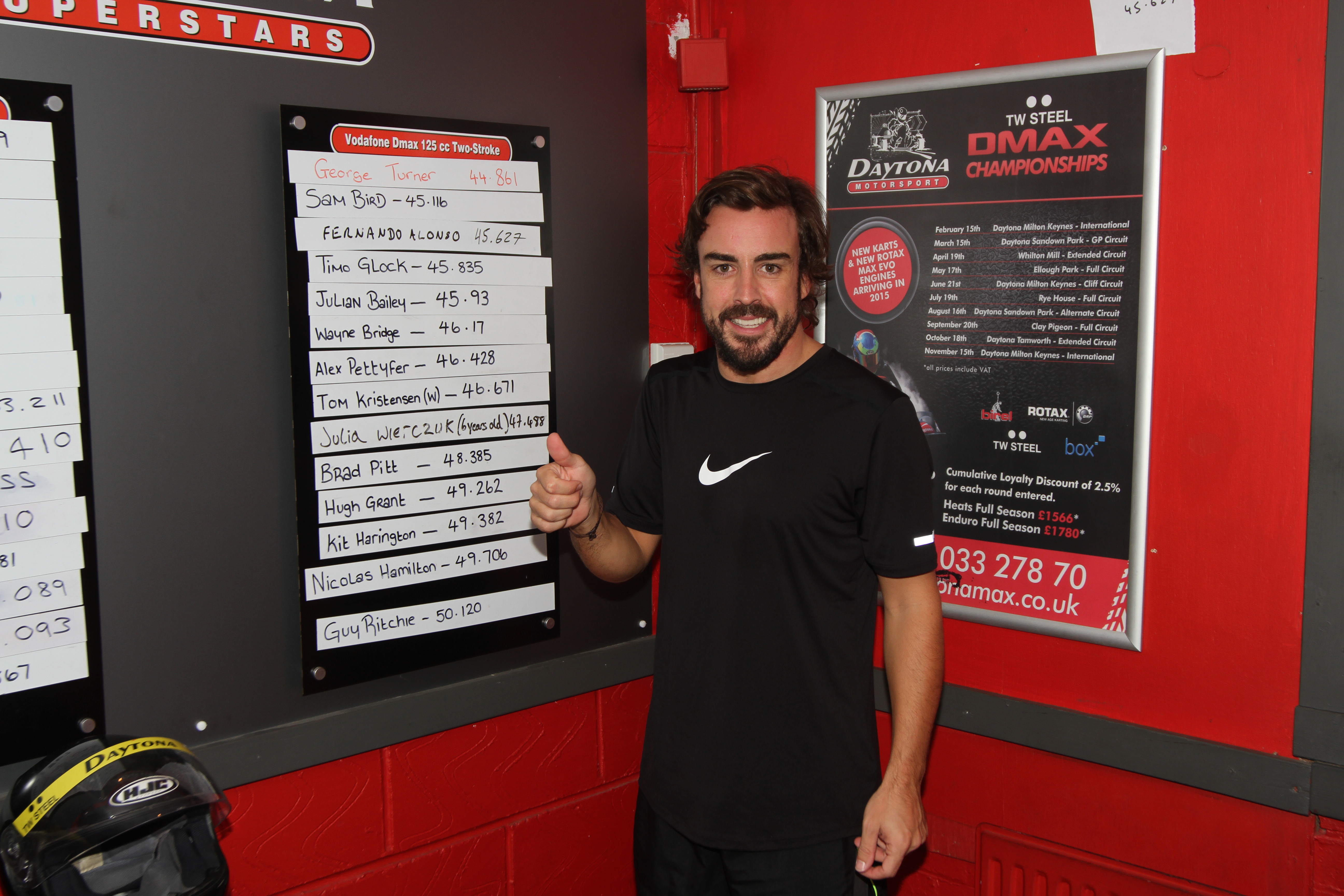 Fernando Alonso dropped into Daytona Sandown Park earlier this week and demonstrated all the skill that has made him a two-time Formula One World Champion by storming to the third-fastest time on the track’s Superstars board.

After coming along for an ‘Arrive-and-Drive’ session on Monday evening in one of Daytona’s high-performance Dmax karts, Alonso returned two days later with a dozen colleagues and friends for a couple of exclusive races around the GP Circuit.

Despite being purely for fun, the Spaniard’s competitive spirit – which has seen him rack up no fewer than 32 grand prix victories over the course of a glittering F1 career – was clear to see, as he set his sights firmly on adding his name to Daytona Sandown’s Top Gear-style Superstars board.

Following a ten-minute practice session to master the challenging layout, McLaren-Honda driver Alonso triumphed in the qualifying race before taking the chequered flag second in the final, posting his fastest lap on the very last tour and subsequently leaping up onto the podium. At one stage, he scythed his way through from the back to the front of the field in barely two laps.

The 33-year-old’s 45.627s effort placed him third on the prestigious Superstars leaderboard – ahead of motor sport luminaries of the ilk of Timo Glock, Julian Bailey and Tom Kristensen and global megastars Brad Pitt, Hugh Grant and Guy Ritchie. He was only marginally adrift of FIA Formula E Championship ace Sam Bird, who began his racing career at Daytona Sandown Park.

“Fernando popped in on Monday evening for an informal ‘Arrive-and-Drive’ session in our Dmax karts, and he must have enjoyed himself because he returned for a couple of hours on Wednesday with a bunch of friends and colleagues for a private little race event,” revealed Daytona Motorsport Director Jim Graham.

“He told us he wanted to get himself onto our Superstars board after seeing it on Monday, and his best lap was a highly respectable effort, especially bearing in mind that the track was not at its grippiest at the time.

“To be pretty much immediately within half-a-second of local expert Sam Bird – who grew up driving go-karts around Sandown – was impressive stuff, and he was chuffed to bits to finish on the podium. He was really relaxed throughout, just hanging out with the staff and having his photo taken. I think he had a great time.”

For further information about Daytona Motorsport, call 033 033 27870 or visit the website www.daytona.co.uk