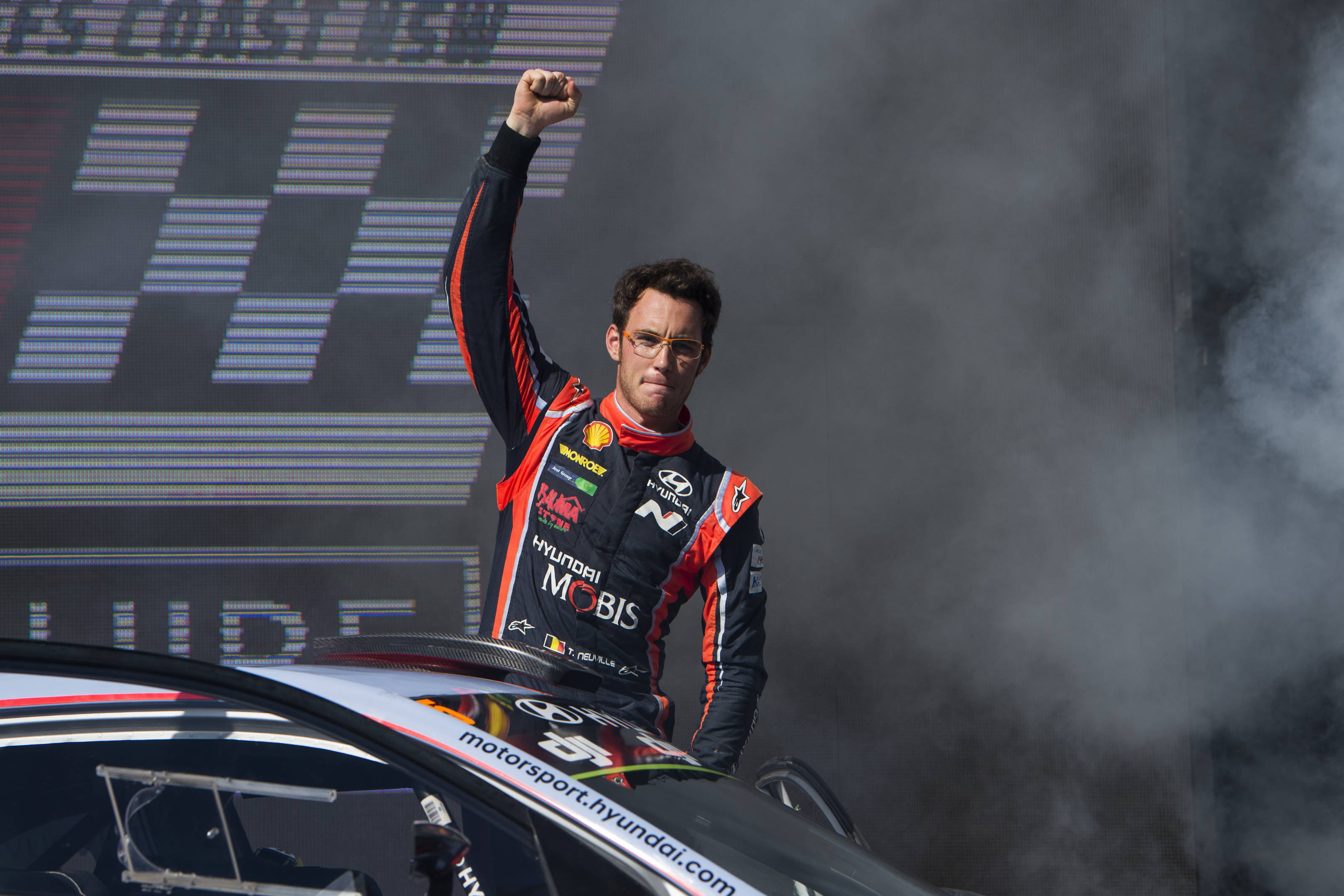 Thierry Neuville clinched his fourth victory of the campaign at Kennards Hire Rally Australia to secure the runners-up position in the FIA World Rally Championship and bring the curtain down on a sensational season.

Torrential rain on the final day threatened to undo all the Belgian’s good work as the New South Wales forest roads became a muddy mess. But he held off determined challenges from Finland’s Jari-Matti Latvala and Estonia’s Ott Tänak to win the 2017 finale by 22.5sec.

It added to previous successes in France, Argentina and Poland and made him the most successful driver of the season in terms of wins. But he had to settle for second in the points for the third time in five years.

Neuville took the lead when his Hyundai i20 team-mate, Andreas Mikkelsen, retired after hitting a bank and suffering a double puncture on Saturday morning. With only one spare tyre on board the Norwegian was forced out having won five of the opening six stages on what was just his third outing with Hyundai.

Rain, however, drenched the long Bucca special stage and Latvala halved the deficit to eye the opportunity of a late victory bid and another nail-biting finish.

Neuville threw caution to the wind to regain vital seconds, made all the more important when the penultimate test was cancelled due to the weather.

“That was a hell of a ride! I kept the car on the road but it was close sometimes. I knew I could make a difference but I had to be clever. You lose grip, you lose control and the car doesn’t respond to your input,” said Neuville.

Latvala looked secure in second but incredibly crashed his Toyota Yaris in the final live TV Power Stage, promoting a surprised Tänak to runner-up in a Ford Fiesta.

Second for Tänak in his final event for M-Sport World Rally Team before joining Latvala at Toyota Gazoo Racing in 2018, preserved the title-winning British squad’s record of a podium on all 13 rounds.

Behind the top three Kiwi ace Hayden Paddon ended a miserable campaign with third in another i20. He capitalised on an error by Craig Breen, who rolled his Citroën C3 into retirement when on course for his best result of the season.

Sébastien Ogier, who clinched his fifth consecutive title last month in Wales, completed the season with a low-key fourth in a Ford Fiesta. Gearshift problems blighted his weekend and a timing error added to his woes today with a 60sec penalty. He did end the season on a high, however, by winning the closing Power Stage.

Elfyn Evans who had dramatically won the previous round on home soil, struggled for grip all weekend but the Welshman’s persistence was rewarded with fifth ahead of Esapekka Lappi.

Kris Meeke was among the early pacesetters before breaking his C3’s suspension. He returned to the action, though, to claim seventh.

FIA World Rally Championship (after round 13 of 13)