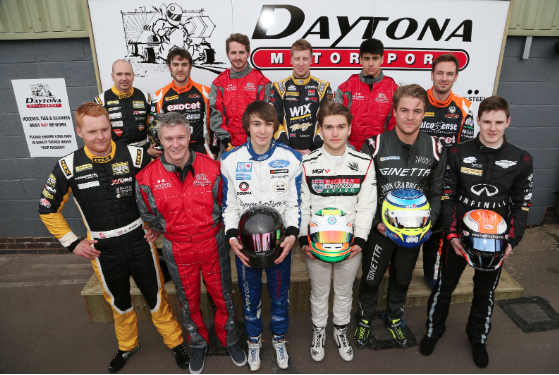 The new Daytona Tamworth kart circuit opened to popular acclaim last Friday (17 April), with professional drivers and amateurs alike waxing lyrical about the track and its facilities at a star-studded launch and team endurance race prior to its public opening the following day.

Daytona Tamworth joins existing venues in Manchester, Milton Keynes and Esher as part of the successful Daytona Motorsport stable. The UK’s leading kart venue operator already attracts in excess of 150,000 leisure and professional drivers annually, aged five and upwards, and the fourth Daytona facility is set to see that number rise yet further.

The Mayor of North Warwickshire, Cllr. Ray Sweet, was the guest of honour and cut the ribbon to officially inaugurate the superb new 1,000-metre circuit, ahead of the hour-long Daytona Tamworth Pro-Am Karting Challenge, which pitted almost 50 drivers against one another in a fleet of Sodi RT8 pro-racing karts.

The track action revved into life with practice and qualifying sessions, both of which witnessed a captivating nip-and-tuck duel between Team Fielding and Team Abbott for initial bragging rights. The former ultimately prevailed, but with barely 1.2 seconds blanketing the entire field, a tantalisingly close race was clearly in prospect.

Team Abbott sped immediately into the lead as the pole-sitting Team Fielding fell to the back of the pack – five laps down – during an incident-strewn opening stint. As the race progressed, Team Morgan upped the tempo and took the challenge to the early pace-setter, reducing the deficit to a scant four tenths-of-a-second at a quarter-distance.

As the scrap for the top spot intensified, a penalty for Team Abbott dropped the erstwhile leader down to sixth, two laps adrift, leaving Team Morgan clear at the top of the timesheets. That order was maintained through to the chequered flag, as Team Morgan triumphed ahead of Team Martins and Team Cook at the end of 58 laps of fast-and-frantic competition.

Mention should also go to the delayed Team Fielding, whose team captain – one of last year’s McLaren AUTOSPORT BRDC Award finalists – earned himself a legion of fans as he fought back brilliantly to seventh, lowering the lap record time and again. The 19-year-old demonstrated the durability of the tyres as he set a new benchmark of 59.072s close to the end, reclaiming three laps along the way to round off a thrilling official opening for Daytona Tamworth.

“We’re absolutely over-the-moon with how it went,” enthused Daytona Motorsport Director Jim Graham. “It’s taken a year’s hard graft to get to this point, and I need to say a massive ‘thank you’ to everybody behind-the-scenes here at Daytona Tamworth; they’ve all done a superb job to get this place ready. The team is entirely new and all local people, and they’ve settled in seamlessly.

“There have been some incredibly long hours put in by all involved and some tremendously conscientious contractors – but it’s all been worth it to see the huge smiles on people’s faces when they climb out of the karts, and the feedback on both the circuit and facilities has been phenomenal. It’s been a brilliant event.”

Rob Austin
“I’ve done a lot of stuff at Daytona circuits, and they’re a great bunch of guys. As ever, they put on a superb afternoon’s entertainment. The new circuit at Tamworth is really nice to drive – it made for some exciting racing and I really enjoyed it. I’m already planning on going back and getting in one of their quicker DMAX karts!”

Sennan Fielding
“I really enjoyed the whole event. The atmosphere was fantastic, and the Daytona team made us all feel really welcome. The circuit is great fun – it’s fast-and-flowing with a little bit of everything, which makes it the ideal challenge. The karts are very evenly-matched, which generates exciting racing and the track layout provides several good overtaking opportunities. I’ve been to quite a few corporate karting circuits with my mates, and this is without doubt the best. I’ll definitely be back, and I’m chuffed to have the new lap record – hopefully it won’t be beaten too quickly…”

Adam Morgan
“It’s a mega track. I’d describe it as a miniature Le Mans – fast, bumpy and always on the edge of your seat!”

Sam Tordoff
“Daytona Tamworth is a really enjoyable circuit to drive. The longer and more realistic you can make a corporate track the better, and this one ticks all the boxes. The redeveloped first section is very fast, which complements the tighter end to the lap. The karts are brand new and very impressive to drive.”

Josh Cook
“It’s wicked! It’s a very fast-and-flowing circuit, with a great mix of corners. That makes it hard work, but at the same time a lot of fun to drive!”

Derek Palmer Jr
“The circuit is great. The first part is very quick and flowing, and that leads into more technical corners that really tighten up on the exit. It’s got a great mix, which makes it great for racing and there are plenty of opportunities to pass – it’s a lot of fun. Karting is the root of motorsport, and Daytona’s arrive-and-drive formula allows people to get a taste for that – I think it’s fantastic.”

Ian Gallagher (Guest)
“The corners are really challenging and the karts are so much fun – they just keep on giving; every time you think you’re going to run out of grip, you put your foot down and it grips even more.”

More great coverage for Air Race E in The Sunday Times Driving! 🙌🙌 Check it out at 👉 driving.co.uk/news/interview… #AirRaceE #MPACreative pic.twitter.com/R2kXIN63JY