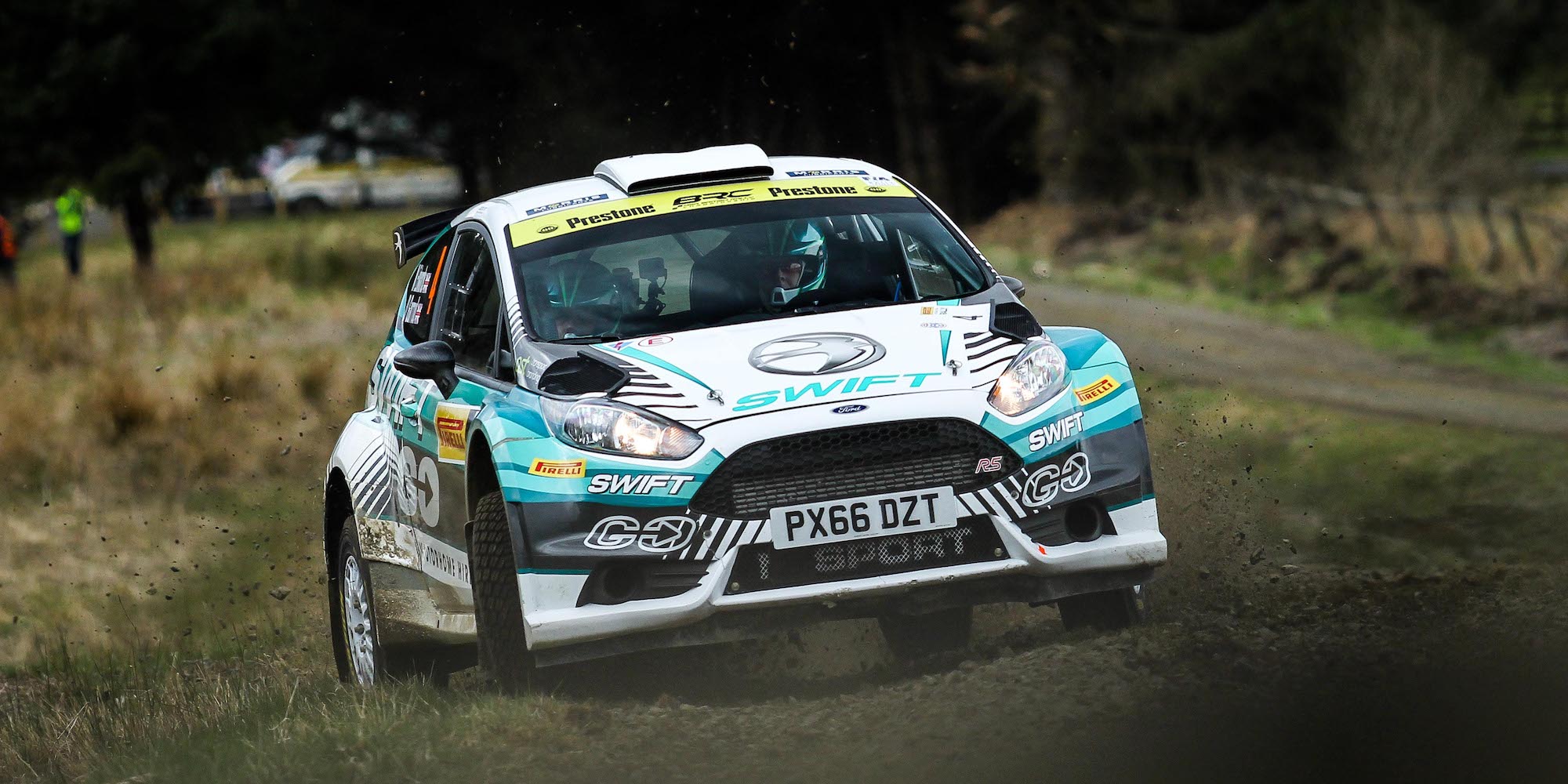 The Welsh duo didn’t have it all their own way as young gun Rhys Yates and navigator Elliott Edmondson in a Skoda Fabia R5 stormed to their best BRC result with second. Reigning champions Keith Cronin and Mikie Galvin made it a three-way fight for victory in a new Hyundai i20 R5 with the Irish crew eventually finishing third – making it three different marques of cars on the first podium of the year.

The opening round of the eagerly anticipated 60th anniversary year got underway with 80 fast and furious gravel miles through the legendary Kielder Forest. Starting from the Pirelli factory in Carlisle, the BRC crews were cheered into the eight-stage event by the Mayor of Carlisle, Trish Vasey, local MP John Stevenson and thousands of spectators.

The English round of the series always provides drama aplenty and this instalment was no different as the first stage claimed its first victims – David Bogie and John Rowan. Driving for Carlisle-based firm CA1 Sport, Bogie rolled his DMACK-supported Skoda Fabia R5 out of contention. Thankfully both crew members were left unscathed but this paved a way for their rallying rivals.

Reigning champions Keith Cronin and Mikie Galvin put their new Hyundai i20 R5 through its paces on the Cumbrian gravel. Cronin began his quest for a fifth title – to match series history maker Jimmy McRae – in fine fashion. The Michelin-supported star initially held the lead before an on-form Edwards mounted his charge.  Suffering with a lack of competitive miles in the new car, Cronin struggled with pace in the afternoon loop and went too tight to a chicane bale and had to reverse to get going again – haemorrhaging time to the top two.

Matt Edwards and Darren Garrod lost out on their first BRC win by one tenth of a second last season, and the Welsh pair were out to set the record straight in 2018. Reeling in Cronin throughout the morning, Edwards fired into the lead and never looked back, punching in five out of eight fastest times in the Swift Group Fiesta to clinch an emotional first win in Britain’s premier rallying series. Edwards’ win also provided Pirelli a much coveted home win in the process

After a strong run on the European championship round in the Azores, Rhys Yates continued his excellent form in his brand new Skoda Fabia R5. Showing speed and consistency throughout the day, the Derbyshire-based driver hunted down Cronin in the closing stages, overhauling the Irishman with a fastest time on stage eight to clinch second by just 1.3 seconds – and in the process his BRC result to date.

Fellow Skoda Fabia R5 driver Marty McCormack and co-driver David Moynihan came out of the blocks on the opening stage to sit second but soon after discovered gearbox gremlins. With no spare, and limited time to rectify any problems the Irishman adopted a mechanically sympathetic approach to bring his Kumho-shod Skoda Fabia R5 into a well earned fourth.

Rounding out the top five was Jonny Greer, contesting his tenth Pirelli Rally – this time in his recently-acquired Ford Fiesta R5. The Pirelli-supported driver with Kirsty Riddick calling the notes gathered momentum with every stage mile to secure fifth at the end of their first loose surface event in the car – a solid start to their championship campaign.

Norwegian Steve Røkland and British co-driver Tom Woodburn performed a front-wheel drive masterclass in the Prestone Motorsport News MSA Junior BRC to take their first win in the series by a comfortable 1 minute 13.3 second victory in a Peugeot 208 R2. Chalking up all but one fastest stage time on the fast and flowing gravel, the pairing didn’t put a foot wrong as they lead the championship after the first round.Welshman James Williams and co-driver Ross Whittock were a new partnership in a Vauxhall ADAM R2. The Network Q team started off slowly in fifth but played a patient day-long game as they chipped their way up the field through blistering pace and took advantage of faulting rivals to seal their best BRC finish yet. William Creighton and Liam Regan won the Pirelli Rally in 2017 and after a slow start on the rally the Irish duo clawed their way onto the podium to put their Peugeot 208 R2 into the final rostrum position.

In the Cadet Cup for drivers aged 25 and under – a new class for 2018 – were to tackle the infamous Kielder forest. It was Englishman Jordan Reynolds and Welsh co-driver Peredur Wyn Davies who made it first past the post in their Ford Fiesta R2.

Scottish driver Finlay Retson held the advantage early on before the gearbox on his Ford Fiesta cried enough. Swooping onto the first podium of the year was Gunnar Karl Jóhannesson from Iceland (Ford Fiesta R2) and Bart Lang and the Myerscough University team who brought its Ford Fiesta R2 into third place.

Quotes from round one – Pirelli International Rally

“It’s been a long time coming and I cannot thank everyone at Swift and M-Sport who helped get us to this position. The Manx last year was an initial disappointment but it has given us the confidence to fight at the very front. I knew we wouldn’t be far away this weekend and car felt good, I was relaxed and it did everything I needed it to do. This sets us up nicely for the rest of the year but we aren’t going to get too carried way as it is early days in the championship but I am quite happy to go away with my first international win –it’s a feeling nobody can take away from me.”

“Second is mega and we are really pleased to have taken a fastest stage time as well. It was our first BRC stage win, so I am chuffed with how the whole weekend went. I saw the time coming down to Keith and I thought we could have a real push as second was for the taking. Second feels like a win as I would have taken third at the start of the event! We look forward to the Tarmac now. The car is great on it and I think I go better on it so hopefully we can keep building to greater things.”

“It was a really late deal to get us here and we didn’t have much time to test the car before coming here which left us on the back foot slightly. Naturally, I was a bit disappointed to lose out on the last stage but everything on the car was great, maybe I was a little rusty. Compared to the first three events last year when we were in no mans land, I feel we have a better start to build on this year. Hopefully before Ypres we can fine tune things and get us ready for the Tarmac and go forward.”

(* = Joker nominations have been played. Dayinsure Wales Rally GB is a double-header with two points-scoring opportunities.)