EDWARDS DOES THE BRC DOUBLE IN BELGIUM 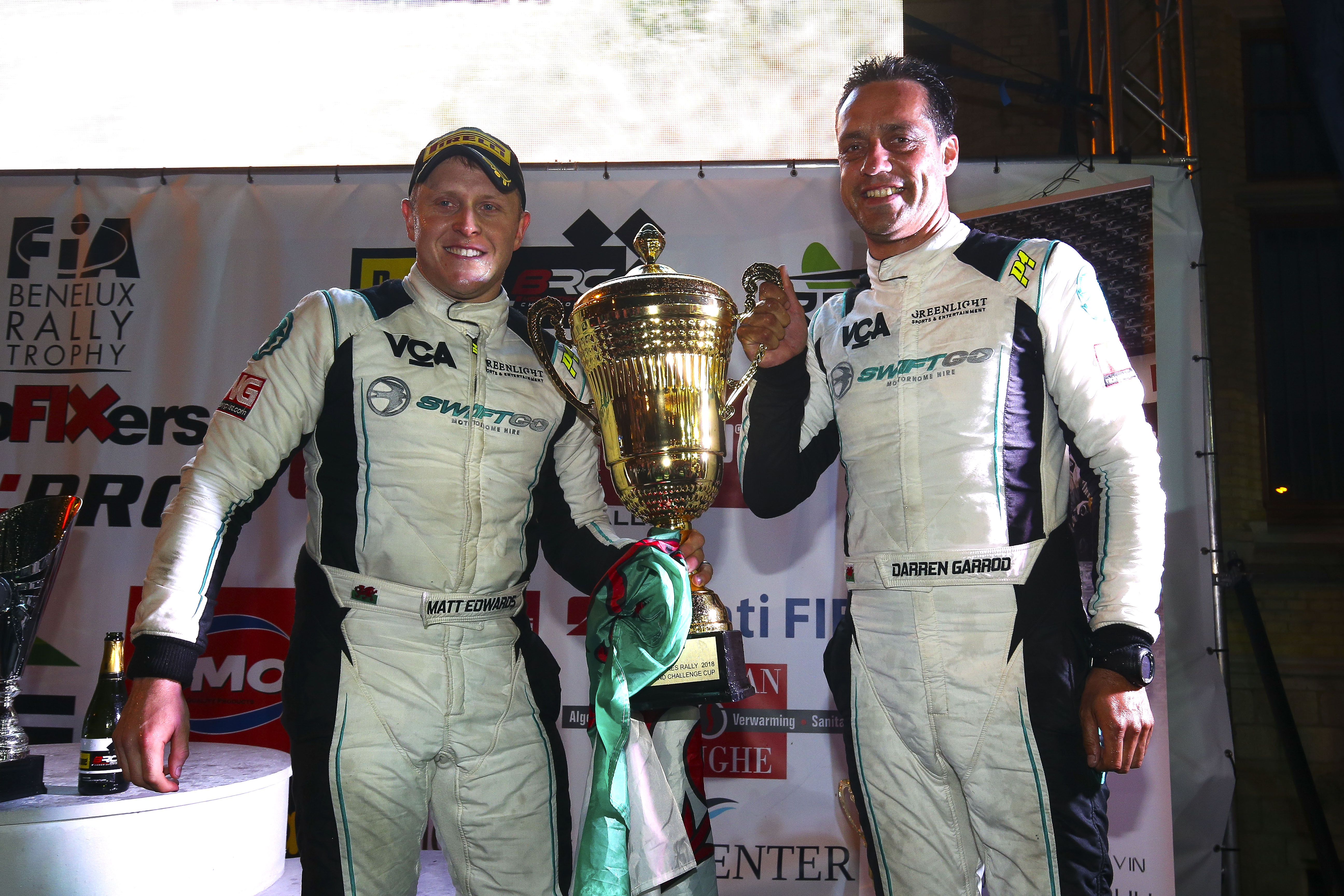 Matt Edwards and Darren Garrod stretched their championship lead after an enthralling Prestone MSA British Rally Championship contest on the Renties Ypres Rally (22-23 June). The Welsh pairing claimed a last-gasp victory to seal their first BRC win on Tarmac – backing up their victory on the opening round of the series on gravel. What’s more, the M-Sport crew lifted the Tony Pond Trophy for the first British crew across the finish line in eighth in their Ford Fiesta R5.

The action-packed Prestone MSA British Rally Championship travelled to Belgium for the exciting Renties Ypres Rally. Playing host to the second event of the 2018 season and the series’ overseas round, the legendary Belgian lanes would provide the setting for 23 Tarmac stages and 175 miles of competitive action.

With one crew many fans tipped for Ypres greatness out of the event, the mantle fell to Keith Cronin and Mikie Galvin in their Michelin-shod Hyundai i20 R5 to lead the BRC charge. The Irish crew picked up from where they had left off last year, with the 2017 winner commanding the event – leading the British section into the final stage. Cronin didn’t have the rub of the green on the last test of the weekend, however, as the Hyundai i20 R5 driver suffered a puncture, dropping him to third at the Ceremonial Finish.

Matt Edwards similarly had his fair share of problems throughout the weekend. On the opening day, ECU woes and a complete wiring loom change at the final service put the team on the back foot. The M-Sport mechanics went over the allotted 45-minute service time and the Welsh crew were given a 1m 10s time penalty going into the last day. Ever the optimist, Edwards punched in several impressive stage times to haul himself from fourth into victory contention. Even a lack of power steering for two stages was not going to stop the Swift Rally Team driver. Edwards was almost settling for second, but one last push and the misfortune for Cronin allowed Matt to clinch back-to-back victories in Britain’s premier rallying series in the Pirelli-backed Ford Fiesta R5.

David Bogie and John Rowan both put their 2017 early exits behind them to open their BRC podium account for the year with a fine second place. The DMACK Skoda Fabia R5 ace got off to a cautious start, but building in confidence with every stage, the Flying Scotsman entertained the locals with his committed driving style. Marty McCormack looked set to stand on the podium with Bogie in his Kumho- supported Skoda, but steering failure on the final loop left him stranded on the roadside and spelled a cruel retirement.

Rhys Yates and Elliott Edmondson had become the first British pairing to win Rally van Wervick a fortnight earlier and arrived in Ypres full of optimism. However Yates’ weekend was one to forget. Several overshoots into fields cost the English star too much time to challenge for honours on the opening day and with Edmondson suffering from illness on the final day, the pair had to withdraw from the event.

In the Prestone MSA Motorsport News Junior British Rally Championship, Welshman James Williams and English co-driver Ross Whittock lit up the stages in their Vauxhall ADAM R2. Williams broke his BRC podium duck in Ypres 12 months ago and a year on went two better to clinch his first Junior BRC victory. Despite a spin on stage 11, thus losing his grip on the top of the timesheets,  a spirited fight-back allowed Williams to spray the champagne and claim the honour for the fastest R2 front-wheel-drive car on the event and the Junior Tony Pond Award. Williams played his Joker Card in Belgium, giving him a further five points to catapult him to the top of the championship standings.

William Creighton and Liam Regan pushed the Vauxhall duo hard in their Peugeot 208 R2 and inherited the lead when Williams faulted. Unfortunately, the thousands of fans stage-side were denied a battle royale as on stage 15 the crew from Northern Ireland slid into an infamous Belgian ditch and retired on the spot. Second went to BRC debutants Josh McErlean and Aaron Johnston (Ford Fiesta R2T) while another crew new to the podium, James Wilson and Gavin Doherty (Peugeot 208 R2) made it three different marques inside the top three.

“It’s just not going to sink in at all. Maybe it will in a few days. Just an unreal rollercoaster of an event. Thank you to everybody in the team for keeping us going, holding their heads high and believing we could get a strong result. I thought it was all over when we lost the steering. This has been a very different win for us as from stage one it’s not gone right but I never doubted myself, the team or the car. You just have to keep going and take any glimmer of hope you can as when the car was on song, the event was unbelievable.

“This has really helped my championship ambitions. I really want to win the BRC this year and will not hide away from that fact. I want to complete that box set of DVDs with my car on the 2018 front cover and we will keep chipping away to get there.”

The series returns later in the summer as the Prestone MSA British Rally Championship crosses the Irish Sea for the John Mulholland Motors Ulster Rally on 17/18 August.

(* = Joker nominations have been played. Dayinsure Wales Rally GB is a double-header with two points-scoring opportunities.)

For further information head to msabrc.com and to view the full range of BRC merchandise for the new year, visit www.prestonebrcshop.co.uk.