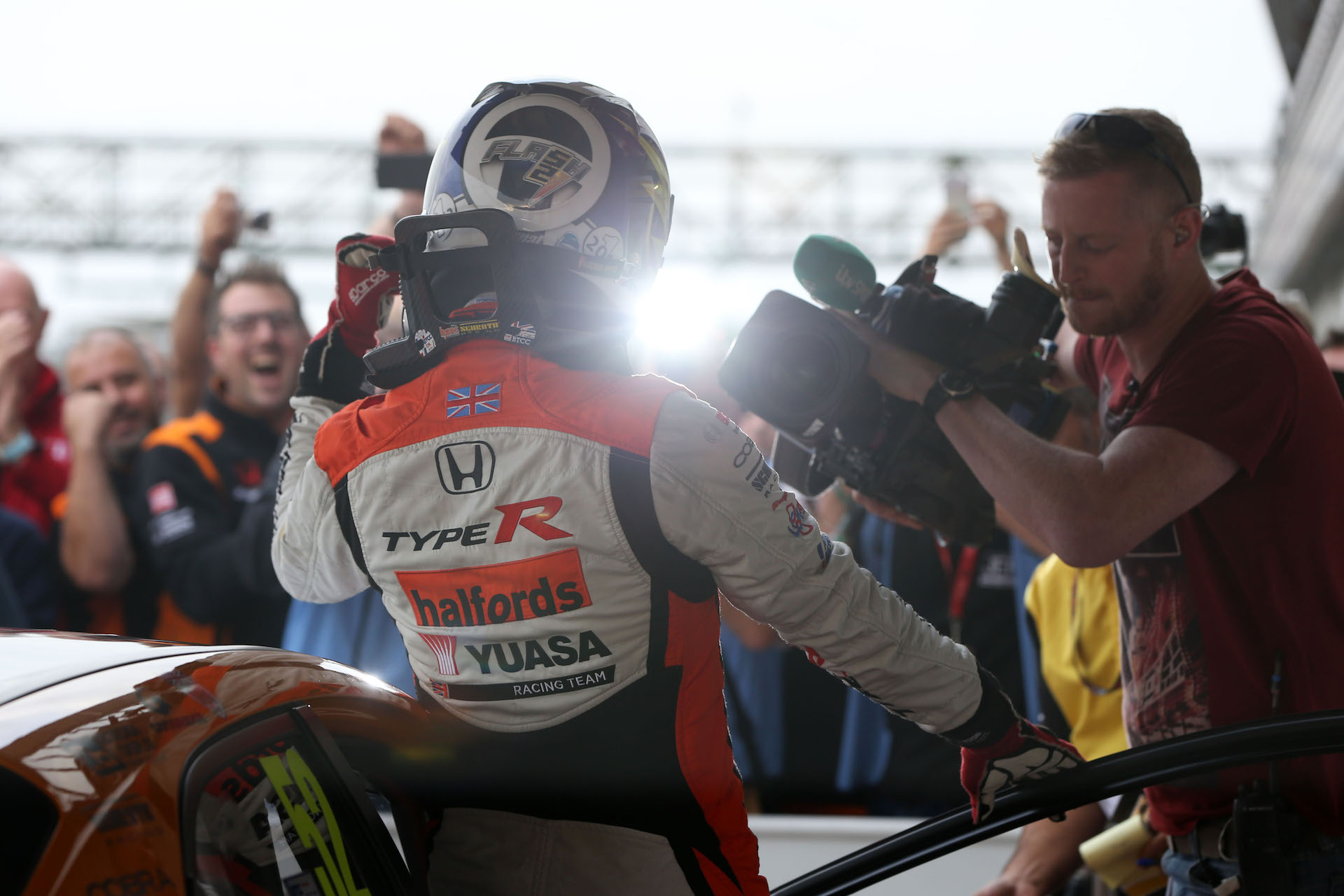 A thrilling win for reigning champion Gordon Shedden rounded out the action at Silverstone on Sunday (18 September), setting up an incredible eight-driver showdown for the 2016 Dunlop MSA British Touring Car Championship.

An unprecedented number of drivers will challenge for the title on finals day at Brands Hatch in two weeks’ time, with Team JCT600 with GardX’s Sam Tordoff currently holding the advantage by 11 points.

The drama at Silverstone commenced in typically frenetic fashion with Tom Ingram claiming the opener, following a post-race exclusion for Ash Sutton and Josh Cook due to a technical infringement.

Both MG Racing RCIB Insurance drivers had to fight back from minor setbacks off the line, with Sutton losing P1 to Ingram and Cook being demoted down to fourth by Andrew Jordan’s Pirtek Racing Ford Focus.

Slight contact between Cook and Jordan followed on lap four and the MG6 was back through into third.

Sutton was by Ingram for the lead at the start of lap eight and Cook was soon joining them in the scrap. Cook got into Ingram’s Toyota at Maggotts four tours later and despite a valiant effort from the Speedworks man, it was the MG pairing that assumed control for the remainder of the race.

Post-race, however, both MGs were excluded from the result due to their rear wings being outside of the permitted tolerance. This handed victory to Ingram, although MG Racing RCIB Insurance has appealed the Cook decision, which will be heard at a later date. Subsequently, Jordan and Handy Motorsport’s Rob Austin inherited the remaining podium positions.

Motorbase Performance driver Jordan kept his championship chances alive with victory in race two, after fending off the attentions of Adam Morgan and Speedworks Motorsport’s Ingram.

The 2013 champion started on the front row and initially hounded Ingram’s Toyota Avensis, before storming down the inside going into Becketts on lap seven.

Morgan’s WIX Racing Mercedes nipped into second as Ingram’s pace faded, but he wasn’t able to trouble Jordan’s Pirtek-backed Ford for the win.

West Surrey Racing’s Rob Collard blasted his BMW 125i M Sport into the lead off the line in the final race, as his rear-wheel drive machine launched past Shedden’s Honda Civic Type R on the run down to turn one.

Shedden would not be denied, however, as the Halfords Yuasa Racing man produced a stunning move on the second lap. As Collard braked into Maggotts, Shedden stormed around the outside and back into the lead. He went on to extend his advantage and claim his fourth win of the season.

Motorbase’s Mat Jackson relegated Collard further down the order on lap three, but the latter was able to stem the flow thereafter and make the podium.

With just one event and three highly-anticipated BTCC races remaining this season, it is Tordoff leading the standings from the Honda duo of Shedden and Matt Neal. Incredibly Collard, Jackson, Jordan plus the Subarus of Colin Turkington and Jason Plato all remain in contention to claim the most coveted prize in British motor sport. Just 37 points separate the top seven with 67 still on offer at Brands Hatch.

Michael Epps was the Jack Sears Trophy winner at Silverstone, although Sutton is still in charge of the category’s proceedings.

Rounds 28, 29 and 30 of the 2016 Dunlop MSA British Touring Car Championship will take place at the legendary Brands Hatch Grand Prix circuit on 1/2 October.

Sam Tordoff said: “From the off here we’ve had problems, so to come away having extended our lead from five points to 11 is quite frankly ridiculous! For me, the pressure is off as nobody expected this at the start of the year. I’m picking points up as we go along and seeing how we go from there really. It could be difficult at Brands with the ballast – it’s undulating, so we have to be wary. There are a lot of corners and stop-starts, though, which should suit the BMW.

“There are seven or eight guys taking points off each other out there as well as off of me, so we’ll see what happens. Regarding the competition, Honda has been up there for many years as the benchmark. I think the biggest threat comes from them – they’re experienced guys who have been there and done it. My team-mate’s there in the mirrors too, and you can never discount the Fords. It’s going to be a strange two weeks. I’ll try to keep myself sharp with BMW in the meantime, and Brands Hatch GP is my favourite circuit. I’m looking forward to it. I’ll go there the same way I did this weekend. I’ll prepare, do the simulator work and walk the track three times if needs be. Hopefully we’ll qualify well, which will be really important, and we’ll go from there.”

Tom Ingram said: “Obviously it wasn’t the way we’d have liked to have won the race and it would have been nice to cross the finish line first on the road, but a win is still a win and we had the speed to run right at the front throughout. If it hadn’t been for Josh Cook’s robust move, I think we could have taken the fight back to Ash Sutton again, but we got the result in the end anyway, and it proved we are right back on the pace after recent events.”

Andrew Jordan said: “That was hard work. I think I’ve done myself a bit of an injury celebrating! We needed that. I’ve read in places that I’ve lost my mojo, well I’ll just remind them that I haven’t at all. After the safety car, I was trying to go as fast as I could to get a gap. I wasn’t worried about the tyres. I was controlling them well. I’ve perfected a technique to look after them from back in 2013. I could see Adam Morgan was using his fronts a bit harder. We’re back in the number one spot where we should be.”

Gordon Shedden said: “The rear-wheel drive cars made a good start and I had Mat Jackson on the inside as well. I thought ‘oh no’, but my car was right on it – there was an amazing amount of grip. I got my head down and made it back past Mat and then I nipped back past Rob Collard too. I could have gone another ten laps after the chequered flag, as I was absolutely loving it. We needed that so much, it was great. It’s going to be an amazing weekend next time out at Brands Hatch. Without a shadow of a doubt, I’ll be doing everything I can to retain my title. I think the last person to do it was Fabrizio Giovanardi back in ‘07/08. I’ve been on the back foot all season really and I’ve never given up. I’m delighted to go to Brands with a chance – that’s all I ask for.”