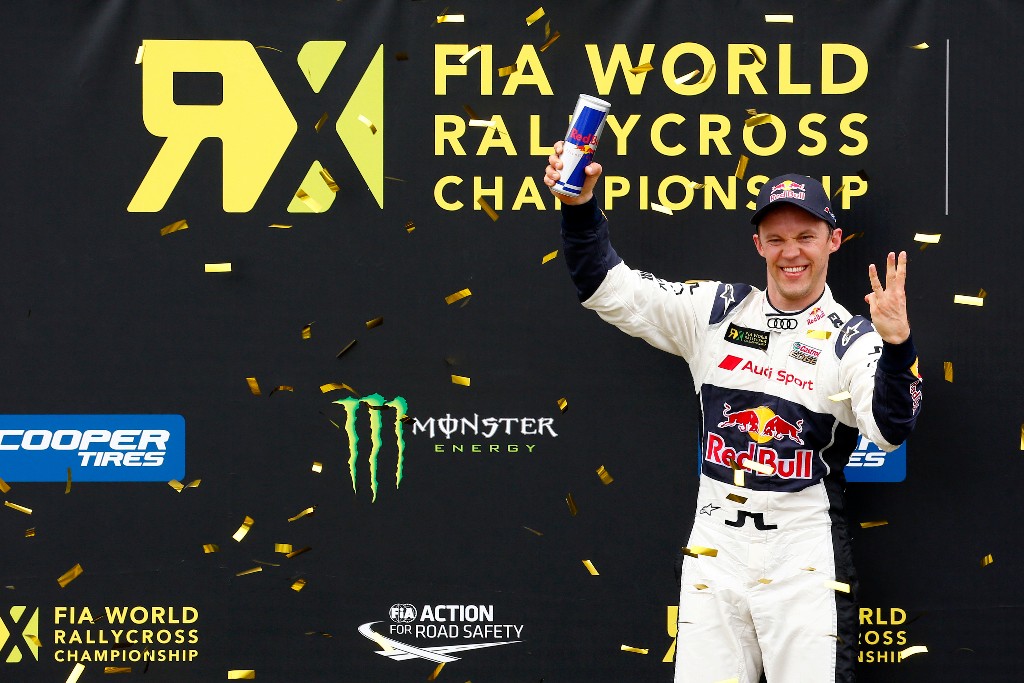 Sweden’s Mattias Ekstrom has extended his lead in the 2017 FIA World Rallycross Championship presented by Monster Energy after taking a lights-to-flag victory at this weekend’s Cooper Tires World RX of Hockenheim.  It is the EKS driver’s third win in a row – and made even more impressive as Ekstrom also raced in DTM during the same weekend.  Twenty minutes after stepping off the World RX podium, Ekstrom was back in his DTM car to take part in race two qualifying.

Hockenheim RX runner-up Johan Kristoffersson had another strong weekend after winning his semi-final which allowed the PSRX Volkswagen Sweden driver to line up alongside Ekstrom on the front row of today’s final.  Ekstrom was quickest to turn one and Kristoffersson remained second for the duration of the race. Team Peugeot-Hansen driver Timmy Hansen finished third in his Peugeot 208 WRX Supercar – two spots ahead of his team-mate Sebastien Loeb who won two qualifying races and was placed top qualifier at the end of Q4.

PSRX Volkswagen Sweden’s Petter Solberg finished fourth, slowed by a bad getaway in the final.  EKS driver Topi Heikkinen finished sixth and also won the Monster Energy Super Charge Award – a prize given to the driver who had the quickest reaction off the lights during the final. EKS has won all three Monster Energy Super Charge Awards so far this season with Ekstrom winning the first two in Barcelona and Portugal.

“I am super happy for Audi and for the whole team – thanks to the guys for the all their hard work which has really paid off,” said Hockenheim RX winner, Ekstrom before jumping into his DTM car for his next race.

Ekstrom’s team-mate Heikkinen added: “Friday was really hard for us so overnight we made some changes to the car that were hugely important.  As a team, we are working really hard and getting very little sleep over race weekends which is obviously paying off as Mattias has now won three events in a row.  He is always wanting to make changes to the car until everything is perfect.  EKS has won Belgium for the last three years in a row [Heikkinen 2014 and 2015, Ekstrom in 2016] so it is a obviously a good event for us – hopefully we can take some more silverware home for the team.”

Runner-up Kristoffersson commended Ekstrom’s efforts in today’s event. He explained: “Mattias had a very good start in the final, and I tried to follow and put the pressure on him but he did not make a single mistake for six whole laps – he was driving so well.  For that, he deserves this win and I wish him all the best in the DTM race this afternoon too.”

Reflecting on his own performance, Kristoffersson added: “Overall it was a good weekend for us – we struggled with the balance in the car during Q1 and Q2 but the launches were very good so that left me in a good position.  Everything felt better for Q3 and in Q4, it was almost perfect and I was able to push the guys out front.  I had a good battle with Sebastien [Loeb] in the semi-final and it was good to show we had really picked up the pace. Both myself and Petter have been in the final for the last three events and we continue to leads the teams’ standings which we are really happy with.”

Sweden’s Timmy Hansen was pleased to have secured his first podium of the year and complimented the performance of the car.  “The car was so good today,” explained the 24-year-old.  “Obviously I didn’t want any rain before today’s races but it was about trying to adapt to the situation as best as I could and the start line was very slippery. I was leading for most of my semi-final but I pushed a bit too hard and I went off at the Sachs Curve which was when Mattias got in front. The final was a big challenge, Mattias and Johan were tough competitors but I’m pleased to get my first top three of the year which is an important result for the team.”

Elsewhere, MJP Racing Team Austria’s Timo Scheider was seventh.  Kevin Hansen – younger brother of Timmy – was eighth, the 18-year-old having suffered a setback earlier in the day when he damaged the rear of his car after an impact during the sighting laps.  Kevin Hansen, Kevin Eriksson and Reinis Nitiss were then caught in a collision in turn two of their semi-final. Hoonigan Racing Division’s Ken Block spun in his semi-final eventually finishing 11th.

After the first three rounds of the 2017 season, Ekstrom leads the overall standings with a total of 85 points – 16 points ahead of Kristoffersson in second.  Solberg remains third with 62 points, while Loeb has moved up to fourth with 48 points – one point ahead of his team-mate Hansen.  In the teams’ standings, PSRX Volkswagen Sweden lead the way with 131 points – 17 points ahead of EKS.

World RX Managing Director for IMG, Paul Bellamy, concluded: “We’ve had 79,500 fans attend the Hockenheim RX/DTM double header and once again the rallycross Supercars have put on a fantastic display. Congratulations to Mattias, Audi and EKS for another flawless performance this weekend.  The fact that Mattias is able to swap from a rallycross Supercar to a DTM car in a matter of minutes and deliver so well in both championships is testament to his sheer talent behind the wheel.  Well done to Johan and Timmy also – both drivers thoroughly deserve a spot on the podium.  Now the teams have very little rest as it’s straight to Mettet in Belgium for round four of the season.”

Coyote World RX of Belgium will commence next weekend (13-14 May), with free practice and Q1 for some classes taking place on Friday 12 May.