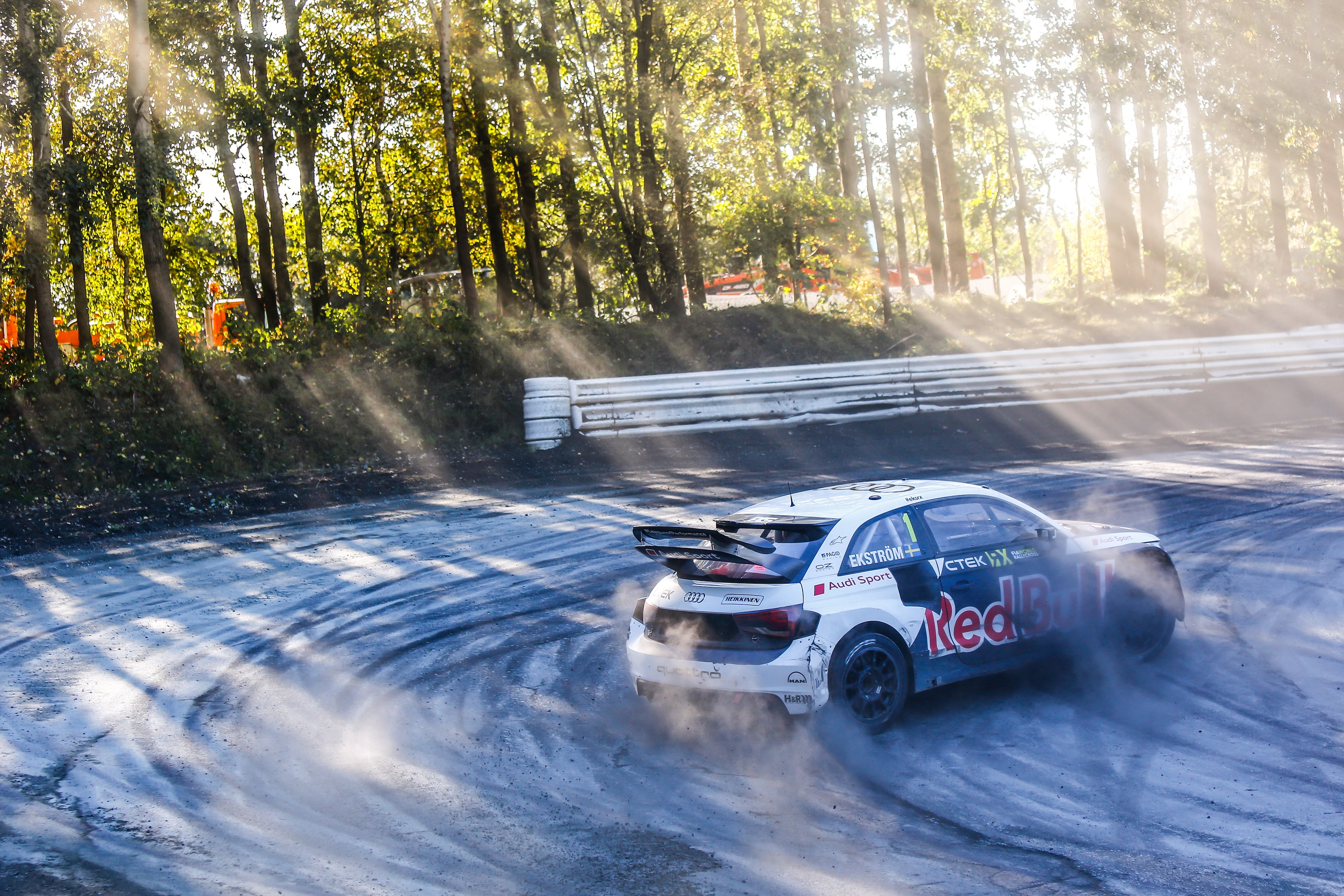 One of the most notable drives of the weekend, however, was PSRX Volkswagen Sweden’s Petter Solberg who finished fourth. The Norwegian suffered from a broken collarbone, two broken ribs and a punctured lung from the previous round in Latvia but was determined to get back in the car this weekend to fight for second in the championship.  Solberg won Q3 and Q4 to finish as top qualifier. He went on to win his semi-final but lost time in the final after going wide in turn one.

Solberg explained: “I had to make a lot of preparation for this weekend – we made some special armour to go under my overalls to keep the collarbone still – but all the time I was a little bit scared, just waiting for the big bang and somebody to hit me from behind. I had a couple of nudges, but nothing big. The final was a shame – I really wanted the win, but actually what we have achieved is like a big win for me and for my family and the team.”

Finland’s Niclas Gronholm and Sweden’s Kevin Hansen both made a World RX final for the first time in 2017.  Hansen was on course for a podium spot but dropped behind Heikkinen on the third lap when he broke the rear-left suspension of his car.  He eventually finished sixth, one spot behind Gronholm who took his best result of the year in fifth.

Event winner Ekstrom, who won the 2016 World RX title at the Estering last year, commented: “It feels so good to take my fourth win of the season and to be alongside Topi again on the podium – I think it has only happened once before [at Hockenheim] and it’s always great to finish alongside your team-mate. Topi has been setting the benchmark with his starts and today he was fastest off the line again.  Now we go to the final round just one point behind Petter [Solberg] in the drivers’ standings.  Obviously the Championship title fight is over but I want to be the best of the rest so that is our only focus when we visit Cape Town for the first time next month.”

Runner-up Hansen added: “My last podium was in Belgium so it is a big relief to get back in the top three this weekend. I took quite a different approach to this race – you can’t force a good result but finishing second on a track where it is hard to overtake is a good result for me. It wasn’t an easy end to the final for me but it was enough for me to finish second place. I put my heart into this championship and it’s great to be here.  Kevin had a very impressive drive this weekend even though he is driving last year’s car – I wanted to be on the podium alongside my brother and hopefully that will happen one day soon.”

Third-placed Heikkinen added: “I have a really good team around me – it has taken me a bit of time to get used to the car this year and I’m very happy to be back on the podium beside Mattias.”

For the first time this year, Johan Kristoffersson failed to reach the final.  The 2017 World RX Champion lost time behind Kevin Eriksson in turn one of his semi-final and was sixth at the end of the first lap.  Meanwhile, last year’s Germany RX winner Eriksson tried to pass Hansen and spun – his Fiesta collected by both Sebastien Loeb and Kristoffersson who ran behind.  For the first time since Belgium in May, Loeb did not make the final.

In the final round of the FIA European Rallycross Championship for Super1600, Hungary’s Krisztian Szabo retained his title. He had secured enough points after the semi-finals to take the title and finished Germany RX sixth overall. Latvia’s Artis Baumanis finished third in Germany and ends the season second overall.   Meanwhile, Jussi-Petteri Leppihalme finished second this weekend to end the season third overall.

Norway’s Lars-Oivind Enerberg was crowned the 2017 TouringCar Champion while Anders Braten and Philip Gehrman finished the season second and third respectively. The Germany RX TouringCar round was won by last year’s Champion Ben-Philip Gundersen while David Nordgard and Braten were second and third.

World RX Managing Director for IMG, Paul Bellamy, concluded: “Today we had two German manufacturers – Volkswagen and Audi – on the front row of the final which is a fantastic story on the marques’ home soil.  Well done to Mattias who took the win in front of 25,000 fans who came to the Estering this weekend to watch the penultimate round of World RX and of course it was great to see a double podium for EKS. It’s fantastic to see Timmy back on the podium for Team Peugeot-Hansen and of course we have crowned two new Euro RX Champions this weekend too so congratulations to Krisztian and Lars-Oivind too. Finally, I want to highlight the heroic effort of Petter who got back in the cockpit after his accident in Riga only two weeks ago, which just goes to show the passion and dedication of our World RX drivers. Now we have a six-week break before our final round of the year in South Africa as the World Championship visits Cape Town for the first time.”

The final round of the 2017 World RX season takes place at the Killarney International Raceway, just ten miles outside of Cape Town, which takes place from 10-12 November.