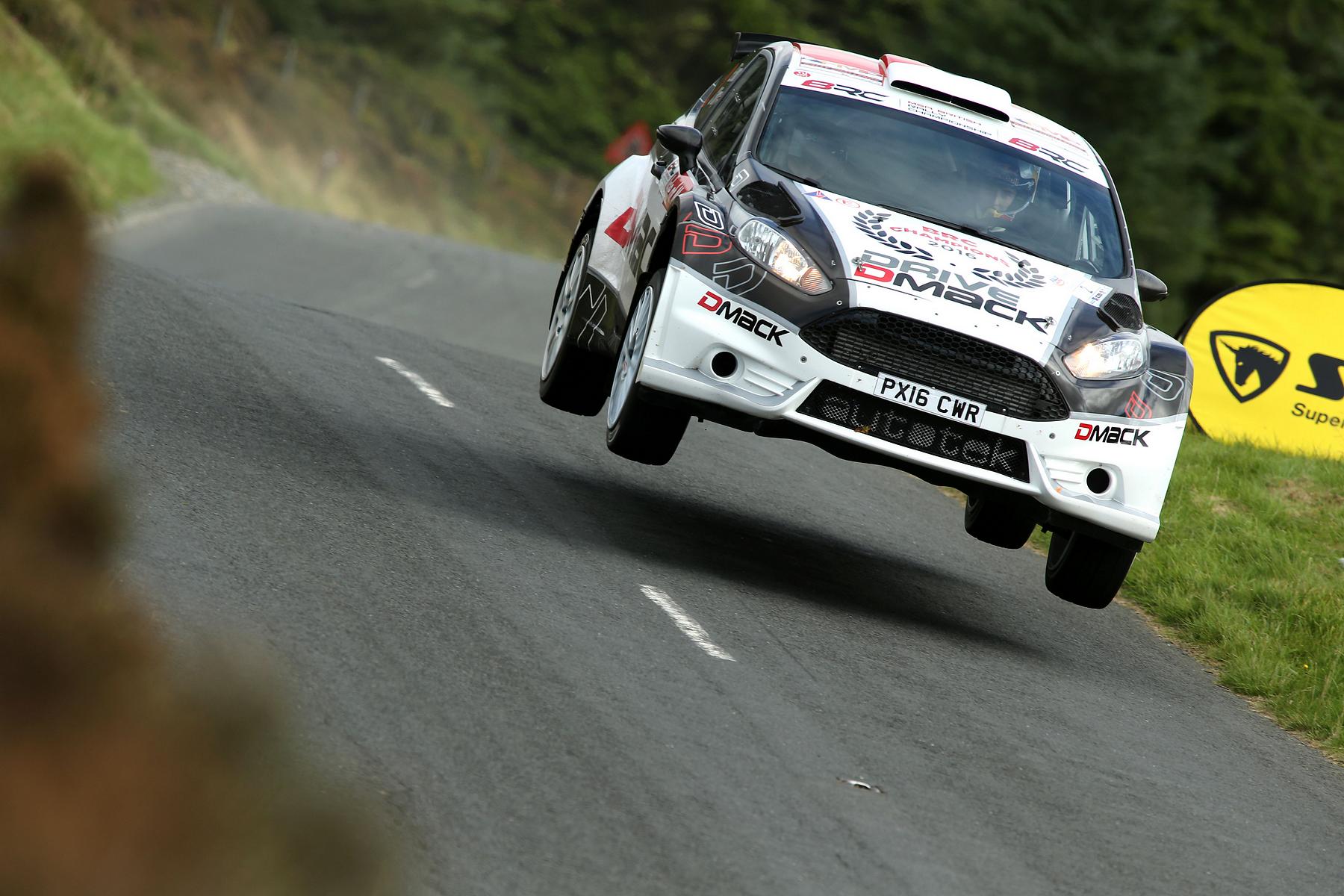 The Welsh duo were once again the class of the field taking the lead on the second stage of the rally, holding their advantage until stage 12 when a drive shaft failure dropped the World Championship stars back into second.
Undeterred after a final day tussle with multiple BRC champion Mark Higgins and co-driver Darren Garrod, Evans and Parry overhauled their teammates and arrived at the famous TT Grandstand for the Ceremonial Finish with a 5.9 second advantage after over 120 competitive stage miles.

The fight for second in Britain’s premier rallying series was to go down to the wire on the rally, with five drivers coming into the event with a mathematical chance of finishing runner up in the championship. That honour went to Tom Cave and James Morgan who put in one of their best performances in 2016 to take second in the BRC category and third overall. Desi Henry and Liam Moynihan recorded their third podium this season rounding out the BRC rostrum in their Skoda Fabia R5.

A spectacular super-special stage on Douglas Promenade got things underway. With the Irish Sea as the backdrop, thousands of spectators lined the one-mile stage with crews battling head-to-head with one another on the streets of the Islands capital.

Breen and Martin drew first blood before Evans and Parry in their Ford Fiesta R5 stretched their legs on the two other stages on the opening evening to hold a 12.1 second gap over Welsh compatriots Tom Cave and James Morgan (Fiesta R5). Breen and Martin suffered engine woes on the third stage, putting paid to their weekend and denying fans of a heavyweight title bout on the picturesque lanes.

Manxman Mark Higgins picked up the mantle to challenge the newly crowned champions. The local star kept Evans honest and was there to strike if the Red Bull athlete encountered any difficulties. Disaster did strike for Elfyn on stage 12 when his Fiesta R5 went into three-wheel-drive after a driveshaft failed, forcing the champion to limp the Fiesta through the two stages of day two. Higgins stole the march and headed into the final day with 17.5 seconds in hand over his younger rival.

A determined Evans woke up on the final day in an inspired mood and started to chip away at Higgins’ lead. The local drivers advantage dipped as low as one tenth of a second going into the penultimate stage. Much to the disappointment of the home crowd, Higgins couldn’t hold off Evans as the Welshman’s momentum saw him inherit the rally lead – stretching out a 5.9 second lead prior to the finish outside the famous TT Grandstand.

Elsewhere, there was to be a monumental scrap for the final podium position on the rally and for second place in the overall championship classifications. Tom Cave, on his first visit to the island, showed remarkable pace in his Michelin-shod Ford Fiesta R5. The Welshman started off cautiously but built the speed to hold a high of second before the local knowledge of Mark Higgins saw him get the better of Cave on day two.

Irishman Desi Henry enjoyed the event-long scrap with Cave with the pair finishing just 11.6 seconds apart. The Skoda Fabia R5 driver notched up his third BRC podium of the year, elevating him up the standings.

Fredrik Ahlin looked to be gaining the fortunes his performances have merited over the season at last, as he challenged for a Rally Isle of Man podium early on. The Swede had not scored a BRC point since his Pirelli Carlisle victory back in May but the Pirelli-backed driver’s season was to go from bad to worse. Losing his intercom through stage seven, shortly followed by damage to his engine meant the promising Scandinavian, with Norwegian Morten Erik Abrahamson alongside, went no further on the fast-flowing stages, and was out of the fight for second place in the championship as a result.

BRC2 Champion Matt Edwards continued his successful graduation into the BRC top flight with a fine fourth in the Swift Group backed Fiesta R5, while Jonathan Greer brought the sole remaining Citroen DS3 R5 home to round out the top five BRC runners.

In the DMACK Junior British Rally Championship, Vauxhall ADAM R2 driver Robert Duggan could do no wrong once again with the able Gerard Conway guiding him through the three-day event. The Irish pair made it five wins this season and firmly cemented their championship success on the Island event. Such was Duggan’s pace, he also collected a handful of outright points, putting more powerful cars behind him on the results sheet. He was also the first front-wheel-drive car home with only more powerful R5 cars ahead of him.

It was a titanic battle behind to sort out the remainder of the championship positions as both Sindre Furuseth and Mattias Adielsson were in with a chance of taking second in the Junior series.
Furuseth admitted he couldn’t beat Duggan’s Tarmac experience as he was only contesting his second ever Tarmac rally himself. The Norwegian, in his Renault Twingo R2, came close on the opening day – just a handful of seconds off the Irishman. With a mature approach, Sindre set respectable times and grew in confidence stage after stage, creating a good gap to secure second on the road and second in the DMACK Junior BRC.

Mattias Adielsson in a Vauxhall ADAM R2 and Adam Bustard in a Ford Fiesta R2T were locked into an event long battle. Bustard held the advantage on the opening leg of the event before the Swede clawed his way back on the final morning. Bustard threw caution to the wind on the final few stages to topple Adielsson on the very final test of the rally, beating the Swede by 6.2 seconds upon the cars’ return to Douglas.

Josh Cornwell, Blair Brown and Nabila Tejpar all made it to the end of the demanding event to chalk up solid points, elevating them up the championship standings.

The National Rally Cup was to go down to the wire on the final round of the season between Robert Blomberg and Donnie Macdonald. Series leader Blomberg came into the showdown on form after a hat-trick of victories. The Swede needed fourth place or better in the class results to take the title back to Sweden.

Donnie Macdoanld went out and did what he had to do, blaze a trail and win the NRC class. The Scot in his Mitsubishi Evo 9 performed a stunning display to put himself in the top 10 overall on the Manx International event. Unfortunately, it was not enough. Despite finishing 16 places apart on the leader board, Blomberg, in his Mitsubishi Mirage, was the second NRC driver home and therefore lifted the trophy at the end of the event.

In the BRC3 category, Northern Irishman Will Corry put on a stunning display in the striking Toyota GT86 CS-R3, hustling the rear-wheel-drive Japanese machine around the island lanes, much to the delight of the thousands of spectators stage side. In BRC4, Marty Gallagher in his Peugeot 208 R2 notched his second BRC4 win of the year with Kumho-backed Tony Simpson in second – the 2016 BRC4 champion.

Quotes from Rally Isle of Man:

“It has been a long and tough weekend and it has been challenging throughout. I was still finding out a lot about the car and tyres as we didn’t test beforehand so there was a lot of tweaking to get the car perfect. I wanted to try and go for it and build a comfortable lead and then manage that, but then we hit trouble with drive shaft problems, which cost us nearly a minute. The fight was then on and it was a great battle with Mark [Higgins] to try and claw the time back. To do it on stages where he has so much local knowledge was hard as I haven’t been on these roads since 2010!

“To take victory is the icing on the cake for not only me but the whole team. To give them the teams’ championship was ultimately the reason for coming here and I was maybe selfish as well as I wanted to take the fight to Mark and win the event. The win tops off a great year in the BRC and a great reward to DMACK and the whole team for their hard work in 2016.”

“It was a long three days and having never been here before I didn’t know what to expect with the calibre of drivers on the entry list. We knew what we had to do to take second in the championship. When Fredrik [Ahlin] retired the pressure lifted from us and then I found it difficult to get into a rhythm so I had to revaluate. It was a good scrap with Desi [Henry] all weekend but I didn’t want to get into that fight as the sole aim was the championship, but I couldn’t help myself as I kept asking James [Morgan] what times Desi Henry had done!

“I am really pleased to have taken second in the series. It was a realistic target at the start of the year and to finish behind Elfyn who has driven brilliantly all year is a real achievement and I want to thank the whole team, sponsors, James and everyone involved. It’s been a great year.”

“The stages are so fast and challenging you had to become half racing driver, half rally driver as you go from fast flowing wide roads like a motorway into very technical, tight and twisty sections as wide as the car.
“I really enjoyed the event. The weather was great and I enjoyed the battle with Tom Cave throughout the weekend. The last loop saw us take the wrong compound of tyre which meant we couldn’t push on as much as we hoped but another podium and vital experience for next year has been achieved.”

From the word go it was very tough, tricky and very challenging and with the title pressure off I just wanted to go for the win and set a really good pace. It all went according to plan as we had a great weekend, the car was faultless and the Vauxhall team did another fantastic job. To get a win on the Isle of Man is quite special, it’s such a famous rally and to be top two-wheel-drive car with nothing but R5 cars in front can’t get much better than that.”

(All Joker nominations have been played. Round 7 – Isle of Man offered double points. Every driver dropped one score)

The full results and championship points can be found at www.msabrc.com