ERIKSSON AND ÖSTLUND CELEBRATE THE TASTE OF SWEDE SUCCESS 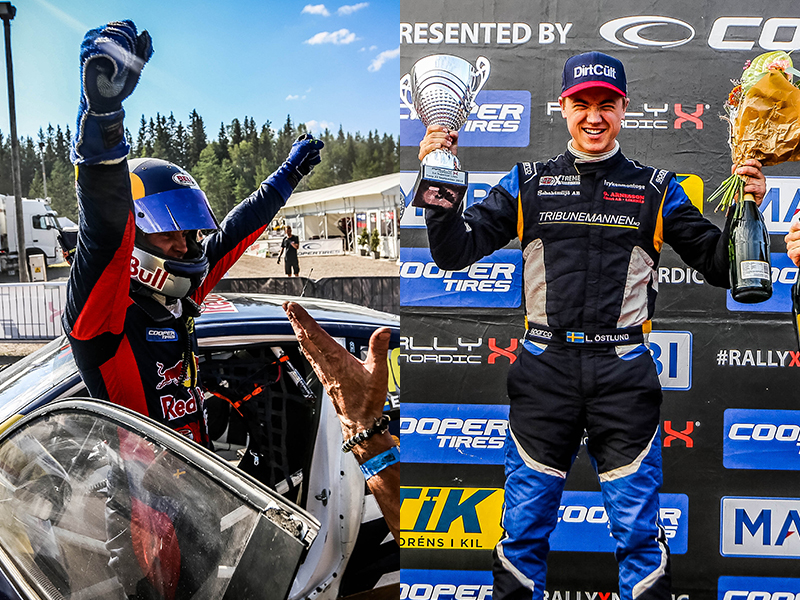 Spearheading the Honda Civic Supercar’s first full season in European competition, Eriksson was on the pace from the outset. Just shy of the podium in the Höljes curtain-raiser back in May, the 20-year-old reached the highest step of the rostrum in round two and thereafter did not finish outside of the top three until the Tierp finale, when a freak suspension breakage sent him spearing out of the race lead and into the tyre barriers.

That denied Eriksson what would have been a commanding fourth victory of the season and agonisingly cost him the Nordic crown by a single point, but as he reflects upon his achievements overall and his maiden Swedish title, he does so with an overwhelming sense of a job well done.

“It’s been a good season,” he acknowledged. “There were a lot of unknowns at the start of the year. We expected to be quick given the Honda’s form in the US, but the style and diversity of the tracks is different in Europe so there’s always that question mark. The Civic was superb all year, though, and there were times when it was the fastest car outright against more ‘proven’ opposition, which is testament to the brilliant preparation by OMSE.

“I was surprised by how competitive we were at Finnskogbanen, which is a super-short, narrow track, and Nysum was a really satisfying event. After lucking into the win a little bit at Höljes, to repeat the result on pure pace in Denmark and take a maximum score away from that weekend was fantastic and gave us a big confidence boost for the rest of the season.

“Robin [Larsson] and I always seemed to be around each other on-track, and Jere [Kalliokoski] was obviously up there too until the last round. It was a hard but fair battle throughout, and I think I drove well. To come away with five podiums out of seven – including three wins – was great, and we would have ended the season with four wins but for what happened at Tierp.

“To secure my first Swedish title was very rewarding, and now our aim is to help Fraser McConnell to win ARX 2 in the US this weekend, after which it will be full focus on Cape Town – and the RX2 season finale.”

Countryman Östlund enjoyed a similarly successful season, his first full-time assault on RallyX Nordic silverware. Victories at Finnskogbanen and Tierp were the highlights of a stellar campaign, which also included podiums at Höljes, Nysum and Riga.

Having narrowly missed out on a top three championship finish in the domestic Supercar Lites series in 2018, the 19-year-old deservedly clinched the crown 12 months on, and fell just ten points short of the overall Nordic laurels at the end of a hard-fought duel with Ben-Philip Gundersen.

“I’m super happy,” enthused the three-time Swedish Crosskart Champion. “It’s been a really fun season, with a lot of good racing. Aside from Höljes obviously, I didn’t really have much prior experience of the circuits on the calendar so we weren’t too sure how we would get on and being honest, I wasn’t expecting to achieve such strong results and to be so quick at every track.

“The more laps I got in the car, though, the faster I was able to get up-to-speed at each event and we didn’t make many mistakes – that was one of the keys, I think. Given the strength of the competition in Nordic’s Supercar Lites class this year – with five different winners and ten podium-finishers – we really couldn’t afford to slip up or leave anything on the table.

“Considering I’m still quite ‘green’ in Supercar Lites, having such a great team around me at OMSE made a huge difference. Both Kevin and Sebastian Eriksson were always on-hand with advice and support, which translated into strong results, and to end the season on the top step of the podium was just perfect.”