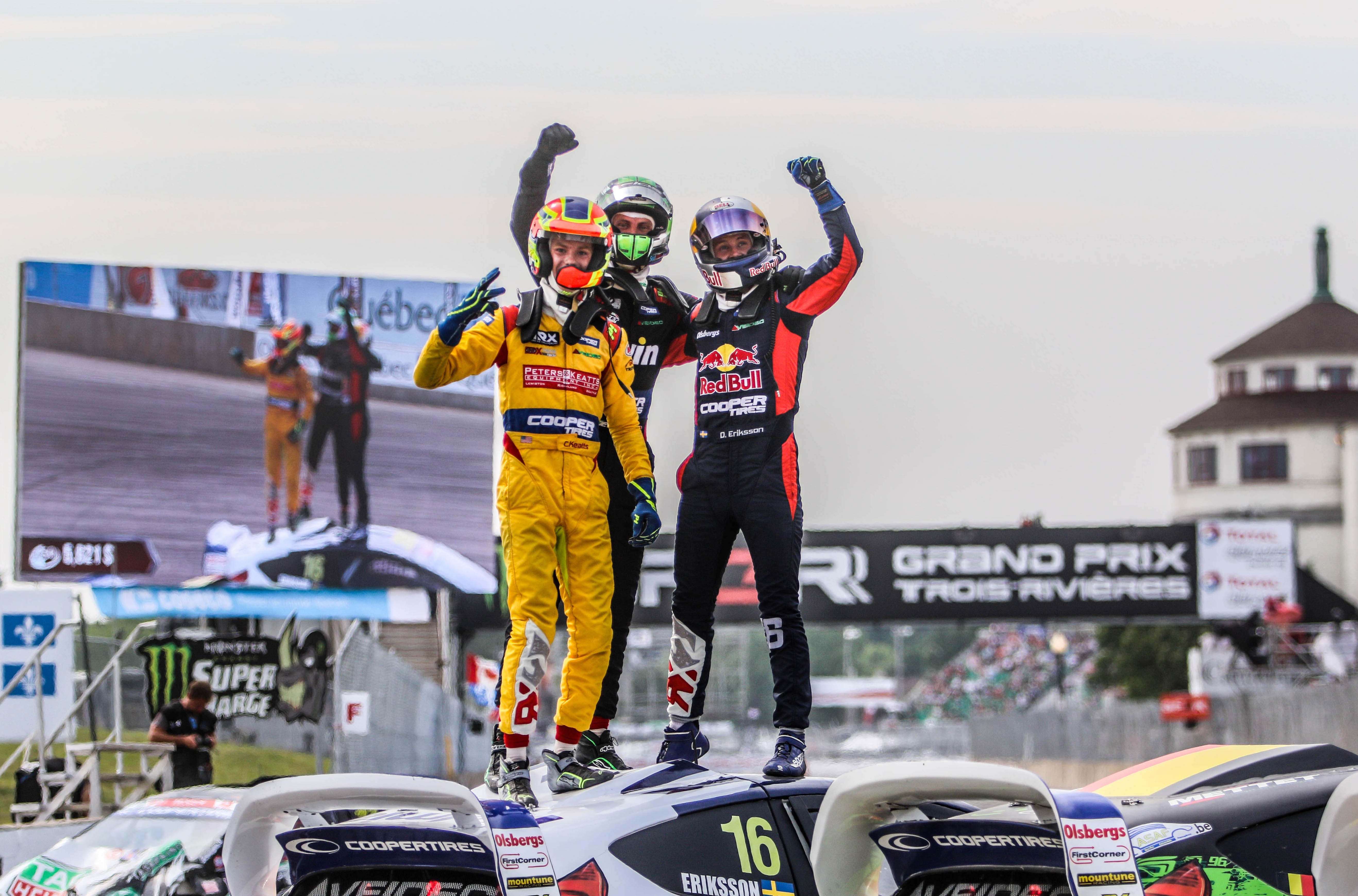 With his second victory of the season, Oliver Eriksson leads De Ridder and Keatts in a historic OMSE podium lock-out.

Eriksson re-established his advantage at the top of the RX2 International Series presented by Cooper Tires standings as the championship sped across the Atlantic to Trois-Rivières in Canada this weekend (4/5 August), taking a historic Olsbergs MSE one-two-three.

Having given his best to his OMSE team-mate Guillaume De Ridder in Hell and on home turf at Höljes, Eriksson was determined to redress the balance – and he succeeded. Quickest from Q2 onwards, the championship leader’s success was assisted by strong starts that meant he invariably reached the first corner at the front of the field, insuring he held the lead.

“It’s been an almost perfect weekend,”  said Eriksson. “I missed out on a completely clean sweep by only one tenth-of-a-second – it was seven tenths at Silverstone, so I’m getting closer!

“My starts were quick and consistent throughout, and that was key to the end result, I think, in a one-make series where everyone is so competitive on lap times. It meant I could always control the pace and focus on driving my own race.”

De Ridder was ultimately Eriksson’s closest rival around the fastest track on the calendar, coming home second to keep the title fight very much alive heading into the remaining two rounds of the 2018 campaign. To crown OMSE’s joy, Cole Keatts – competing in his ‘home’ event – not only made the final for the first time but went on to join his two team-mates on the podium in a brilliant breakthrough performance.

De Ridder said:“The weekend started off great for me with a win in Q1, but after that, things got a bit more complicated. There was more grip down on the grid than I’m used to, and I think my lack of experience in that respect showed compared to Oliver [Eriksson].

“I struggled slightly to get the car off the line, which kept leaving me in traffic and made it difficult to settle into my own rhythm. ”

It was De Ridder that struck first in the qualifying races with a hard-fought win in Q1, but from there on, Eriksson entered his stride and duly stole the top spot in the intermediate classification. The Belgian had to dig deep to secure second place – and with it pole position for the other semi-final – after retiring from Q3 with broken steering, the legacy of a joker lap clash with Henrik Krogstad.

Conner Martell was fast and feisty throughout on his way to third position, with the American continuing to go from strength-to-strength in his maiden season in RX2, with Ben-Philip Gundersen surviving a Q4 brush with the wall to slot into fourth.

Finnish teenager Sami-Matti Trogen – the youngest competitor in the series at just 16 – impressed with both his pace and racecraft to take fifth, ahead of Sports Racing Technologies’ Vasiliy Gryazin, JC Raceteknik ace Krogstad and the Norwegian’s team-mate William Nilsson, who had to battle back from a difficult opening day.

SET Promotion’s Jami Kalliomäki and Keatts rounded out the top ten, with Sondre Evjen and Simon Syversen completing the semi-final protagonists, as the luckless Nathan Heathcote missed out following a torrid run.

Pole-sitter Eriksson fended off an early attack from Martell to stand his ground at the start of the first semi-final, with Krogstad settling into third. The American and Norwegian kept the pressure on the race leader as the top three pulled away, but Trogen replicated the same early joker tactic he had employed to in the qualifying races to overtake Krogstad on the penultimate lap.

Eriksson held firm to win from the hard-charging Martell, as Trogen staved off Krogstad to reach the final for the first time in his fledgling RX2 career. Kalliomäki and Evjen completed the finishers a little further back.

As the front row-sitters squabbled into turn one at the start of semi-final two, Keatts – from the back of the grid – left his braking as late as he dared and spectacularly swept around the outside to snatch the lead ahead of Gundersen and Nilsson, with pole-sitter De Ridder finding himself shuffled down to fourth.

As his pursuers scrapped amongst themselves – Nilsson and De Ridder taking advantage of a mistake by Gundersen at the end of the opening lap to move up to second and third – Keatts held sway at the head of the order, but an early joker from Gryazin allowed the Latvian to leapfrog them all.

De Ridder similarly jumped Keatts to steal second from his OMSE team-mate, with Nilsson narrowly failing to progress and Syversen and Gundersen rounding out the result.

Eriksson converted pole position into the lead at lights-out, with De Ridder also making a sprightly getaway to dive up the inside of the slow-starting Gryazin – but both were outfoxed by Martell, who pulled off his trademark manoeuvre by storming around the outside and up to second.

Trogen’s challenge ended abruptly in the Turn Two tyres as he came unstuck while trying to relieve Keatts of fourth, and the next to fall was Martell, who was really beginning to turn up the wick on Eriksson when an ill-judged overtaking attempt at turn five saw the Team Färén ace clip the tyre stack, spinning him broadside across the track.

That delayed the pursuing De Ridder and Keatts – albeit not enough to drop them into the clutches of Gryazin – and the pair duly went on to follow Eriksson home in second and third to secure a famous podium lock-out for OMSE.

For Eriksson, it completed a perfect weekend’s score that has opened his championship lead back out to 11 points, with a total of 60 remaining in play – at Lohéac in France on 1/2 September and Cape Town in South Africa on 24/25 November.