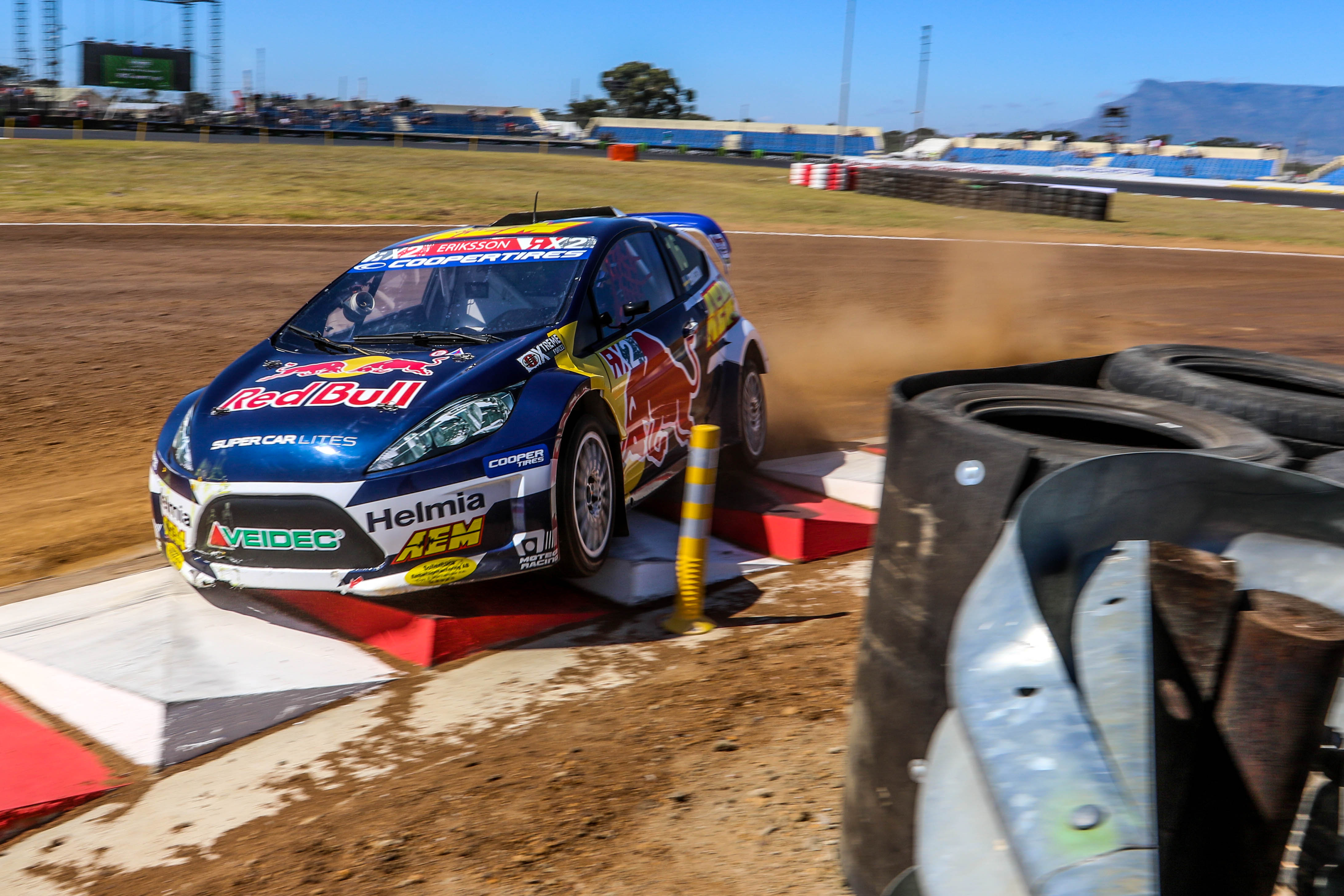 Ben-Philip Gundersen ended the 2018 RX2 International Series presented by Cooper Tires campaign the same way he had started it – on the top step of the podium – but the real winner in South Africa was Oliver Eriksson, who survived a dramatic weekend to clinch the coveted Drivers’ crown.

On his first visit to Cape Town’s Killarney International Raceway, Gundersen was on the pace from the outset, topping the intermediate classification and lining up on the front row of the grid for the all-important final.

After early leader Eriksson suddenly slowed with electrical issues, his Norwegian rival assumed control and thereafter never looked back, bookending his maiden campaign of RX2 competition with victories having similarly won the Mettet curtain-raiser back in May.

Gundersen led home a JC Raceteknik one-two ahead of countryman and team-mate Sondre Evjen, with Latvia’s Vasiliy Gryazin third for Sports Racing Technologies. Although Eriksson failed to finish the final, he had already done enough to lift the laurels in the official FIA World Rallycross Championship feeder series. Despite having never seen the track before, Gundersen was a quick learner at Killarney, winning both Q1 and Q4 to impressively claim the prime position in the standings going into the semi-finals.

Prior to the weekend, Eriksson’s Olsbergs MSE stablemate Guillaume De Ridder was the only man mathematically capable of spoiling the Swede’s party, and the Belgian was arguably the fastest driver in the qualifying stages in South Africa – albeit frequently caught up in traffic. He wound up second in the intermediate classification, with Eriksson third – a result that kept the title duel going by a single point.

Gryazin placed fourth following a consistently strong run, with Henrik Krogstad fifth for JC Raceteknik – the Norwegian lucky to survive a disagreement with the tyre barriers in his Q4 contest that caused the race to be red-flagged. SET Promotion’s ‘Fast Finns’ Jami Kalliomäki and Sami-Matti Trogen were evenly-matched in sixth and seventh, both unleashing an eye-catching turn-of-speed along the way.

Cole Keatts bagged the last semi-final spot in 12th for Olsbergs MSE as the American teenager bounced back from a Q1 retirement with a solid performance. That meant Swedish stars Anders Michalak and Simon Olofsson missed out, in company with 2018 FIA European Rallycross Supercar Champion Reinis Nitišs – who endured a troubled RX2 debut – and hometown hero Ashley Haigh-Smith. Eriksson got the jump on pole-sitter Gundersen at lights-out in the first of the South African semi-finals, with the duo thereafter holding position all the way to the chequered flag – confirming the Swede as the 2018 RX2 champion.

Behind them, Krogstad dropped out of third place with wheel bearing failure, promoting Trogen – who had been pushing the Norwegian hard – into the final for the third time this season. Heathcote got his car up on two wheels in his efforts to seize the position for himself, allowing team-mate Martell – delayed by an early coming-together with the wall – to demote the Briton to fifth.

There was even greater drama at the start of semi-final two, as De Ridder was pushed off the grid after his car developed an electrical problem. In the pole-sitter’s absence, Gryazin led away, with Nilsson and Keatts taking advantage of a Turn Two tussle between Evjen and Kalliomäki to advance to second and third.

Nilsson proceeded to hunt Gryazin down and had almost latched onto the Latvian’s tail when fading brakes obliged him to back off on the last lap, but second place was comfortably sufficient to secure his spot in the final. Behind, however, it was rather more frantic. The Evjen/Kalliomäki duel was rejoined once the joker laps had been completed, but Keatts emerged still narrowly ahead of both of them, only to clip the tyre barrier and spin out heading onto the last lap. Evjen gratefully inherited the position, with Kalliomäki trailing across the line with damage following an unsuccessful late bid to snatch third. Eriksson made the best start to convert pole position into the lead in the final, with Gundersen slotting into second following contact with Gryazin on the run down to Turn One, enabling Trogen to similarly leapfrog the SRT car into third.

The race was turned on its head a lap later, however, when Eriksson suddenly slowed and stopped with an electrical issue. Gundersen and Trogen managed to sneak past, but Gryazin – unsighted by the dust – ploughed into the back of the newly-crowned champion, resulting in significant front end damage.

Trogen was the next to fall foul of ill-fortune as the Finn picked up a puncture, with Nilsson spectacularly hitting the Turn Two wall in avoidance and rotating across the track. In a battle between the walking wounded, Gundersen went on to triumph from Evjen and Gryazin, as the delayed Nilsson valiantly gave chase in fourth and Trogen hobbled across the line in fifth.

With Eriksson confirmed as champion from De Ridder and Krogstad, the result vaulted Gundersen past Gryazin into fourth in the overall table, as just three points blanketed third to fifth in the final reckoning.

Oliver Eriksson (Champion): “This means everything to me – it’s an amazing feeling. It’s been a really hard-fought season, but at the same time, so much fun with a lot of good, clean racing on the track and a great camaraderie between the drivers in the paddock. It’s taught me a lot and helped to make me more complete as a competitor. The OMSE boys work day and night both at the circuit and back at the workshop to improve every single detail, so all credit to them for a phenomenal team effort. Guillaume [De Ridder] has been a great rival, team-mate and above all friend; we come from very different racing backgrounds, but right from day one, we shared everything and that has enabled us to really learn a lot from each other. It was rough luck for him in the semi-final, and then I had my own bad luck in the final. I felt really good out there and was beginning to build a gap, but the car just shut down and there was nothing I could do about it. We clearly weren’t meant to win in Cape Town today, but by that stage, fortunately, the main job was done and the most important trophy was already in the bag.”