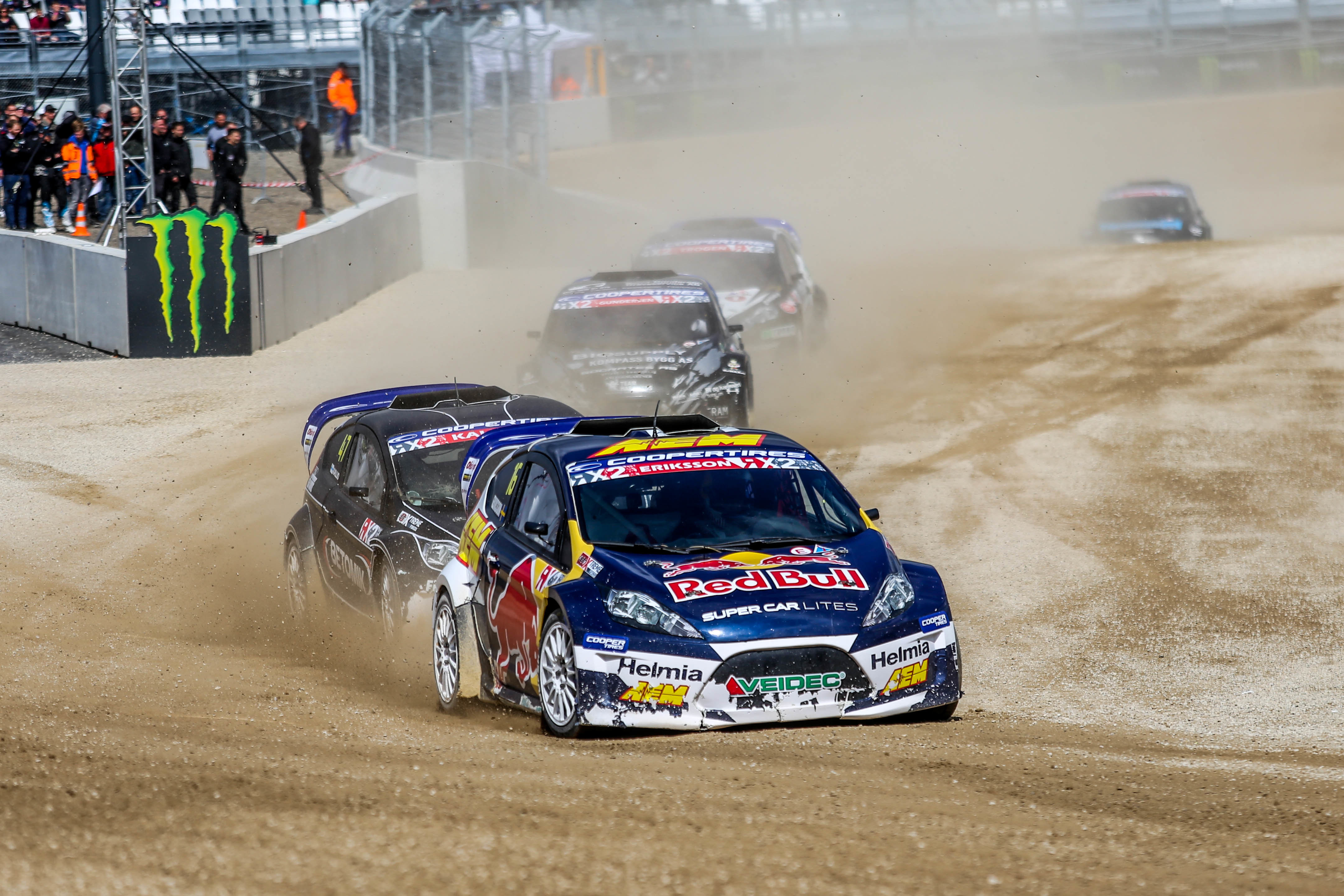 Early-season championship leader Oliver Eriksson battled back from a difficult opening day in Belgium to seal his second success from as many starts in the 2019 RX2 International Series presented by Cooper Tires – with a hard-fought victory at legendary Formula 1 venue Spa-Francorchamps.

Eriksson sat only sixth in the standings at the end of Saturday’s first two qualifying races, having fallen foul of a malfunctioning windscreen wiper in free practice, made a rare mistake in the joker lap in Q1 and picked up not one but two punctures in Q2.

That handed the initiative firmly to Olsbergs MSE stablemate Jesse Kallio, but Eriksson wasn’t done yet, and with both drivers winning their respective semi-finals, they lined up side-by-side on the front row of the grid for the all-important final.

Boldly keeping his foot planted on the accelerator, Eriksson swept around the outside of Kallio into Turn One and thereafter never looked back. Keeping the pressure on throughout, his team-mate flashed across the finish line less than four-tenths-of-a-second behind, with JC Raceteknik’s Ben-Philip Gundersen belatedly kick-starting his title challenge as he rounded out the rostrum in third.

Having already announced his arrival in RX2 with a podium finish on his debut in last month’s Barcelona curtain-raiser, Kallio confirmed his status as one of the series’ fastest-rising young stars with a commanding performance to top the intermediate rankings.

The Finn set the pace come rain and shine during the qualifying stages in the iconic Ardennes forest, pushed hardest by Eriksson and Gundersen. After losing ground on Saturday, the Swede bounced back by dominating Q3, but he and Gundersen made light contact at the start of Q4, sending the Norwegian wide and dropping him from second to third in the overall classification.

Like in Spain, Fraser McConnell in the third OMSE car impressed with both his speed and consistency, as the Jamaican secured fourth place – and with it a front row semi-final grid slot – ahead of Vasiliy Gryazin (Sports Racing Technologies) and Simon Olofsson, who vaulted up the order courtesy of a rapid run in Q4.

Sami-Matti Trogen (SET Promotion) recovered from a slow start on Saturday to salvage seventh in the table, with fellow teenager William Nilsson eighth for JC Raceteknik, the Swede producing a gutsy performance as he continues to recover from his impact with the Barcelona barriers a fortnight ago. Anders Michalak, Jimmie Walfridson (JC Raceteknik), Damien Meunier (Team Färén) and local hero Steve Volders completed the semi-finalists, with Albert Llovera narrowly missing out.

Kallio converted pole position into the lead when the lights went out in semi-final one, pursued by fellow front row starter Gundersen, and the order would remain that way to the chequered flag, the pair untroubled by the drama unfolding behind.

A three-way tussle for third on the opening lap predictably ended in tears, as a squeeze resulted in Michalak being turned around by Gryazin on the run up Eau Rouge, allowing the opportunistic Meunier to sneak through into third. The Frenchman, however, could not quite withstand the threat of a charging Trogen, who snatched the last final spot.

In the second semi-final, Eriksson led McConnell away from the line in an OMSE one-two, with Nilsson intelligently taking a wide approach into Turn One to get the undercut on countryman Olofsson on the exit for third. The latter tried to regain the position going into the hairpin at the top of Eau Rouge, but rather than paying off, his ambitious overtaking attempt actually ended up delaying the Swede and allowing the top three to break away.

Eriksson’s win was never really in doubt, but McConnell had to keep an eye in his mirrors for Nilsson, who continued to chase hard and crossed the finish line barely a second in his wake. Behind them, Olofsson was on the fightback, muscling his way past Walfridson with a gutsy move for fourth – if not quite into the final.

In a battle of the late-brakers, Eriksson proved to be the braver into Turn One for the first time, sweeping around the outside of his pole-sitting team-mate to grab the lead. Notwithstanding a slight scare when he sideswiped the wall on lap two, the reigning champion was thereafter able to fend Kallio off all the way to the chequered flag.

Gundersen followed the pair home a little way back in third to banish the memories of a difficult season curtain-raiser in Barcelona, while Trogen passed McConnell into the first corner for fourth place and maintained the position throughout – even eyeing an assault on the podium at one point. Although a late puncture put paid to any hopes of that, the Finnish teenager – the youngest driver in the field – defended well to keep McConnell and Nilsson at bay, with both crawling all over the back of the SET Promotion car in the closing stages.

Next up is another famous Formula 1 venue – Silverstone (25/26 May) – where Eriksson will arrive with an extended margin at the top of the title standings, but with a whole host of hungry rivals all eager to unseat him at the celebrated ‘Home of British Motor Sport’.

Oliver Eriksson (1st): “There were times over the weekend when it really didn’t feel like it was going to end this way! As a team, we had great pace but until the final, Jesse seemed to always be one step ahead of me, so when we lined up alongside each other on the front row, I knew I needed to beat him off the line because the joker was so short that it was difficult to make a difference there. I just hooked it up, sent it and hoped for the best – and it paid off! After that, it was a pretty spotless race, to be honest, although there was a ‘moment’ when I clipped the concrete wall at the end of the second lap and the car momentarily switched direction. It was a decent hit and I thought that was game over, but thankfully, these Supercar Lites cars are built to withstand a lot of abuse! Jesse was briefly able to get up my inside, but I managed to shut the door just in time. That was a lucky escape, but I guess we had our fair share of bad luck on Saturday. It’s been a near-perfect start to the season overall – two from two. We’re learning all the time and are definitely the team to beat right now – and that feels great.”

Jesse Kallio (2nd): “Almost the perfect weekend! I’m obviously a little bit disappointed because I always want to win and we came so close, but I have to be happy overall. At the end of the day, I need to remind myself it was only my second event in RX2 and to have taken two podiums from the first two weekends and be sitting second in the championship is a great start to the season. Spa was definitely a step forward from Barcelona in terms of competitiveness, and it was great to see how similar my lap times were to Oliver’s. It was also a real confidence boost to be top qualifier for the first time in RX2. Once Oli got past me at the start of the final, I knew it was going to be tough to get back ahead because we’d been so close on pace all weekend. It’s difficult here with such a tight inside line into Turn One – you don’t want to run too close to the wall, and whoever is on your outside can carry more speed through the corner. Still, we know we are capable of fighting for victory now when we put all the pieces of the puzzle together, so I need to make sure I learn as much as I can from Oli’s data and come back even stronger at Silverstone. After finishing third in Spain and second here, there can only really be one goal going there…”

Ben-Philip Gundersen (3rd): “I’m happy with third place – I really needed a good weekend after Barcelona, because we lost a lot of points there and two bad results at the start of the season would have been pretty disastrous championship-wise. I enjoyed the circuit at Spa – they’ve done a great job with it – and the qualifying races went well, with the exception of Q4, when Oliver and I touched slightly at the start, which sent me out wide. That was just racing, though – I would probably have done the same in his shoes. We weren’t quite as quick in the dry on Sunday as we had been in the wet on Saturday and we didn’t really have the pace to rival the two Olsbergs boys ahead in the final, but congratulations to them on the one-two finish. Like in Spain, we were amongst the three fastest drivers on the track most of the time, which is encouraging – now we need to figure out how to find that little bit extra to properly take the fight to them next time…”

Andreas Eriksson, RX2 International Series presented by Cooper Tires CEO: “What a show Spa put on for us on our debut here, and I think we gave the spectators a similarly exciting show in return! As a race circuit, Spa has established a legendary reputation in the sport, and I see no reason why the rallycross track should not go on to do the same – all the ingredients are there. Its design truly brought out the best in the RX2 drivers, with some of the wheel-to-wheel battles through the iconic Eau Rouge corner pulling everybody to their feet. The racing was first-class, and it was another superb demonstration of just why these guys are very much the future of our sport – a future that, as I have said before, is in extremely safe hands.”