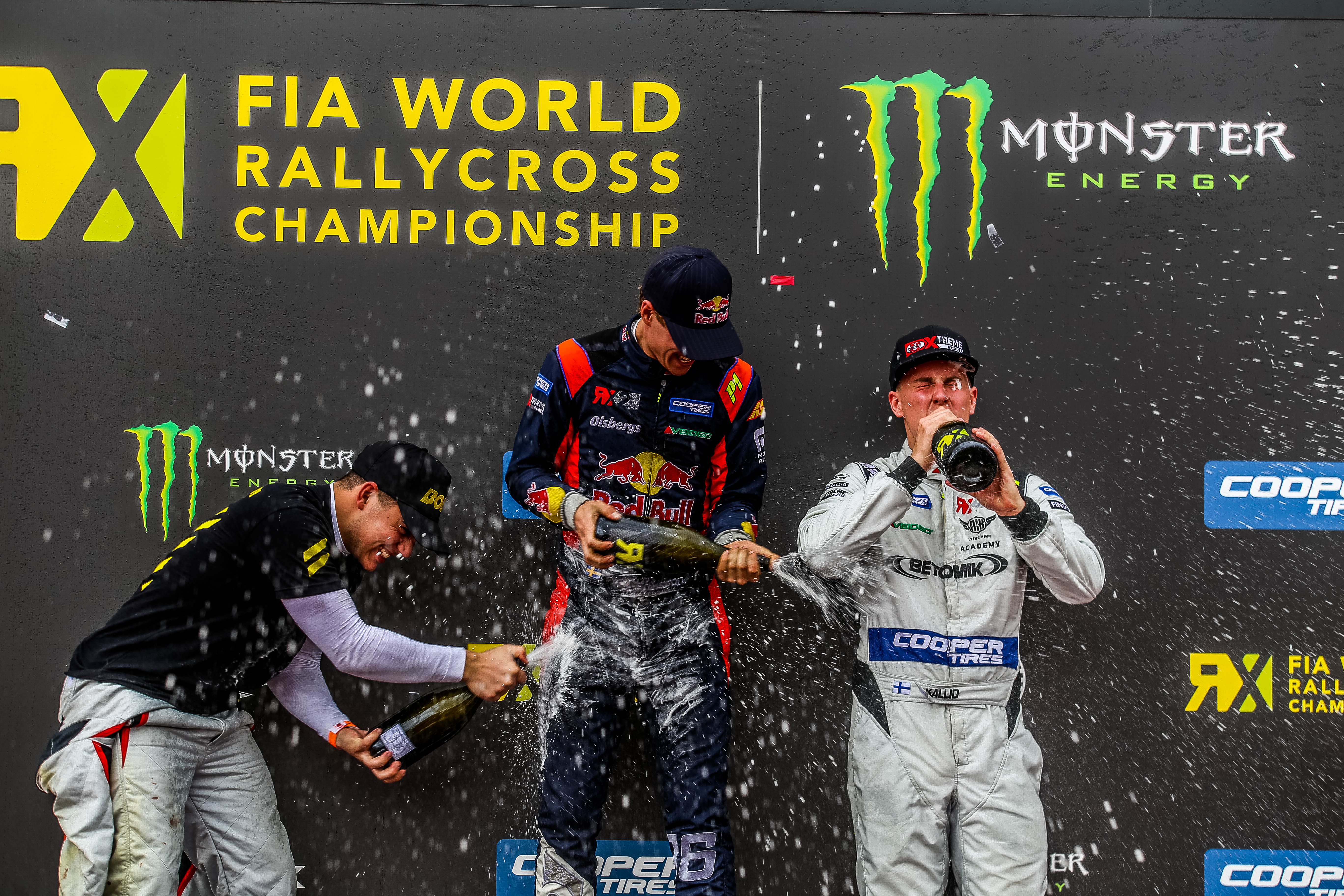 The OMSE trio were on fine form throughout at the iconic Spanish Grand Prix venue, and not even a first corner clash with JC Raceteknik’s Ben-Philip Gundersen in Q3 could derail their charge. Eriksson had to draw upon all of his experience to keep his two rapid team-mates at bay, as both McConnell and Kallio – who waged a fierce duel for second in the final – demonstrated that the Swede will have things far from his own way this season.

Eriksson won three of the four qualifying contests in Spain, only missing out in Q3 when a first corner squeeze initiated by Gundersen sent him into the tyre barriers and left Kallio with race-ending damage. The coming-together had serious repercussions for the Norwegian – a pre-season title favourite in his second full campaign in the official FIA World Rallycross Championship feeder series – as disqualification for his part in the incident meant he missed out on making it through to the semi-finals.

McConnell recovered from a spin into the barriers in Q1 to fight his way to second in the intermediate classification, turning heads with the fastest time in Q3 and second-best time in Q4 on his European racing debut. Kallio was just behind in third after rivalling Eriksson for pace throughout the qualifying stages.

Gryazin (Sports Racing Technologies) was a consistent contender in fourth, with Trogen responding well to his Q1 retirement by vaulting back up the order into fifth courtesy of a string of quick times. That placed the Finn ahead of French Rallycross Championship Supercar star Meunier, who impressed more with every race, belying the fact that he had only had one test in Supercar Lites machinery prior to the weekend.

Similarly making the semi-finals were Swedish trio Anders Michalak, Simon Olofsson and William Nilsson, the latter despite losing time to damaged steering and brake issues on Saturday. Reigning EuroRX TouringCar Champion Steve Volders rounded out the top ten on his series bow, ahead of Jimmie Walfridson (JC Raceteknik) and ‘home’ hero Albert Llovera, reaching the semi-finals for the first time in his RX2 career to the evident delight of the partisan crowds filling the Barcelona grandstands.

Eriksson withstood the threat posed by Kallio in the first semi-final, with the Finn shadowing his OMSE stablemate from lights-to-flag. Trogen ran third throughout to safely progress to the final, but behind, the action was somewhat livelier.

Walfridson missed his braking point into the first corner, clipping JC Raceteknik team-mate Nilsson who was in-turn pushed into Michalak. The latter pair would come together later in the race, too, with light contact at the exit of the joker pitching Nilsson into the gravel and out of contention. Michalak went on to finish fourth, with Walfridson nursing a puncture on his way to fifth.

Rivalling his famous countryman Usain Bolt for out-and-out speed, McConnell commanded the second semi-final as Gryazin gave chase, but the battle for third – and the last available final spot – was fierce. Olofsson challenged Meunier around the outside of Turn One on the opening lap, but the Frenchman held his ground before the pair came together again moments later, along with Volders.

The contact sent Meunier wide and Volders briefly airborne, and whilst Olofsson took the chequered flag third, the Swede was subsequently penalised for the collision, promoting his hard-charging Team Färén rival into the final. Volders placed fifth ahead of Llovera, for whom the result capped his most competitive RX2 weekend to-date.

Eriksson converted pole position into the race lead at the start and thereafter never looked back, inching away from McConnell to ultimately cross the line just over three seconds clear. He was aided by a sensational duel between the Jamaican and Kallio for the runner-up spoils. The Finn opted to take an early joker, and when McConnell did likewise later in the race, he rejoined practically alongside his OMSE team-mate.

What followed was a drag race along the back straight, before McConnell boldly drove all the way around the outside of Kallio with a scarcely believable pass that brought the appreciative crowd to their feet. The battle for fourth was settled in similar fashion, as Gryazin attempted the same move on Trogen but narrowly failed to pull it off, instead producing a spectacular save when his SRT car got briefly out-of-shape. Meunier completed the finishers in an excellent sixth place.

The action heads next to renowned Belgian Formula 1 venue Spa-Francorchamps in a fortnight’s time (11/12 May), with Eriksson leading the way on 30 points – and the rest of the field firmly focussed on turning the tables.

Oliver Eriksson (1st): “That was pretty close to the perfect weekend – certainly a much better start than last year! The level of competition in RX2 this season is very high – you only have to look at the timesheets to see that and I’ve got two very quick new team-mates, who I was helping out a bit. Fraser [McConnell] and Jesse [Kallio] both did a great job, so all credit to them. Maybe I’ll have to stop giving them quite so much advice considering how close they were! Seriously, though, we’re a very open team at OMSE and we always share data, and as a driver, you always want to be pushed by your team-mates because it makes you raise your own game. That’s what RX2 is all about – developing skills and extracting every last tenth-of-a-second. We had the speed all weekend, and it was important to bounce back quickly after Q3 – it’s all about how you recover in rallycross, and that’s exactly what we did. I drove angry in Q4, and knowing how important pole is in Barcelona given the nature of the first corner, I worked very hard to keep it for every race. Maximum points – I’ll definitely take that!”

Fraser McConnell (2nd): “That was a bit of a rollercoaster to begin with! I guess that’s how this sport goes – the lows are very low but the highs are very high, and we experienced both this weekend. I felt good arriving here, but then I spun on the first lap in practice which knocked my confidence a bit. I was slightly nervous after that and went a touch too aggressive at the start of Q1, which put me in the tyres. I had a few choice words with myself and from there, it was all about building from ground zero again and we just climbed and climbed and climbed. The final was a lot of fun, and I’m sure everybody watching enjoyed the last couple of corners! It was essentially a drag race down the back straight with Jesse [Kallio], and while conscious of obviously not wanting to take each other out, equally, we both wanted that second position. I thought, ‘this guy is as crazy as I am’, so I braked at the apex of the corner, threw the car in sideways and then just planted my foot on the throttle. Hopefully I left a good impression… For my first event in Europe – first time in Europe even – I really couldn’t ask for very much more.”

Jesse Kallio (3rd): “I’m really happy with third place – my goal coming to Barcelona was to reach the podium, and here we are! Big thanks to OMSE for doing such a brilliant job for all three of us – it’s a great team result. I only had two days of testing before the weekend and it was my first time competing with 4WD, but I’ve already established a good feeling in the Supercar Lites car – it’s very easy to drive, which in turn inspires confidence. I proved I’ve got the speed to race right at the front, which is very encouraging, especially given how tight the competition is in RX2. Everybody has the same equipment, which means it comes down to the driver to make the difference and there were some very tough battles out there. I had some really hard but fair and enjoyable fights with my two team-mates over the weekend – it doesn’t get much closer than it did with Fraser [McConnell] in the final and we still managed not to touch at all. We were both trying to brake as late as possible and I just left it a bit too late. He got me this time, but next time I’ll try to pay him back…”

Andreas Eriksson, RX2 International Series presented by Cooper Tires CEO: “What a great start to the new RX2 season here in Barcelona! The racing has been superb – a real masterclass for the Spanish fans from the rallycross stars of the future – and we witnessed some fantastic fights between the experienced RX2 contenders and the series newcomers. To see two rookies on the podium at the end of the weekend was proof of just how competitive it is going to be this year, and the wheel-to-wheel action in the final in particular really had the fans on the edge of their seats. Next, we go to another new venue for RX2 and another classic Formula 1 circuit – Spa – which has always been renowned as somewhere that truly rewards the brave. It’s going to be spectacular!”