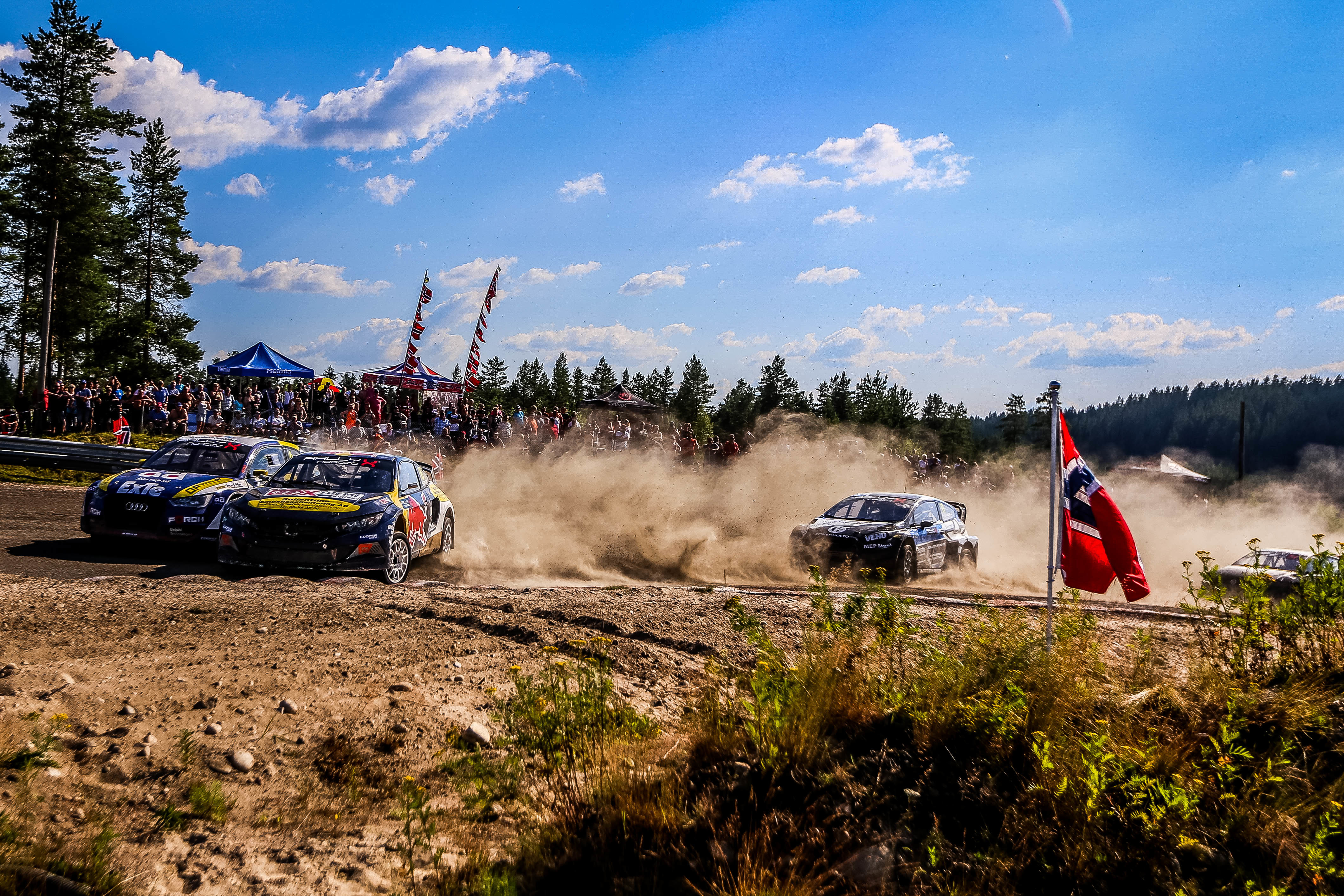 Oliver Eriksson reasserted his authority in round five of the 2019 RallyX Nordic presented by Cooper Tires campaign at Finnskogbanen in Norway last weekend (27/28 July), while local ace Ben-Philip Gundersen looked to be on-course for a popular home victory in the Supercar Lites class until a late puncture handed the initiative to Linus Östlund.

The RallyX Nordic action resumed in the Norwegian forest just a week after the chequered flag had fallen in Latvia. Coined by many as a real drivers’ track, the fast-and-flowing circuit attracted drivers and fans in their droves as local heroes including Gundersen and Thomas Holmen looked to put on a great show in front of their supporters.

Close racing was very much a hallmark of the event, as the stars of the show turned up the heat on a weekend where off-track temperatures soared to 31°C.

Oliver Eriksson emerged as the eventual winner after tight battles throughout the weekend at the top of the Supercar class. The Olsbergs MSE driver dominated the timesheets along with Robin Larsson and Jere Kalliokoski, as they have done for much of the season, with each taking their turn at the top of the pile in the qualifying stages. Eriksson ultimately claimed a semi-final win and swiftly followed it up with victory in the final, his third of the 2019 Nordic season.

“I’ve won more than half of the races now, which feels incredibly good,” enthused the Swede. “It was tough out there, you know; at Turn One, Robin tried to go round the outside of me but I was never going to let that go. I was a bit tough but I had the inside line and could go from there. I made some small mistakes; obviously I was a bit nervous to not hit my marks, but it was enough in the end and I’m so happy!

“I have no idea what was going on behind me, but my spotter told me ‘keep it tight, keep it clean, just do your thing’ and it worked out. First over the finish line and good championship points. There are two events left so a long way still to drive, but we’re ahead so that’s good and I really enjoyed the weekend.”

Latvian winner Larsson produced another eye-catching showing, setting the pace in two of the four qualifying rounds, winning his semi-final and claiming the overall runner-up spot, although the JC Raceteknik man’s day was somewhat hampered by a problem with the throttle in Q3 that forced him to retire.

Strong drives in the remaining races put him in a great position to challenge for the lead into Turn One in the final, but the move failed to come off and dropped the Swede to fourth. He recovered to pass Kalliokoski on the last lap to seal the runner-up spoils.

RallyX Nordic’s own ‘Flying Finn’ racked up yet another podium finish to add to his growing tally in 2019. After seizing the early advantage by going fastest in Q1, Ford Fiesta driver Kalliokoski was never far from the top of the charts but ultimately had to settle for third place in Norway. He will be keen to turn the tables on his rivals on home soil next time out at Kouvola Circuit.

Further down the field, Crister Dalmans impressed with a strong effort to finish fourth in the final, followed by Ulrik Linnemann. The highest-placed Norwegian in the headlining category was Fredrik Magnussen, who wound up sixth overall.

Linus Östlund remained calm and collected throughout the weekend, quietly gathering points in the build-up to the finals before besting his rivals and mastering the car, circuit and sweltering conditions to take his first Nordic victory of 2019 after pole-sitter Ben-Philip Gundersen picked up a puncture.

“This is unbelievable, it’s amazing!” the Swede smiled. “He (Gundersen) got a puncture so I got a bit lucky, but I kept cool and made it to the goal – I am so happy! This is wonderful news for the championship, and I’d like to thank all of my supporters, Olsbergs MSE and everyone who has helped me.”

Östlund was joined on the podium by Mats Oskarsson and Anders Michalak, both drivers taking their first top three finish of the season, with Michalak holding off a late attack from the charging Petter Nårsa.

Whilst the top three shone, the local favourite was out of luck. Gundersen looked set to dominate the weekend after going quickest in the first three rounds of qualifying, but punctures in Q4 and the final dashed his hopes of home glory.

Jimmie Österberg was the man on-form in the ever-competitive CrossCar category, the young Swede taking the championship lead courtesy of a commanding victory ahead of Carcontrol’s Isac Egonsson and JC Raceteknik Juniorteam’s Isak Reiersen.

Local man Markus Gimle Enger narrowly missed out on the podium in fourth overall. Former championship leader Nils Andersson, meanwhile, was unable to capitalise on his early weekend pace, the Swede hitting trouble in the final and only taking the chequered flag sixth.

Kouvola Circuit in Finland will host the penultimate round of the RallyX Nordic campaign, and there will be plenty of local drivers wanting to put on a good show for the enthusiastic Finnish fans. Round six of the 2019 championship takes place on 24/25 August.