ERIKSSON SEALS IT IN STYLE IN SOUTH AFRICA 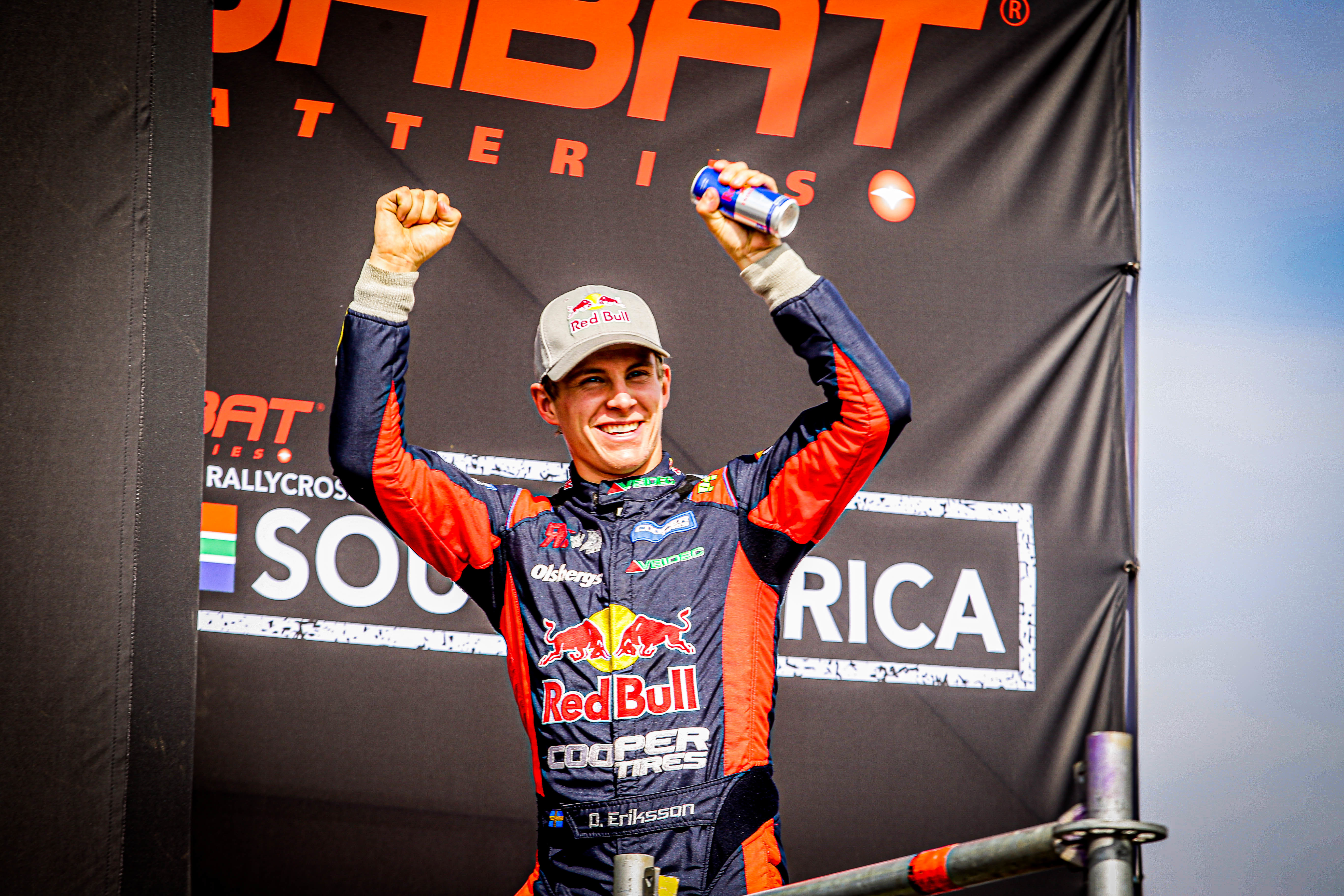 Oliver Eriksson completed the successful defence of his RX2 International Series presented by Cooper Tires title in this weekend’s season finale (9/10 November), crowning his campaign with a peerless performance in front of an appreciative audience in South Africa.

Eriksson has been the class of the field in the official FIA World Rallycross Championship feeder series this year, and he arrived at Cape Town’s Killarney International Raceway holding a commanding 21-point margin over Olsbergs MSE team-mate Jesse Kallio in the drivers’ table.

The Finn’s bid was snuffed out on the opening day through no fault of his own, but still Eriksson was determined to seal it in style – an opportunity denied him 12 months previously by electrical woes in the final. Fending off strong challenges from Ben-Philip Gundersen and Fraser McConnell, the Swede duly sped to his fifth victory of 2019 to cap another superb season in dominant fashion.

McConnell pulled off some spectacular overtaking moves on his way to second, as SET Promotion’s Sami-Matti Trogen concluded the campaign with consecutive podium finishes in third.

As he had done at Silverstone earlier in the season, Eriksson took a clean sweep of the qualifying races in South Africa, with the Swede’s astonishing consistency truly setting him apart from his pursuers.

JC Raceteknik’s Gundersen was his closest challenger with a characteristically gritty and committed performance, whilst McConnell – the clear fan favourite at Killarney – overcame a five-second penalty for a track marker infringement in Q4 to slot into third, thrilling the crowds with his trademark all-out approach along the way.

The semi-final line-up was completed by 2018 EuroRX TouringCar champion Steve Volders, Anders Michalak and Lane Vacala – meaning the only driver that missed out was Kallio. Still harbouring faint title ambitions entering the weekend, the Finn’s hopes were cruelly quashed on Saturday, when electrical issues kept him out of both Q1 and Q2.

Eriksson had to work hard to fend off a fired-up McConnell in the first semi-final, as the Jamaican came within two tenths-of-a second of deposing the champion from the top spot – forcing his OMSE stablemate to push the limits to remain in front. The pair flashed across the line in a virtual photo-finish, with Östlund preserving his 100 per cent record of reaching the final in RX2 this year a little way back in third. Michalak pulled off a bold round-the-outside pass at Turn One to secure fourth, ahead of Nårsa and Aneklev.

Mirroring Eriksson’s performance, pole-sitter Gundersen led the second semi-final from lights-to-flag, chased home by Gryazin and Trogen. A fast-starting Olofsson initially occupied third spot, but a few wild moments ultimately opened the door for his SET Promotion rival to overhaul him once all the joker laps had played out. Volders and Vacala rounded out the order.

Front row sitters Eriksson and Gundersen both drifted wide through the first corner as they disputed the lead at the start of the final, allowing McConnell to briefly stick his nose up the inside before Eriksson re-asserted himself. Contact between Gundersen and McConnell at Turn Two subsequently dropped the OMSE man to fourth behind Gryazin, prompting the Jamaican’s tactical decision to play his joker early.

As Eriksson made good his escape, further back in the pack, his team-mate was flying, consistently reducing the gap to the race leader until an ‘off’ for second-placed Gundersen heading onto lap four saw the Norwegian rejoin the track alongside Gryazin – who squeezed his way past – and immediately in front of Trogen and McConnell. That stunted the latter’s charge, but the runner-up spoils – matching his result from the Barcelona curtain-raiser – nonetheless marked an excellent way to sign off his maiden campaign in RX2.

Trogen repeated his semi-final performance to snatch third on the very last lap, pipping Gryazin to the bottom step of the rostrum by less than half-a-second, with Östlund coming home fifth and the fading Gundersen sixth – albeit having already done enough to leapfrog Kallio into second place in the end-of-season standings.