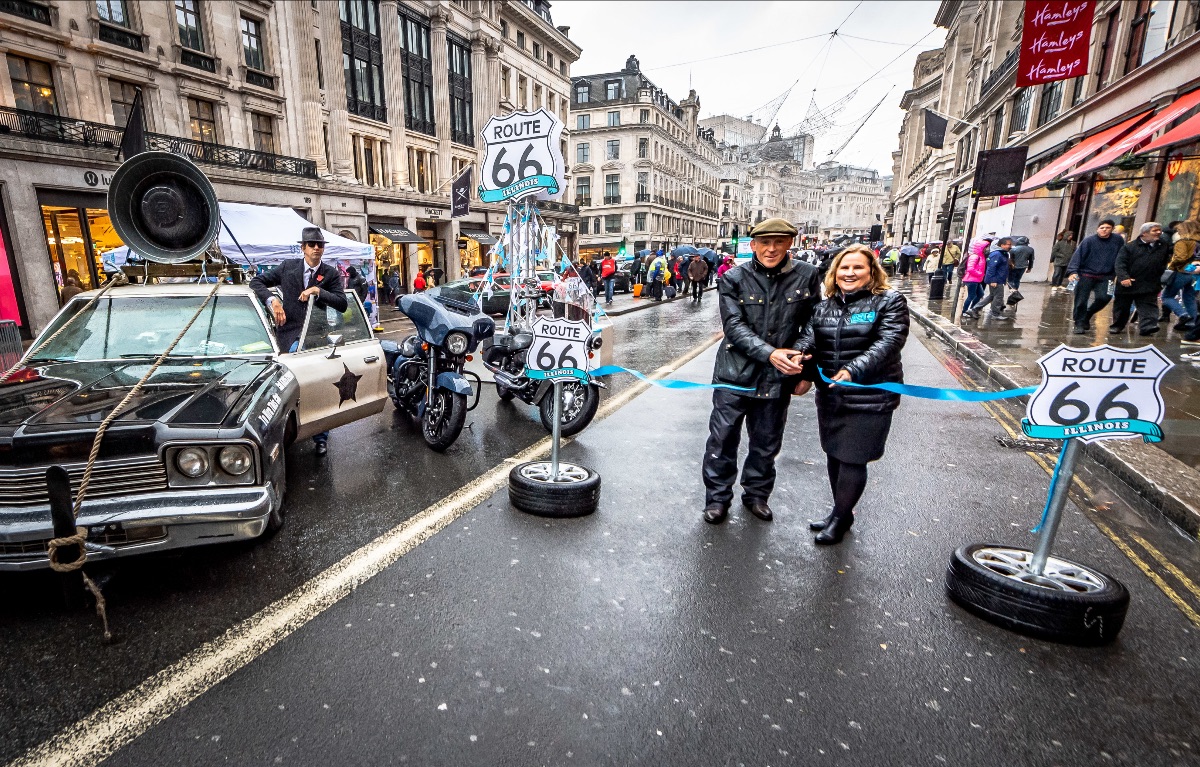 Motoring enthusiasts, shoppers and Londoners savoured a blustery autumnal Saturday to remember on Regent Street (2 November) as the capital’s premier shopping destination was transformed into the country’s biggest free-to-view motor show – an annual event that always attracts close to half a million enthralled visitors.

As tradition now dictates, the famed street was traffic-free between Piccadilly Circus and Oxford Circus and the road filled with a glittering collection of dazzling cars. Victorian vehicles from the very earliest cars right up to the latest electric city cars and exotic supercars were all lining-up for the annual Illinois Route 66 Regent Street Motor Show, a Royal Automobile Club event providing all-comers of all ages with a stunning and timeless showcase.

Illinois Route 66 returned as title partner for the second year in succession and was promoting America’s legendary ‘Mother Road’ which starts in Chicago. Its popular showcase features an eye-catching display of US muscle cars and bikes including Dodge Challengers, a Mustang Bullitt replica, an evocative Chevrolet Bel Air Sport Coupe known as Peggy Sueand an iconic Bluesmobile replica (Dodge Monaco) as well as some stunning Harley-Davidson bikes. There was also charismatic performances from The King B Blues Brothers Band throughout the day, adding to the atmosphere on the Street.

Also sharing the spotlight were more than 100 pioneering vehicles all built before 1905 and dating back to the dawn of motoring. They and their passengers – many in period costume – were taking part in the annual Veteran Car Concours d’Elegance prior to setting off at dawn on Sunday morning for the time-honoured pilgrimage from London to Brighton in the famous Bonhams London to Brighton Veteran Car Run.

Among those judging the evocative veteran machines this year was renowned television gardener and classic car enthusiast Alan Titchmarsh who also hosted the awards ceremony. After much deliberation, the panel of experts awarded the Concours d’Elegance Overall Winner’s trophy to the 1904 Mercedes of Albert Eberhard from Portugal.

This beautifully maintained and superbly presented 6.8-litre, four-cylinder tourer was originally ordered for Emil Jellinek (the early automobile entrepreneur who named the Mercedes company after his daughter) but was then delivered to the American importer in New York City. It is a regular head-turner on the road to Brighton and caught the judges’ eye for its significance and exceptional all-round condition.

Bringing the motoring story right up to date, Go Ultra Low was displaying a wide range of the latest generation electric vehicles in the Motoring Today Zone with the Nissan Leaf, Nissan e-NV200, Jaguar iPace, Jaguar Range Rover, Tesla Model 3 SR, and DS 3 Crossback E-Tense. Not only that, but a number of test drives were also available to those considering a switch to plug-in technology.

Harrods introduced its first EV more than 110 years ago and the legendary department store was one of the first companies to operate an all-electric fleet in the UK and today uses a 100 per cent electric Nissan e-NV200 for local deliveries. Its highly distinctive 1901 Pope Waverley electric vehicle complete with a traditional green and gold livery was among the prize winners in the Concours and four further vehicles from its Heritage Collection were also on show, including an example of an electric van specially commissioned by the company in the 1930s.

For those with a need for speed, other much-admired features on Regent Street included a preview of the biggest classic motor sport event on the calendar – the 30th anniversary Silverstone Classic. Its adrenaline-fuelled stand not only included a huge screen broadcasting highlights from last summer’s record-breaking event, but also a pair of the stand-out F1 cars (a 1960 BRM P48 raced by Graham Hill in period and an ex-Riccardo Patrese Arrows RA1 from 1978) that will be in action next July. Adding to the motor sport spectacle were victorious competition cars from FIA World Rallycross Championship and the ever-popular British Touring Car Championship – the latter topped by Colin Turkington’s Championship title-winning BMW 330i M Sport.

Not only that but embracing the motorsport theme in a dedicated area of its own, another display promoted the eagerly-awaited Le Mans ’66 movie will be featured; a film which brings to life for the big screen the Le Mans battle between Ford and Ferrari back in 1966.

The hugely popular Illinois Route 66 Regent Street Motor Show also offered a treasure trove of engaging activities and attractions for younger visitors. The Kids Zone – so successfully introduced last year – returned with the very photogenic 1930s red fire engine and TrackStars electric karts. Those of all ages could also discover what it’s like to race around the Barcelona Grand Prix circuit with five-time world champion Lewis Hamilton in a Mercedes F1 racer courtesy of the Top Gear Experience simulator.

It wasn’t just cars, either. Musical interludes came from the talented West End Kids who performed throughout the day… and, of course, there was ample opportunity to drop into the flagship stores on Regent Street to do some pre-Christmas shopping.

The Regent Street Motor Show, which was first staged in 2005, regularly attracts a huge attendance and, despite the blustery autumnal conditions, this year’s packed event was as popular as ever.

“Once again, Regent Street featured something for everyone and acted as the perfect prelude to tomorrow’s remarkable Bonhams Veteran Car Run from London to Brighton,” enthused Cussons. “The tremendous spirit on the Street – notably among the hardy brigade of veteran car owners – ensured the showers did absolutely nothing to dampen spirits.

“This annual event continues to go from strength-to-strength, attracting huge attendances and marking one of the highlights of the Club’s London Motor Week – a seven-day celebration full of motoring events staged by the Royal Automobile Club, which culminates as hundreds of these wonderful veteran cars reach the Sussex coast on Sunday afternoon.”

Speaking on behalf of event title partner – Illinois Route 66 – Kemmerling added: “We were delighted to return for the second year as the title partner to such a prestigious, driving-themed event set right in the heart of London. Once again we have had the chance to meet with so many enthusiastic visitors and talk with them about the incredible travel experiences available along the Illinois section of the legendary Route 66. From the famous Route 66 Begin sign in Chicago to the Route 66 Hall of Fame and Museum in Pontiac and the Original Historic Brick Road in Springfield, we look forward to welcoming new visitors to our state.”