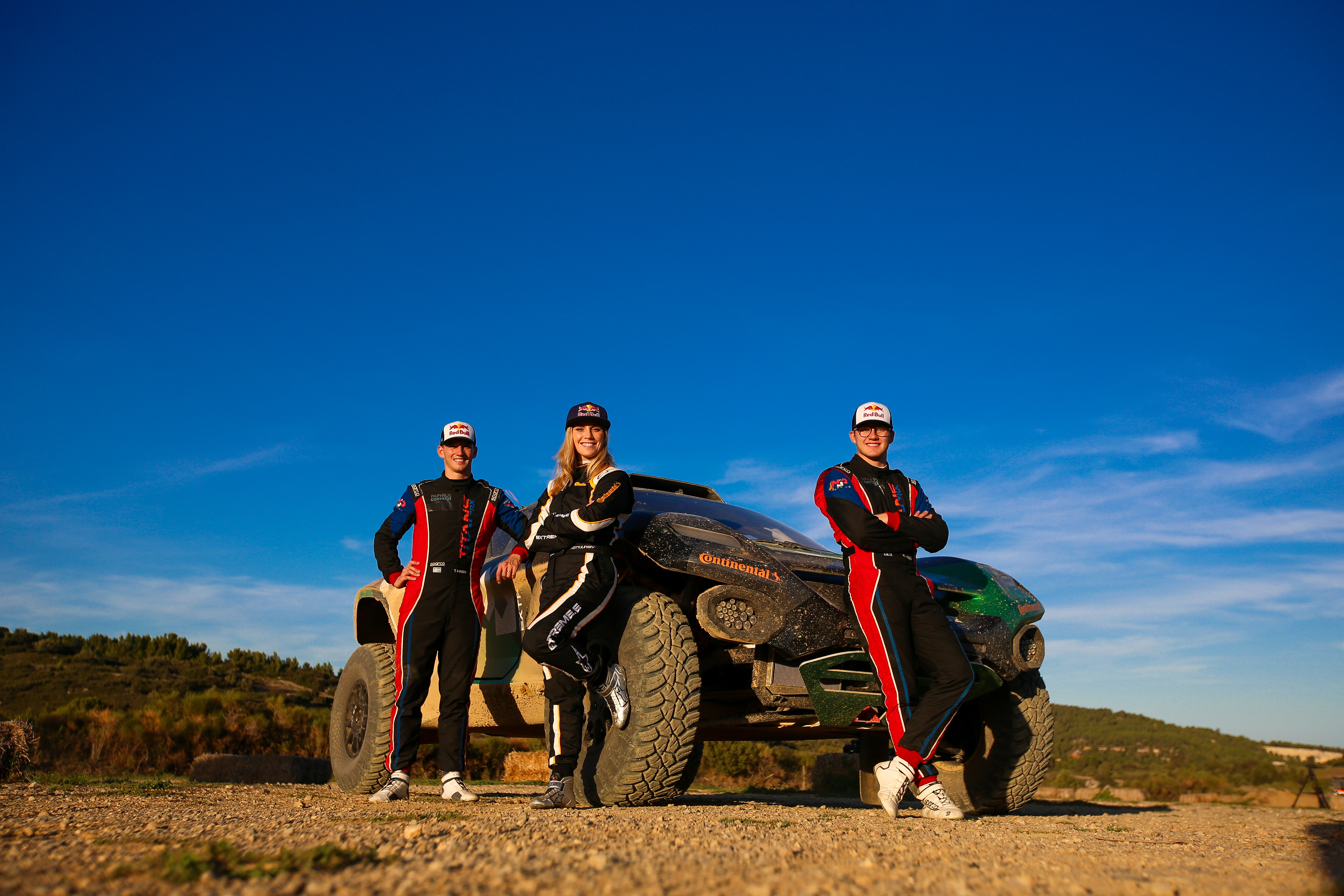 The pioneering Spark Racing Technology-designed and built E-SUV completed its first day’s running in France at the Chateau de Lastours testing venue near Carcassonne in the south of France – used by a number of World Rally Championship and Dakar outfits as a proving ground.

The four-day test is being run in conjunction with the championship’s Official Tyre Partner and Founding Partner Continental Tyres, as the company develops its unique, bespoke high-performance tyres constructed specifically to tackle everything Extreme E’s five formidable environments can throw their way.

Current World RX standings leader Timmy Hansen was the first to drive ODYSSEY 21 off-road and was impressed with the radical car’s characteristics and performance.

“As early as lap two I was able to push,” said the Swede. “The car felt nimble, agile and responsive – it definitely didn’t feel its size. It drifted as you’d want a four-wheel drive car to do then it pulls and recovers nicely when you apply the throttle. I already feel comfortable in the driver’s seat.

On his first experience driving an electric vehicle, Timmy adds: “It has incredibly good driveability compared to a rallycross car. The throttle responds instantly. You get the exact response you want, which you can’t get from a combustion engine with anti-lag devices and the like. It’s instant power when you need it and nothing when you don’t. You can control everything through the pedals.

“Everything was as I hoped – you don’t expect that at such an early point in testing. It feels like a car I could spend all day in, so let’s go!”

His brother Kevin, with whom Timmy is in direct competition for this year’s World RX crown, also got a first taster of an electric race car, taking the ODYSSEY 21 up into the mountains surrounding the chateau.

“Being in the car, going through beautiful scenery and feeling so at home in the driver’s seat is a moment I’ll never forget, for sure,” said Kevin. “I want to continue to race this car.

“It’s a great piece of engineering and the people involved are fantastic – working so hard on the organisational, media and, of course, the technical side with the car. Just getting to drive it at this stage is a big advantage and I think I’m capable of doing well in the series. I will be trying very, very hard to be on the grid.

“I didn’t know what to expect in the beginning. I’d only ever seen a Dakar car, similar in stature to this, on TV. I thought it’d be different from everything I’d ever driven.

“As soon as I got in the car it felt complete. I could push as I liked and I felt right at home. It was a great first impression. I was nervous about the difference in driving an electric-powered vehicle as this was my first outing in one but I was surprised at how similar it really is. You get the sound of the transmission going up and down in speed and it makes a lot of sense. It was encouraging to see that I could perform here too.

“Up in the mountains was my first taste of the car in its own environment. There’s some improvement to be made as you’d expect during a first test. We looked at the dampers in the afternoon to try and understand which direction to go in but it was a truly amazing experience to be out on stage not knowing what’s going to happen.”

Continental’s Test Driver for Extreme E, Mikaela Åhlin-Kottulinsky, has a key part to play in the process; testing to ensure the company’s bespoke tyres perform across all conditions encountered across Extreme E Season 1.

“I’m super excited – this is the first big testing step for us,” she said. “The launch was the first marker with the tyres on the car for the first run to see how everything worked together and looked.

“We can finally test the tyres to their maximum on a rough, off-road surface and it’s a great opportunity to see how much we can push them, where the limit is and how much we can improve them. They will have to take big impacts, and work across multiple surfaces and in different environments.

“When we started with this project we had nothing to go on but the locations we’d race in. We had to really use our imagination and experience to come up with designs and a solution that could perform against all the challenges that could be thrown its way.

“We’ll use our expertise to develop a brand new tyre to cope with all the different surfaces. The tyre is the link between the car and the ground. Without a good tyre, it doesn’t matter what you’re doing with the car setup-wise. They have to perform in tough conditions across every event.”

Each vehicle comprises a common package of standardised parts, including a powertrain manufactured by Spark Racing Technology with a battery produced by Williams Advanced Engineering. The chassis encompasses a niobium-reinforced steel alloy tubular frame, as well as crash structure and roll cage, whilst tyres to suit the extreme conditions will be supplied by Continental Tyres

Teams, should they wish, will be able to select areas of bodywork, such as the engine cover, front and rear bumpers, side skirt, and lights in a bid to replicate the look of everyday car models.

The car’s only previous outings have been engineering shakedowns following its public unveiling at the Goodwood Festival of Speed in prototype form. Since then, Spark has outfitted the E-SUV with its final drive configuration, running at three-quarters of its final performance.

Théophile Gouzin, Technical Director of Spark Racing Technology which designed the car, said: “The plan is to cover as much ground as we can this week with Continental Tyres. We’re using the track here, where WRC and Dakar cars have tested, to test the performance and comfort of the car.

“We’re entering the unknown this week. We’ll go step-by-step slowly increasing power and speed as we go. You think the limit is far but you try to reach it slowly and with confidence.

“At Goodwood, we only ran in a two-wheel drive configuration with Formula E motors. Now we have four-wheel drive and two motors – one front and one rear – with five or six times the torque.

“We have a 0-100kph of around five seconds at the moment. We’re not far from the final outputs where each motor will have around 450n/m of torque apiece – we’re at 320n/m at the moment. This is our first week.

“We will check the car and rebuild as well as upgrade parts as needed while Formula E tests in Valencia next week. After that, we’re back on track and the goal is to cover as much mileage as we can between now and the first event.”

Development of the ODYSSEY 21 prototype will continue apace ahead of delivery of 12 cars from Spark Racing Technology to teams in Summer 2020. Group testing is planned to take place in Autumn next year before competitors board Extreme E’s unique floating garage, the RMS St. Helena, ahead of the opening race in February 2021.