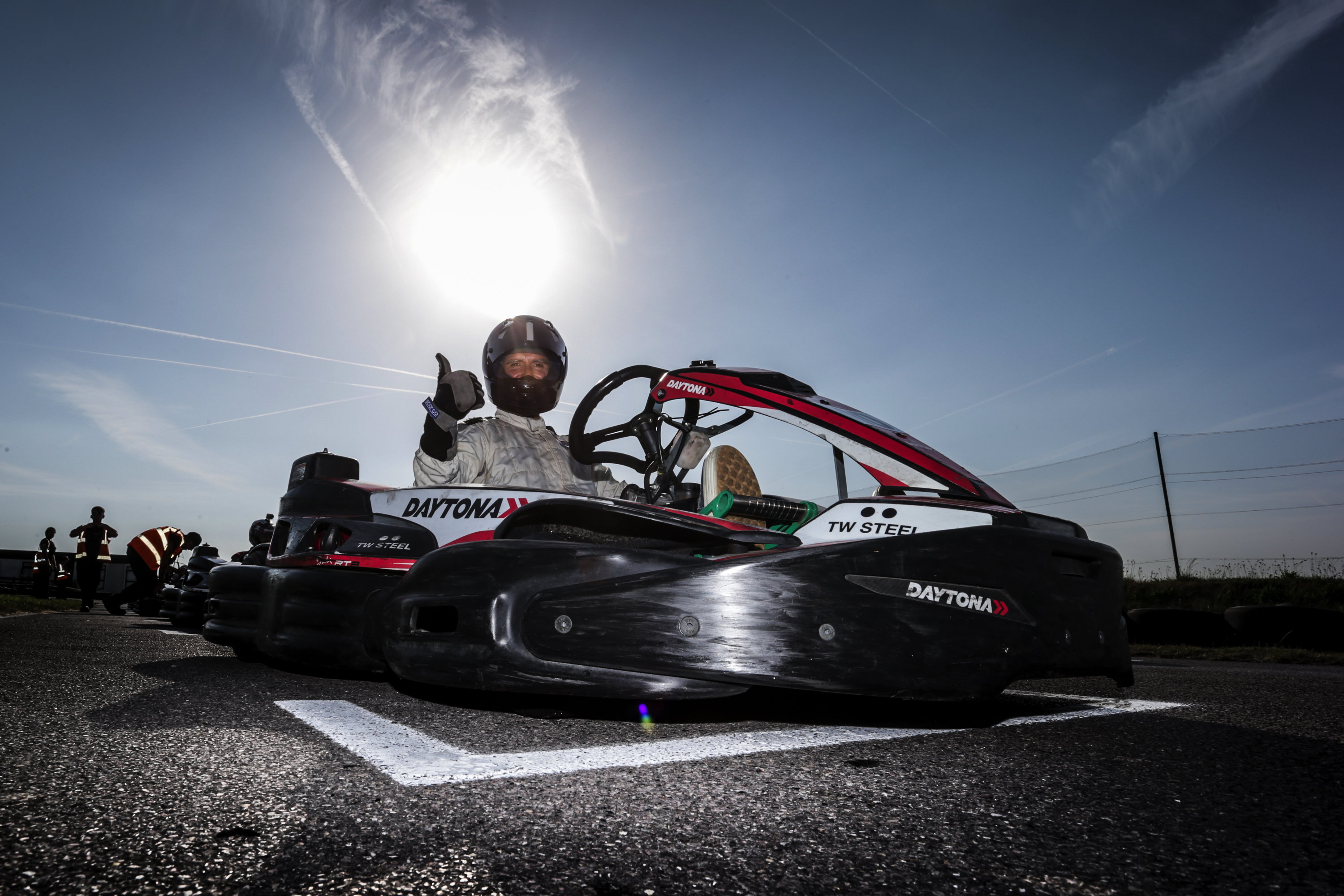 The racing was fast-and-furious from the outset, with no quarter asked and none given as participants scrapped for supremacy around the impressive 900m outdoor GP Circuit behind the wheel of Daytona Motorsport’s super-fast Sodi RT8 pro-karts. The top four grid slots were sold to the highest bidders, whilst tactics were also part of the game, with competitors able to play joker cards to ‘buy’ an extra lap – or take one away from a rival team. Le Mans-style driver changes added to the challenge and spectacle.

At the end of the evening, a variety of memorabilia went under the hammer, including a special hillclimb alongside Hill at this summer’s Goodwood Festival of Speed, a framed McLaren T-shirt signed by F1 stars Fernando Alonso and Stoffel Vandoorne, an Aston Martin Gulf race suit previously owned and worn by multiple Le Mans 24 Hours class-winner Darren Turner, a privileged behind-the-scenes tour of the McLaren Technology Centre, Dunlop MSA British Touring Car Championship entry tickets with VIP hospitality and an exclusive Daytona Motorsport corporate karting event.

“Daytona Motorsport did a fabulous job for us once again,” remarked Sky Sports F1 pundit Hill, co-founder and patron of Guildford-based charity halow, which is dedicated to supporting and creating opportunities for young people aged between 16-35 with learning disabilities. “It was a great turnout with a lot of excited teams playing their part, and I’m always stunned by people’ s generosity.

“Everybody that entered did so in the right spirit. We get involved in a lot of fundraisers, and this is the perfect example of what we are trying to do with halow – create activities that bring people together and encourage socialising, which are the things that really help people with learning disabilities to maintain their enthusiasm. We don’t get any money from anywhere else, so we have to raise it all ourselves which makes this kind of event crucial. It was a fantastic day.”

“We are absolutely delighted to have played a role in raising so much money for such a worthy cause,” enthused Daytona Motorsport Director, Jim Graham. “The work that the halow project does to help young people is truly inspirational, and it was our absolute pleasure to host the Damon Hill Karting Challenge for the sixth consecutive year. The sun shone brightly and everybody seemed to have a wonderful time both on and off the track, which is what it’s all about – truly putting the ‘fun’ into fundraising. We’re already excited about next year’s event!”

Daytona Sandown Park is the ideal venue to host an event of this magnitude. Easily able to accommodate three to 300 participants in a variety of racing formats, this facility is the perfect choice for corporate, leisure or high-level professional kart racing. Nestled within Sandown Park’s famous horse racing track in Esher, Daytona Sandown Park is widely hailed as one of the best kart venues in the South East and the only one of its kind within the M25. This amazing facility has been offering outdoor professional karting for five-year-olds and upwards for over two decades and is still growing in popularity (www.daytona.co.uk).