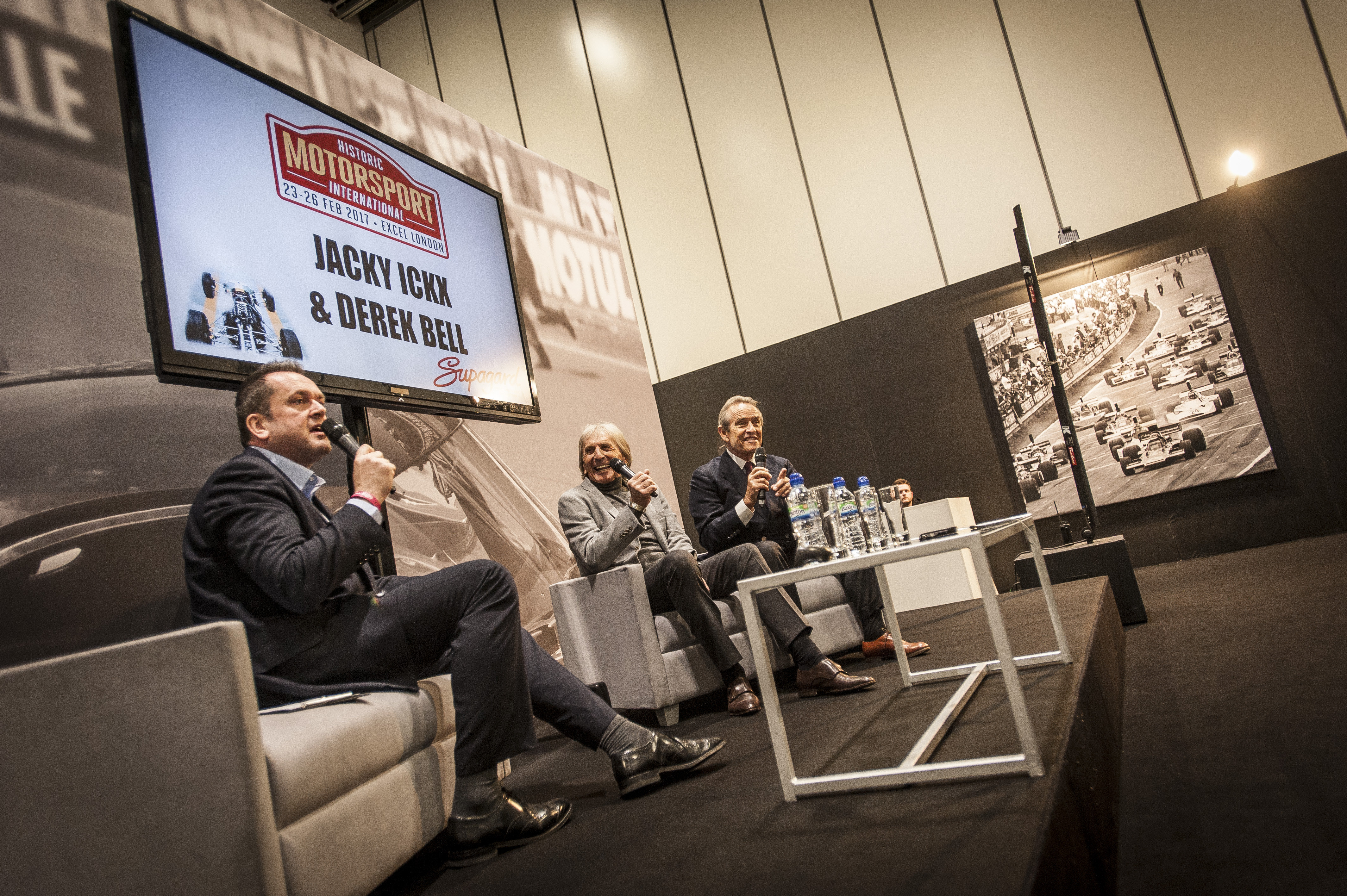 The inaugural Historic Motorsport International has been hailed as a resounding success, establishing the new London show as the must-attend launch-pad to the eagerly-anticipated historic competition season ahead.

Staged alongside the hugely popular London Classic Car Show for four packed days (23-26 February) at ExCeL, HMI underlined the UK’s position at the epicentre of the world’s thriving historic motor racing and rallying scene to more than 37,000 excited and enthralled visitors.

Appropriately the new show was opened on Thursday by motorsport legend Jacky Ickx, the 72-year-old Belgian ace who many regard as the best-ever all-round competition driver. In a remarkable career spanning four decades starting in the early sixties, Ickx won the 24 Hours of Le Mans six times, achieved eight wins and 25 podium finishes in Formula One, won the Can-Am Championship, took two World Sportscar Championship titles and victory in the Paris-Dakar Rally.

As well as performing his official duties, Ickx shared his memories with visitors during two fascinating public interviews in HMI’s busy Supagard Theatre on Thursday afternoon and Friday morning when he was joined by Derek Bell, the Englishman with whom he shared three of his Le Mans wins.

The Supagard Theatre also hosted entertaining interviews with a number of other famous faces from motorsport including renowned racers Emanuele Pirro, Steve Soper, Martin Donnelly and Jackie Oliver and was home to the two-day HMI 2017 Conference Programme – with leading names from the sport discussing important topics such as safety, driving standards and eligibility.

The tens of thousands of HMI visitors were also treated to a unique insight into all areas of historic motorsport. Exhibitors included the organisers of all of Europe’s premier series’ and championships as well as iconic race car constructors such as Lister and Crosslé.

Other notable displays came from historic preparation specialist Hall & Hall and Cosworth, the latter celebrating 50 years of its remarkable DFV F1 engine featuring one of the original 1967 Lotus 49s which gave the DFV the first of unrivalled tally of 155 grand prix wins. Positioned close to the main HMI entrance it was a major head-turner as was the 1988 Le Mans winning Jaguar XJR9 on show in the Supagard Theatre.

The world’s biggest classic motor racing festival – the annual Silverstone Classic – also had a major presence at HMI not only showcasing some of the stand-out cars that will be competing come July but also bringing its famous Scarf & Googles pub to London for the very first time.

Adding to the already buzzing atmosphere, HMI boasted a live sale by specialist auctioneers Coys on Saturday afternoon with an appealing collection of 22 competition and classic road cars coming under the hammer and generating more than £1 million worth of sales.

“It was exciting to part of the very first HMI – a show that clearly is going to be a major player in the historic motorsport sector,” said Chris Routledge, CEO of Coys. “There were some amazing cars on show – and not just with us here at Coys. We are very much looking forward to next year.”

The confirmed dates for next year’s Historic Motorsport International are set for 15-18 February when HMI, once again, will run alongside The London Classic Car Show at ExCeL London.

“Many of those participating have already reconfirmed for 2018 when HMI will not only be bigger but will also be a week earlier thus providing all those involved with an even better opening to the competitive season ahead.”