By Emma Illman19th May 2021Uncategorised 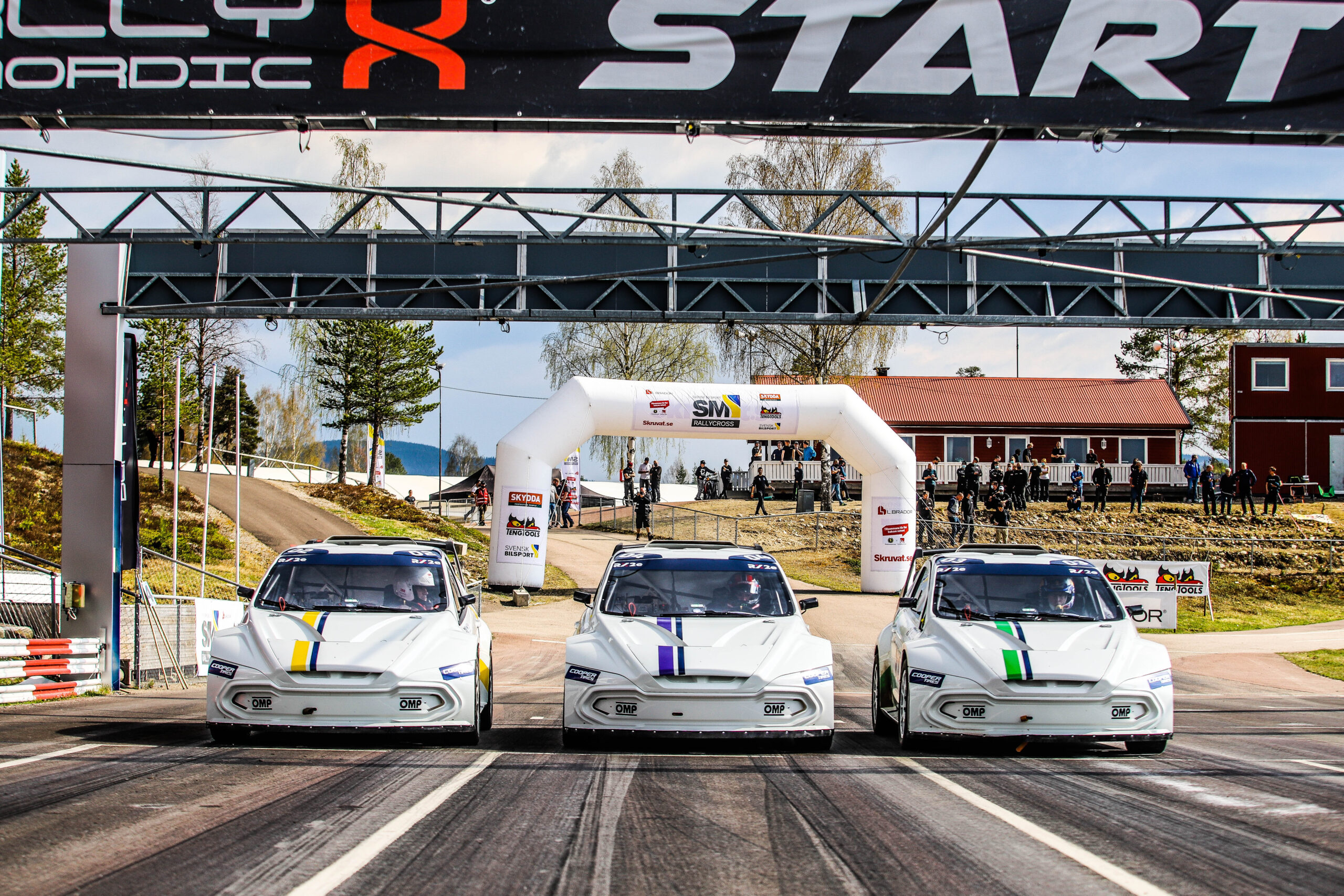 The FIA RX2e Championship car earned praise from some of the world’s best drivers during the innovative Superteam Challenge at Höljes last weekend, with a stellar line-up of rallycross elite getting behind the wheel of the innovative machine for the very first time.

The demonstration competition saw nine of the best off-road talents team up to race three of the cars that will be used in the first-ever FIA electric rallycross championship next year.

Johan Kristoffersson, Timmy Hansen and Sebastian Eriksson emerged as the victorious team after six frenetic heats, getting the better of Andreas Bakkerud, Kevin Eriksson and Anton Marklund in one car and Kevin Hansen, Oliver Eriksson and two-time World Rally Champion Marcus Grönholm in the other.

The Superteam Challenge, which was slotted into the RallyX Nordic Round 3 and Round 4 schedules at Höljes, proved a huge hit in the paddock as the RX2e cars were pushed to the limit in a racing situation for the first time.

The innovative event also provided extra entertainment with drivers acting as spotters for their illustrious team-mates as they got to grips with the pioneering technology.

The RX2e cars, which generate 250kW (335bhp) of power and up to 510Nm torque, subsequently underwent a rigorous testing programme on Monday with Pepe Arque and Pablo Suárez sharing the driving duties with Supercar Lites competitors Nils Andersson and Linus Östlund.

FIA World Rallycross Championship frontrunner Andreas Bakkerud, who made history at Höljes by reaching a RallyX Nordic Supercar final in an electric car for the first time ever, is excited about the direction rallycross is heading and was positive about his first run in the RX2e machinery.

Andreas Bakkerud said: “It was difficult jumping from one electric car to another, but each car is always uniquely different. Electric racing is just beginning so we need research and development, just the same as we have done with fossil fuel cars for many years. It takes time to perfect everything.

“I’ve won two heats in an electric Supercar this weekend, and it is very competitive. Unfortunately I lost to Timmy [Hansen] and Marcus [Grönholm] in my first RX2e demonstration race, but it was very cool being on the radio with Kevin Eriksson. I’ve known him for many years and I was singing down the radio at him! We’ve had a bit of a laugh on this event.

“As a racing driver you have to always be open whenever you have an opportunity to race or test something new. If you get a possibility, you can only become a better driver by saying yes. I’m open for anything.”

Sebastian Eriksson: “The RX2e car is really fun. I had the opportunity to test a prototype a little bit last year, and it is a good car to drive. It is also easy to drive, and easy to get used to.

“You can drive it more aggressively than an RX2 car. It has full power all the time, so it is easier to save a mistake with all the torque. It’s quite forgiving so you can really push the limits.”

Kevin Hansen: “Electric is the future of rallycross and these cars are amazing. For sure, it is a new challenge and you can do a lot of different things with the set-up, even though we are all driving the same car.

“This is the future. I feel really happy that the car is finally here and we can try it out. The action in these races has been brilliant, so for everyone saying that electric racing will be boring… they are so wrong.”

“In particular, it has been encouraging to hear how such a high-calibre field of drivers has been impressed with the outright performance of the RX2e car. The future of rallycross is electric, and this event was the latest step on that path.”