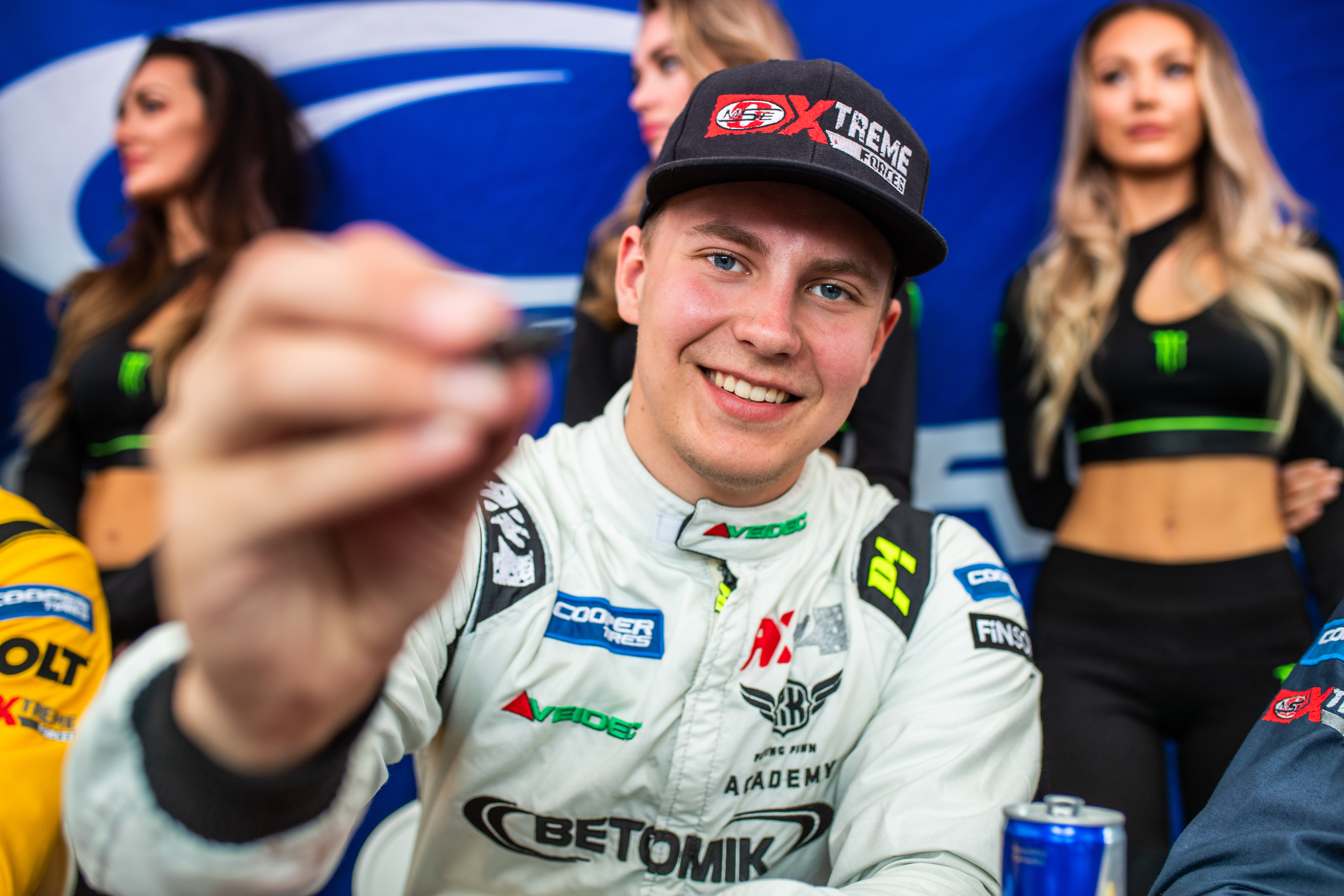 Jesse Kallio – one of the undisputed revelations of the 2019 RX2 International Series presented by Cooper Tires – will return for a second season in the official FIA World Rallycross Championship feeder series this year with title glory firmly on his agenda.

Fresh off the back of a race-winning campaign in FIA Euro RX’s Super1600 class, Kallio shot out-of-the-blocks in RX2 last year, racing to five consecutive podium finishes with Olsbergs MSE and very nearly winning round three at Spa-Francorchamps, with only a slightly hesitant start in the final denying the Finn victory.

Kallio looked set to finish second in the standings behind OMSE team-mate Oliver Eriksson, until cruel misfortune in the South African season finale – in the shape of electrical issues that ruled him out of two of the four qualifying races – dropped him to third. As he looks back, however, he does so with justifiable pride in his achievements.

“My rookie season in RX2 was amazing,” he affirmed. “The series, car and team were all completely new to me and it was my first time running with four wheel-drive – and I finished on the podium first time out! That was incredible, particularly given how competitive the series is and how many fast drivers there were in the field with much more experience than me in Supercar Lites machinery – it was really rewarding to be able to take the fight to them.

“By the time we got to Spa, I was challenging for victory, which was way more than I had been hoping for. I hadn’t expected to be pushing for the podium until later in the season, but we were up there right from the start.

“It was obviously a difficult end to the year. We were well on-course to clinch second in the championship, but that was taken away from us through no fault of our own. That gives me a lot of motivation for the new season, and I’m feeling really fired-up and hungrier than ever to come out fighting for victory.”

Kallio will unquestionably head into the forthcoming campaign as one of the title favourites, and he hopes his prior experience of competing at Montalegre – a track that will be new to many of his rivals – allied to his ‘dry run’ at Höljes during the RallyX Nordic curtain-raiser in May and his ongoing partnership with OMSE will pay dividends in what he predicts to be a fiercely competitive season.

“The calibre of the competition looks set to be exceptionally high again – perhaps even more so than last year – and that means consistency will be key in the championship battle,” the 20-year-old asserted. “The continuity with OMSE is definitely an advantage in that respect. They have so much experience in the sport, and we established a very strong relationship last year so I’m really excited to work with all the guys again.

“Montalegre is a tricky circuit to get to grips with, so it’s good to have some prior knowledge of it – that will hopefully play in my favour – and I’m looking forward to going to the Nürburgring, too. We don’t yet know what the rallycross track will look like, but it’s always fun to discover new venues – especially one with so much history behind it.

“In a single-spec series like RX2, the racing is always extremely close but my goal for this year is clearly to win the title – and I’m confident that with OMSE, I have everything I need to mount a very solid challenge.”