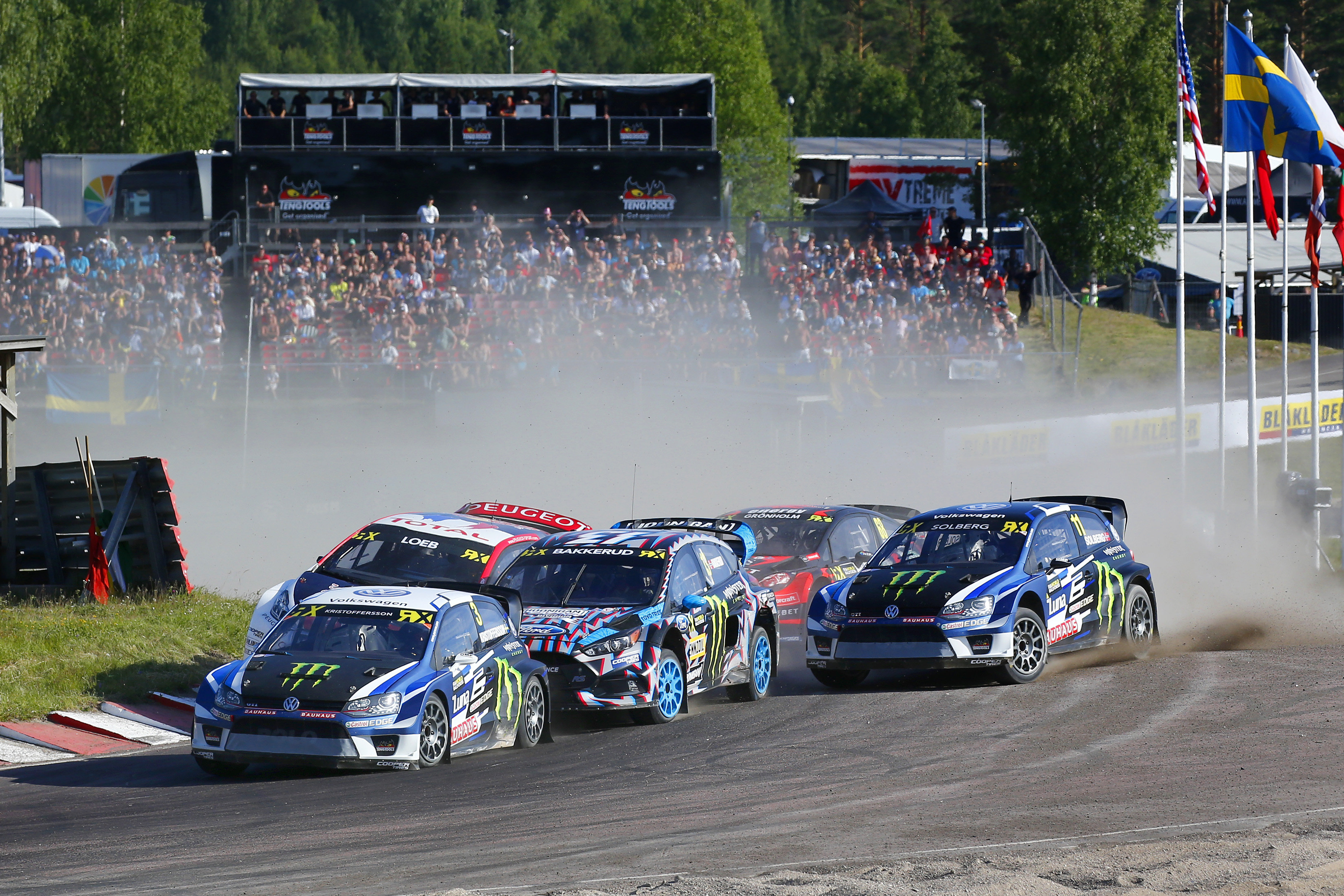 Defending champion Johan Kristoffersson arrives on home soil at the top of the standings following four victories from the opening five events – including a commanding performance in Hell, Norway last time out – but his rivals are determined to turn the tables on last year’s Holjes winner.

Second-placed Sebastien Loeb will be fired-up to fight back in Sweden after missing out on the final for the first time this season in Norway. The Frenchman was a podium visitor at each of the opening four rounds this year, and in both of his previous starts at Holjes. His campaign, and that of team-mate Timmy Hansen should be helped by the introduction of new Peugeot 208 WRXs which are due for this event, Team Peugeot Total promising both chassis and engine upgrades.

Norwegians Petter Solberg (PSRX Volkswagen Sweden) and Andreas Bakkerud (EKS Audi Sport) are hot on Loeb’s heels, with the trio separated by just three points as they pursue Kristoffersson for the championship lead. Solberg, surprisingly, has only once reached the podium in Sweden and is eager to break his 2018 duck after all too often seeing his scintillating speed go unrewarded this year. Bakkerud, by contrast, has never finished lower than third in four appearances – taking a famous win two years ago.

The transformation that takes place at Holjes for the World RX event is quite remarkable, as a tiny village in the heart of the Varmland forest – counting a population of less than 200 – welcomes more than 45,000 enthusiastic fans for a feast of high-octane rallycross action. Once again, the event marks the midway point of the World RX season, with the championship then taking a five-week break before resuming for its second half at Trois-Rivieres in Canada.

The significance of heading into the summer riding a wave of positive momentum cannot be underestimated, and home heroes Mattias Ekstrom (EKS Audi Sport) and Hansen (Team Peugeot Total) are determined to put on a show as they strive to close the gap to the top of the leaderboard. Ekstrom won at Holjes in both 2014 and 2015, while Hansen is twice a podium finisher at the track.

Amongst the 17 Supercar entries will be six Swedes, with Hansen’s brother Kevin (Team Peugeot Total) and Olsbergs MSE pairing Robin Larsson and Kevin Eriksson completing the sextet. The younger Hansen is edging ever-closer to the podium, and following a breakthrough weekend in Hell – getting both cars into the semi-finals for the first time in 2018 – OMSE will arrive on home turf with the top six in its sights.

In addition to the permanent competitors, two-time DTM champion Timo Scheider returns to the fray, having last competed in World RX – and reached the final – in South Africa back in November. The German will pilot the ALL-INKL.COM Munnich Motorsport Seat Ibiza he drove in selected outings in 2016.

Johan Kristoffersson, PSRX Volkswagen Sweden, said: “Winning at home was one of the most special results of my career at Holjes last year, and all I can do is try to repeat that this weekend. Competing in front of so many thousands of fans is unbelievable – when you see the flags everywhere, the atmosphere is just through the roof. I love it. Petter [Solberg] and I both think there is a bit more to come from the car still, so this is exciting, and I think we will need it – for sure the competition is getting closer.”

World RX Managing Director for IMG, Paul Bellamy commented: “Holjes is one of the most popular events on the World RX calendar, and for good reason. The ‘Magic Weekend’ is a spectacular fusion of awesome on-track entertainment and off-track atmosphere, with the fans’ passion and enthusiasm for the sport truly a sight to behold. With Sweden’s Johan Kristoffersson leading the championship, the spectator banks are sure to be a sea of yellow-and-blue and if recent rounds are anything to go by, the action will be non-stop. With the forecast for wall-to-wall sunshine and the racing in World RX hotter than ever, we look forward to another ‘Magic Weekend’ at Holjes.”

From a Cooper Tires point of view
Paul Coates, General Manager – Motorsport, Cooper Tire Europe, said: “With a sixth-gear straight, quick changes from gravel to asphalt and the jumps, this is one of the most exciting and demanding tracks of the season. This means the Cooper rallycross tyres have to withstand a lot of extreme forces but with the use of advanced materials and a specific construction, the tyre can not only take the force of landing a jump but quickly takes the sudden braking and cornering forces as well.”

European Rallycross Championship – Supercar
A capacity 30 drivers are signed up for the third round of the FIA European Rallycross Championship for Supercars, with early-season pace-setters Reinis Nitiss and Anton Marklund locked in battle, separated by just three points following a victory apiece to-date. Both have previously finished inside the top four at Holjes at World RX level, so their rivalry can be expected to intensify this weekend as they duel it out for honours. Denmark’s Ulrik Linnemann is third in the championship, with Holjes favourite Peter Hedstrom, from nearby Torsby, currently fourth.

RX2 International Series presented by Cooper Tires
As in World RX, there is a Swede at the summit of the standings in the RX2 International Series presented by Cooper Tires, with Oliver Eriksson leading the way approaching the mid-point of the campaign following success at Silverstone and a close second place in Hell. The OMSE ace – younger brother of World RX star Kevin Eriksson – is pursued by Sondre Evjen, Vasiliy Gryazin and Guillaume De Ridder, who won last time out and ascended the podium for the first time at Holjes in 2017. A record-breaking 30 cars will take to the grid this weekend.

European Rallycross Championship – TouringCar
Following a theme, a full grid of 20 cars will contest the third and final round of the FIA European Rallycross Championship for TouringCar. Steve Volders’ commendable consistency has propelled him to the top of the title table arriving at Holjes. Jan-Emil Wilsberg and Daniel Lundh are tied for second, just five points in arrears, with the evenly-matched pair having each reached the rostrum once. Daniel Holten’s victory in Hell catapulted the Norwegian up the rankings to fourth. Round one winner Fredrik Salsten remains in contention as the first title of the year is decided. This will be the last event for TouringCar as a European Championship, the FIA having decided to discontinue the category.

Information
Further information about Swecon World RX of Sweden can be found at the following link:
www.fiaworldrallycross.com/event/101/holjes-motorstadion

Standings
Full Championship standings can be found at the following link:
www.fiaworldrallycross.com/standings