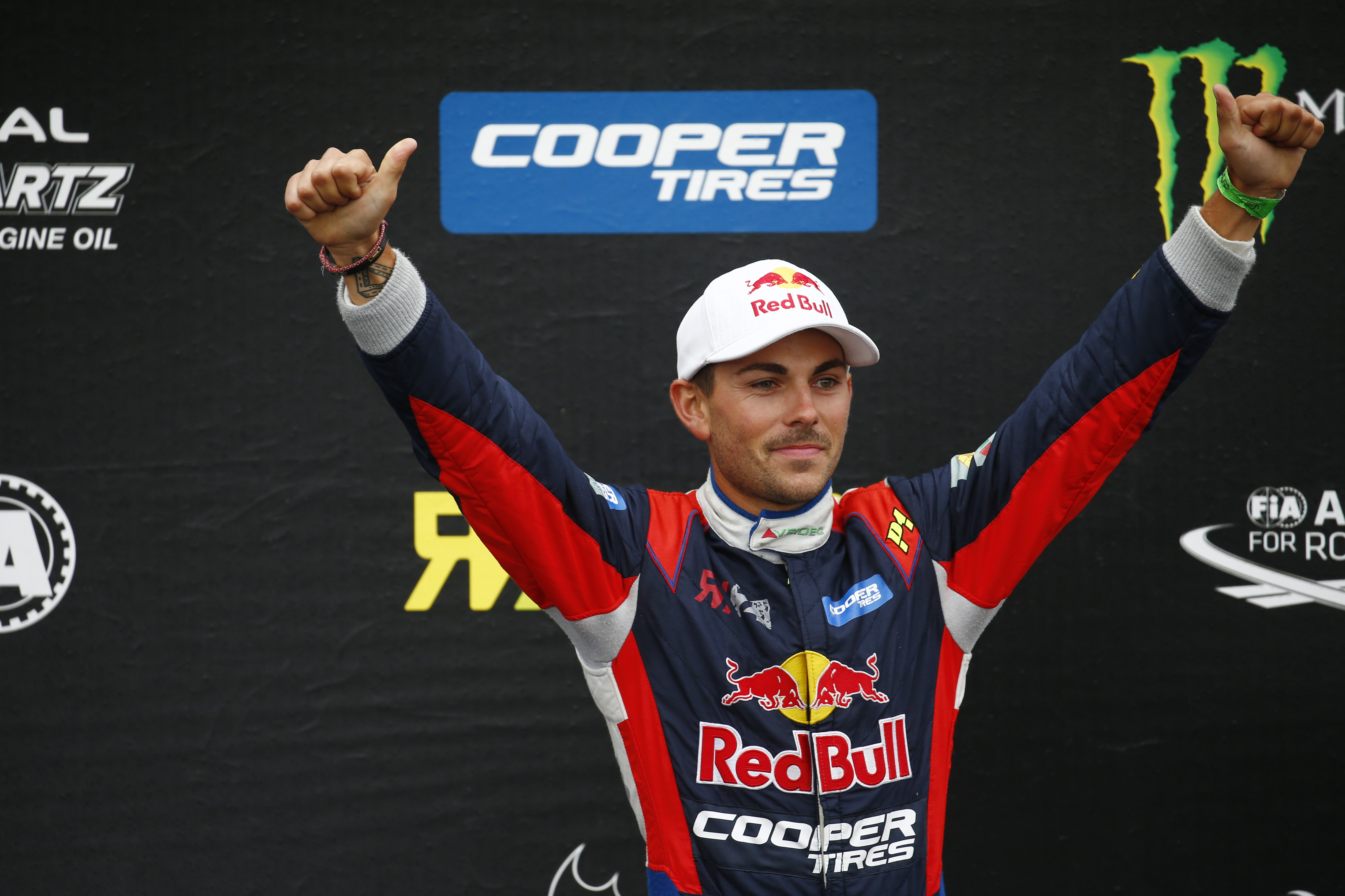 Cyril Raymond is the inaugural RX2 International Series presented by Cooper Tires Champion, after thrilling the partisan fans with a flawless performance at Lohéac in France this weekend (2/3 September) to clinch the coveted crown on home soil.

Raymond has led the way in the official FIA World Rallycross Championship feeder series all season, engaging in a fierce duel with reigning MSA British Rallycross Champion Dan Rooke, but the Englishman’s hopes of lifting the laurels were extinguished over the course of a difficult weekend that saw him fail to make the final for the first time in RX2.

That meant that should Raymond win the final, he would also win the title, and the Olsbergs MSE ace duly delivered with a virtuoso drive under pressure and in treacherous conditions, withstanding the challenge of a charging Guillaume De Ridder, who continues to go from strength-to-strength in his maiden campaign of rallycross competition. Vasiliy Gryazin rounded out the rostrum in third for his best finish of 2017 to-date.

In front of a capacity crowd of some 75,000 enthusiastic spectators, Raymond completed a clean sweep of all four Qualifying Races at Lohéac, but the Frenchman was made to work hard for it, particularly by De Ridder, who is increasingly earning his rallycross stripes after switching disciplines from rallying this year.

Another former rally pro rapidly adapting to his new environment is Gryazin, who placed third in the Intermediate Rankings – building upon the success of reaching the final for the first time four weeks ago in Canada – with De Ridder’s JC Raceteknik team-mate William Nilsson overcoming a brace of time penalties to grab fourth overall.

Simon Olofsson and Thomas Holmen were consistent threats in fifth and sixth respectively, with Rooke only seventh after crashing in practice and colliding with Sondre Evjen in Q3. Norway’s Glenn Haug wound up eighth ahead of countryman Evjen, with Andreas Bäckman, Simon Syversen and Anders Michalak completing the semi-final contenders.

If the sun shone brightly on Saturday, Sunday greeted the RX2 competitors with distinctly different conditions and very limited grip, as the heavens opened with a vengeance over north-western France. Raymond got the jump at lights-out to take the lead from Gryazin and Olofsson in the first of the semi-finals, with the latter muscling a fast-starting Rooke wide through Turn One.

The top two would remain untroubled right the way to the chequered flag, but a series of ‘offs’ for Rooke – culminating in a puncture – dropped the Briton down the field and dashed his chances of progressing through to the final. Olofsson looked like making the cut, until a late mechanical failure forced him out and promoted Syversen into the last six for the first time all season.

In the second semi-final, pole-sitter De Ridder initially lost out to Nilsson, but the Swedish teenager would come unstuck at the end of the opening lap as a half-spin resulted in contact with both Haug and Bäckman. Nilsson was out on the spot, with his fellow Scandinavians significantly delayed. De Ridder swept through into the lead, with Holmen following into second and Michalak third to complete the final protagonists.

Raymond made a textbook getaway at the lights to lead De Ridder away from the line, with Gryazin squeezing a fast-starting Holmen to retain third as Syversen took advantage to sneak past his young compatriot into fourth. De Ridder maintained the pressure on Raymond as the leading trio sped clear, but an early joker lap for the Belgian failed to pay off.

Raymond waited until the last lap before playing his own joker, and as he emerged just ahead of De Ridder, the crowd erupted, with only two corners now separating the Frenchman from the inaugural RX2 Series trophy.

As he has been season-long, the 24-year-old was inch-perfect as he staved the impressive De Ridder off to the chequered flag, with Gryazin reaching the rostrum for the first time in third to become the seventh different podium-finisher of 2017. Syversen and Michalak came home fourth and fifth, with Holmen finding himself out-of-luck in his first final appearance since Lydden Hill as a puncture scuppered his charge.

In the midst of Raymond’s post-race celebrations with his family, friends and team, the newly-crowned champion was approached by Rooke, as the Englishman came over to congratulate his arch-rival in a display of mutual respect and admiration. It was a scene that neatly encapsulated the enthralling 2017 campaign in a nutshell.

The RX2 season finale will take place at Killarney International Raceway close to Cape Town in South Africa on 9-11 November.

Cyril Raymond (1st): “What a magical feeling – there’s no other word to describe it. To win the RX2 title in France in front of all my family, friends and fans is beyond my wildest dreams. It’s the one event I’ve been really wanting to win all year, but I genuinely never expected to secure the championship here. It was just one of those weekends where everything went right. We were very consistent throughout the Qualifying Races, although Guillaume [De Ridder] certainly put me under some pressure in the final – he pushed me right to my limits. The conditions were very tricky and I made a small mistake that cost me a little bit of time. My spotter was talking to me the whole way through, and kept telling me I needed to produce qualifying-style laps because as you saw, it got pretty close at the end! It was great to be on the podium with Guillaume as we have been friends for a long time, and I’m delighted for Vasiliy [Gryazin] too. There are honestly too many people to thank, but I need to mention my team Olsbergs MSE, who gave me a fantastic opportunity this year to compete in such a great championship. Finally, I must thank Dan [Rooke] for having really pushed me to drive at my very best all season; it clearly wasn’t his weekend here, but he has been a formidable rival and I’m sure we have many more exciting battles ahead. I don’t know yet what the future holds for me beyond South Africa, but I do know that the future for RX2 is very, very bright.”

Guillaume De Ridder (2nd): “I’m obviously very happy to be on the podium again, although admittedly a touch disappointed not to have won. I need to keep reminding myself that this is still just my sixth-ever rallycross event, and whereas many of my rivals compete in other series too, we do very little running away from race weekends but we’re pushing tirelessly to improve. William [Nilsson] and I worked well together during the Qualifying Races, but he was obviously unlucky in the semi-final. The first corner was more slippery than I was expecting and I overshot a bit which allowed William to take the lead, but he unfortunately made a mistake at the end of the lap that ruined his race. After that, I just got my head down and managed to escape. I then tucked in behind Cyril at the start of the final and felt very comfortable, although I was so close to him that with the rain coming down, I couldn’t see a thing through the gravel section. Saying that, I’m Belgian, so I’m used to driving in the wet! I felt I was quicker than he was, but in hindsight, I took the joker lap too early, which cost me some time as I got stuck behind Gryazin. I gave it my all, but ultimately, Cyril is a very tough nut to crack and he drove extremely well – I want to congratulate him on winning the title, which is very well-deserved.”

Vasiliy Gryazin (3rd): “It’s a great feeling to be on the podium for the first time in RX2. I’m a bit lost for words – this is a very emotional moment for me. It was always my goal to take a top three finish by the end of the season, and we’ve achieved it here. We really struggled in the rain earlier on in the year in Belgium and Norway, but we’ve done a lot of work in that area and now I understand a lot better how to drive in these conditions. The Qualifying Races obviously went really well, and it was a pretty smooth run in the semi-final too, although I did make a few mistakes in the last few laps as the nerves took hold! The final was actually a pretty lonely race for me, but I’m not complaining because we finished third, which I think shows the progress we have made in rallycross this year. To be one of only seven drivers to have reached the podium in RX2 proves just how tough and competitive this series is. It’s an amazing championship and hopefully we can put everything we have learned this year to even better use in 2018.”

Andreas Eriksson, RX2 International Series presented by Cooper Tires CEO: “First of all, congratulations to Cyril Raymond. He has been the class of the field in RX2’s fantastic first season, and he fully deserves the success he has achieved. To win the championship at his home event makes it even more special for him, and it was wonderful to see the incredible support he received from the enthusiastic French fans. Commiserations to Dan, but he has made a real impression this year and has every reason to be very proud of his own performance too. It’s always a joy to come to Lohéac, and this weekend was no exception. It’s hard to believe we only have one round of RX2 remaining in 2017, but South Africa promises to be an absolutely thrilling finale!”