FUN IN THE SUN AT RECORD-BREAKING THRUXTON THRILLER 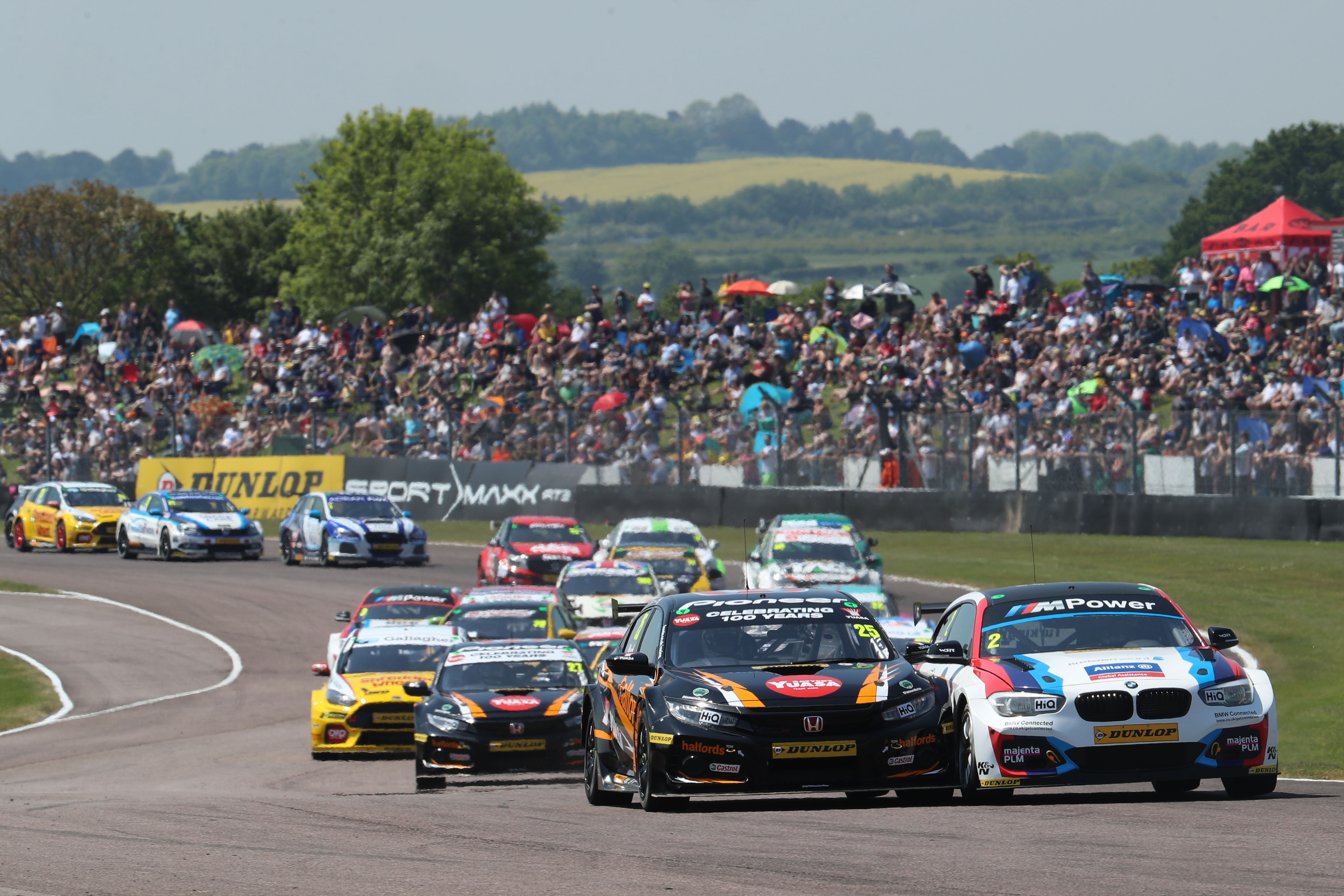 Thousands of fans have lapped up the high-octane thrills on a record-breaking Dunlop MSA British Touring Car Championship (BTCC) weekend at Thruxton, as the fastest drivers in the country put on a spellbinding show for the capacity crowds.

The UK’s leading motor sport series is always a major draw, and this year, record numbers of fans chose to eschew the Royal Wedding and FA Cup Final to flock to Britain’s quickest circuit.

A sun-kissed weekend saw victories for Matt Neal, home hero Josh Cook and Adam Morgan, whose race three triumph earned the Ciceley Motorsport star the championship lead. Two-time title-holder Colin Turkington made history in the first race as he broke a lap record that had held firm since 2002 – the longest-standing benchmark in the BTCC – before it was further lowered by a charging Tom Ingram in the day’s finale.

The popular Chicane grandstands and spectator banks around the circuit were filled with enthusiastic fans, while the new, £2 million state-of-the-art Thruxton Centre – due to be officially opened by motor sport legends Murray Walker and Nigel Mansell during Thruxton’s 50th Anniversary Celebration in a fortnight’s time (2/3 June) – received a rapturous reception, with the first guests soaking up both the sunshine and the action from the panoramic balcony.

“What a brilliant weekend!” enthused Thruxton Group Managing Director, Bill Coombs. “It’s obviously extremely satisfying to welcome another record crowd, which is testament to the enduring appeal of the BTCC and the first-class entertainment that Thruxton invariably produces – and with wonderful weather and some sensational racing, they all went home with smiles on their faces, which is great to see.

“The packed spectator banks looked fabulous in the sunshine, and the action was phenomenal across the board, from the young guns in Ginetta Juniors up to Britain’s biggest motor sport stars in the BTCC.

“Thruxton always generates superb slipstreaming scraps and close, competitive racing, and with battles throughout the field, there was something to catch the eye wherever you looked.

“Congratulations also to Tom and Colin for their lap record-breaking pace. To lower a benchmark that had gone unchallenged for 16 years – and on such a hot day, too – was quite an achievement.

“It was fantastic, finally, to see the new Thruxton Centre open for business for the first time, and the feedback we received has been universally positive, which is very gratifying. In building this facility, we were keen to really raise the bar and there is no question that it sets the tone for the circuit’s future. We now look forward to its official inauguration with Murray and Nigel at our 50th Anniversary Celebration.”

Advance tickets for Thruxton’s 50th Anniversary Celebration are available from just £12 for Saturday entry and £15 for Sunday – or £24 for both days. Sunday grandstand seats are an additional £5. Accompanied children aged 15 and under will be admitted free of charge.

For further information or to buy tickets, see www.thruxtonracing.co.uk/racing/50th-anniversary or call 01264 882200 and select Option 1.

Image Captions
Above: Capacity crowds enjoyed superb racing and wall-to-wall sunshine all weekend
Below top: The new Thruxton Centre received unanimous praise
Below row two: The action was fast-and-furious throughout the field
Below row three: The BTCC Pit-Lane Walkabout is always a popular draw
Below row four: Thruxton is marking its 50th Anniversary this year, and local hero Josh Cook had reason to celebrate too
Below bottom: The spectator banks were packed all around the track