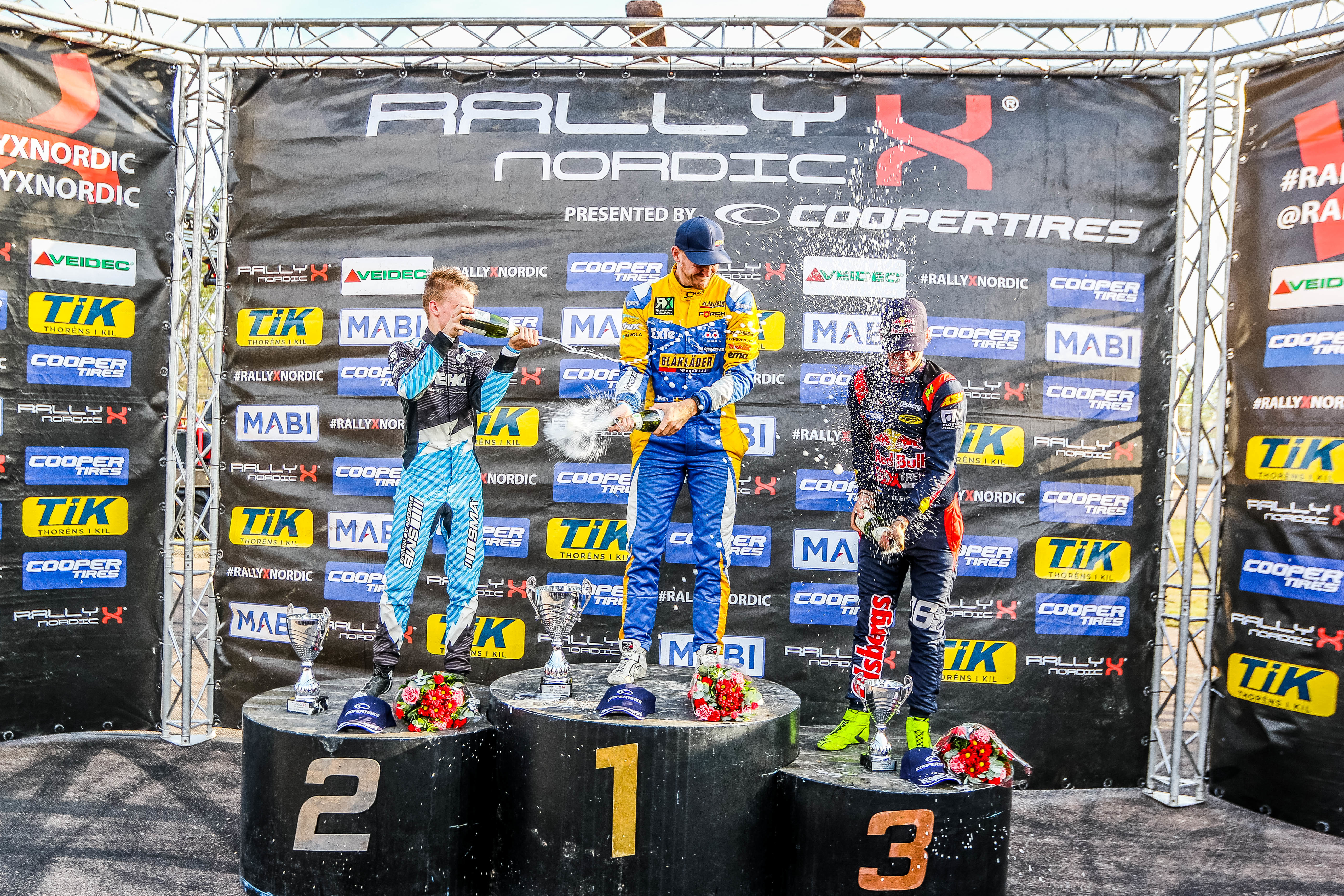 Robin Larsson’s second victory of the 2019 RallyX Nordic presented by Cooper Tires campaign at Kouvola last weekend (24/25 August) has seen the Swede narrow the gap to the top of the championship table to just four points – setting the scene for a nail-biting season finale at Tierp next month.

Larsson arrived in Finland trailing Oliver Eriksson by nine points in the title battle, but a supreme success for the JC Raceteknik man – allied to a brace of uncharacteristic errors by his Olsbergs MSE rival – have more than halved that deficit, paving the way for a tense three-way showdown in Sweden.

The third driver still in contention – sitting a further eight points in arrears of Eriksson – is fast Finn Jere Kalliokoski, who set the pace through the qualifying stages on home soil but didn’t quite have an answer for Larsson when he needed it the most.

Supercars: The fight for the title is on

Until Q4, Robin Larsson did not greatly fancy his chances of reaching the top step of the rostrum at former World Championship venue Kouvola, but a breakthrough ahead of his last qualifying race turned the situation around – and from there on in, the Swede was unstoppable.

After catapulting himself onto pole position for the final with a dominant semi-final win – more than five seconds clear of his closest pursuer – the 27-year-old then went unchallenged with a commanding lights-to-flag victory that has reignited his championship bid.

“This feels so good!” he grinned. “We really needed this weekend, and I can’t thank the JC Raceteknik guys enough for the changes we made to find the speed we did from Q4 onwards – we really didn’t have anything for Jere [Kalliokoski] until then. It’s an unbelievable result! We had no issues throughout and gained some points on Oliver [Eriksson] – it’s going to be an interesting finale at Tierp…”

While Larsson stayed calm and collected, his two title rivals both faltered. Home favourite Kalliokoski looked like the man to beat in qualifying as he sped to the fastest time in three of the four rounds, but a difficult first lap in his semi-final relegated the Finn to the second row of the grid for the final and, ultimately, dashed his hopes of victory. Despite never letting Larsson out of his sights, Kalliokoski was obliged to settle for the runner-up spoils.

Worse still befell championship leader Eriksson, who endured a rollercoaster weekend, setting the pace in the opening qualifying session before picking up a penalty for contact at the exit of the joker lap in Q4. The Swede responded in fine fashion by winning his semi-final by a staggering 7.6 seconds, only for a poor start in the final to drop him down the order and leave him with a mountain to climb.

Eriksson regrouped to bring home a podium finish in third, but with the result denting his overall advantage at the summit of the standings, everything remains to play for in the final round of the season in four weeks’ time.

In the bumper, 30-strong field in the headlining Supercar class, the well-represented home contingent certainly put up a stellar fight. An impressive showing from the Finnish national championship contenders was highlighted by Toni Kuhanen, Juha Rytkönen and Joni‐Pekka Rajala – the latter looking set to place higher before retiring with a technical issue – finishing fourth, fifth and sixth respectively ahead of a number of Nordic regulars.

RX2 Series front-runner Jesse Kallio won the Supercar Lites category at the first time of asking in RallyX Nordic. The Finn and championship leader Ben-Philip Gundersen were the pace-setters throughout the qualifying stages at Kouvola and each won their respective semi-final, but a slightly sluggish getaway for the Norwegian at the start of the final was all Olsbergs MSE ace Kallio required to usurp the advantage.

After bravely holding his nerve around the outside of the first corner, all manner of drama behind allowed the home hero to make good his escape – going on to sprint to a popular and unchallenged success on his series debut.

“It doesn’t get much better than this!” Kallio enthused afterwards. “It’s been a really tough battle all weekend, but we had a good semi-final and final. The first corner was really tight – I just sent it to the outside and after that I didn’t see anybody! This win is for all the Finns who came to support me.”

Gundersen’s day went from bad to worse when he was disqualified for contact as he endeavoured to fight back through the field. That should have given main rival Linus Östlund a golden opportunity to capitalise, but the Swede’s hopes were hit by a puncture that restricted him to fifth.

Sondre Evjen’s title hopes, meanwhile, were extinguished after the Norwegian failed to make the final – having already conceded ground with a spectacular double roll in Q4.

Finnish drivers locked out the rostrum in the RX Academy, with victory for Tommi Hallman practically halving the points gap to mid-season championship pace-setter Rasmus Tuominen, who took the chequered flag just over half-a-second behind his countryman. Jonne Ollikainen followed the pair home in third for his maiden podium finish of 2019.

The eagerly-anticipated RallyX Nordic season finale will take place – for the second consecutive year – at Tierp Arena in Sweden on 21/22 September, with all four title battles still to be decided and a thrilling weekend of high-octane action firmly in prospect.