GIRLS OF F1 TAKE THE DARE AT SANTA POD RACEWAY 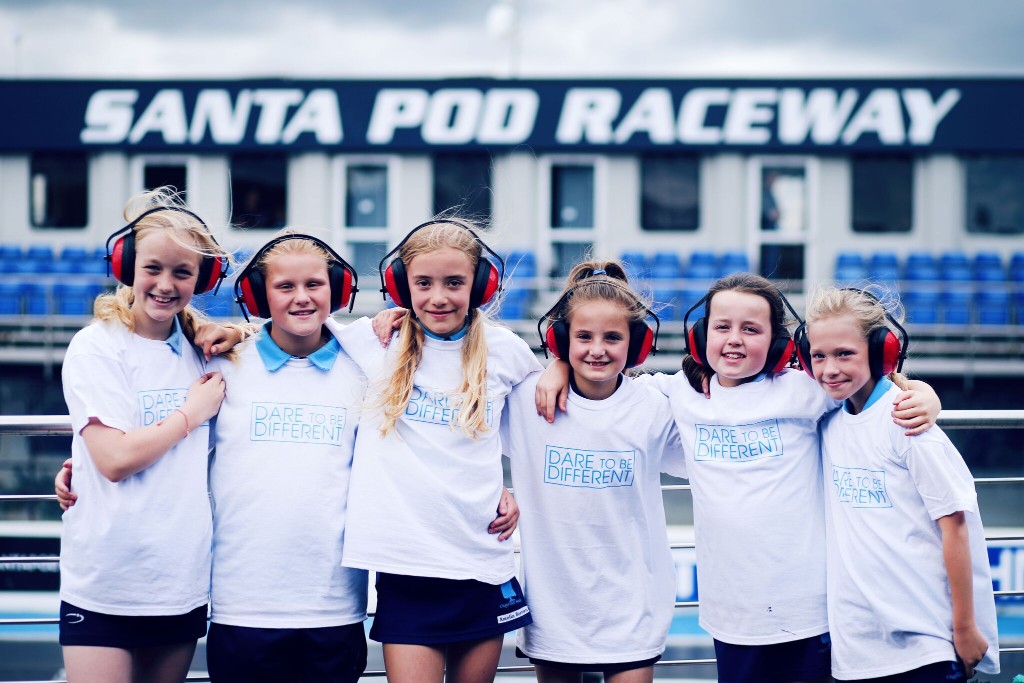 200 girls, comprising local school students and the daughters of Formula One team personnel, gathered at Santa Pod Raceway near Wellingborough on Wednesday and Thursday (20th and 21st June) for an eye-opening insight into the thrilling behind-the-scenes world of the motorsport industry.

Santa Pod, the home of European FIA Drag Racing, provided the perfect adrenalin-fuelled backdrop for the eight-to-11-year-old audience who were treated to impressive on-track displays by some of sport’s fastest female stars. One of these is a leading junior bike drag racer, 12-year-old Meggie Talbot,  who has been competing internationally since she was eight. Meggie put her race bike through its paces on the quarter-mile track to the delight of the excited crowd and afterwards spoke about her love of the sport and how she became involved.

In addition to witnessing the high-speed spectacle that Santa Pod had specially laid on,  the Dare To Be Different girls also took part in hands-on motorsport and STEM activities – real-life ‘tasters’  as to what a future in this and other related industries could potentially offer them.

Included in the timetable: A ‘pit-stop challenge’ where the girls worked in teams to change a wheel against the clock; interview and presentation tutorials with D2BD’s media ambassador Louise Goodman; a guided tour of a McLaren Formula One car; an entertaining, educational and team-building exercise to construct a working hoverboard assisted by National flagship programme STEMnet (Science, Technology, Engineering and Mathematics Network), a reaction-time test with the Pirelli Batak Board, a lesson in life-saving resuscitation techniques and vital aspects regarding health and safety. In addition, the F1 In Schools Programme was there to showcase its inspirational learning resources.

Santa Pod’s Robin Jackson says, “Dare To Be Different’s visit to Santa Pod has been rewarding and significant for two major reasons – it brings together spheres of motor sport that rarely meet; and also we hope will inspire a new, young generation of potential female participants. We are fortunate that female participation and achievement throughout drag racing is already at high levels to the extent that, within our sport, a driver’s or rider’s gender is simply not a story. Drag racing’s keenest contribution to Dare To Be Different might prove to be its long history of gender equality.”

Susie Wolff says, “It’s fantastic to have such a successful D2BD headline event at Santa Pod  and to combine this with the F1 daughters and schools day.  For most of the girls that were here,  this was their very first encounter with drag racing, a branch of motorsport which has been crowning female champions for decades. It’s been extremely inspiring for all of us on the D2BD team to see just how many girls and women take part in this discipline and how massively successful they are!

She continues, “The whole idea of Dare To be Different is about pushing girls out of the their comfort zones and encouraging them to try something new. Ultimately we want to see more girls coming into motorsport at grass-roots level and looking for careers within the industry.”

Launched by Susie Wolff MBE and the Motorsports Association back in 2016,  Dare To Be Different aims to inspire, connect and celebrate women not only in motorsport but in all perceived male-dominated industries. Since its inception, the ground-breaking project has already hosted over 25 headline events in the UK, Germany and Australia and touched the lives of almost 3000 primary-age school girls.

Exciting news for friend of MPA @JamieChadwick as she joins @INDYNXT with @FollowAndretti for 2023 🤩 twitter.com/followandretti…