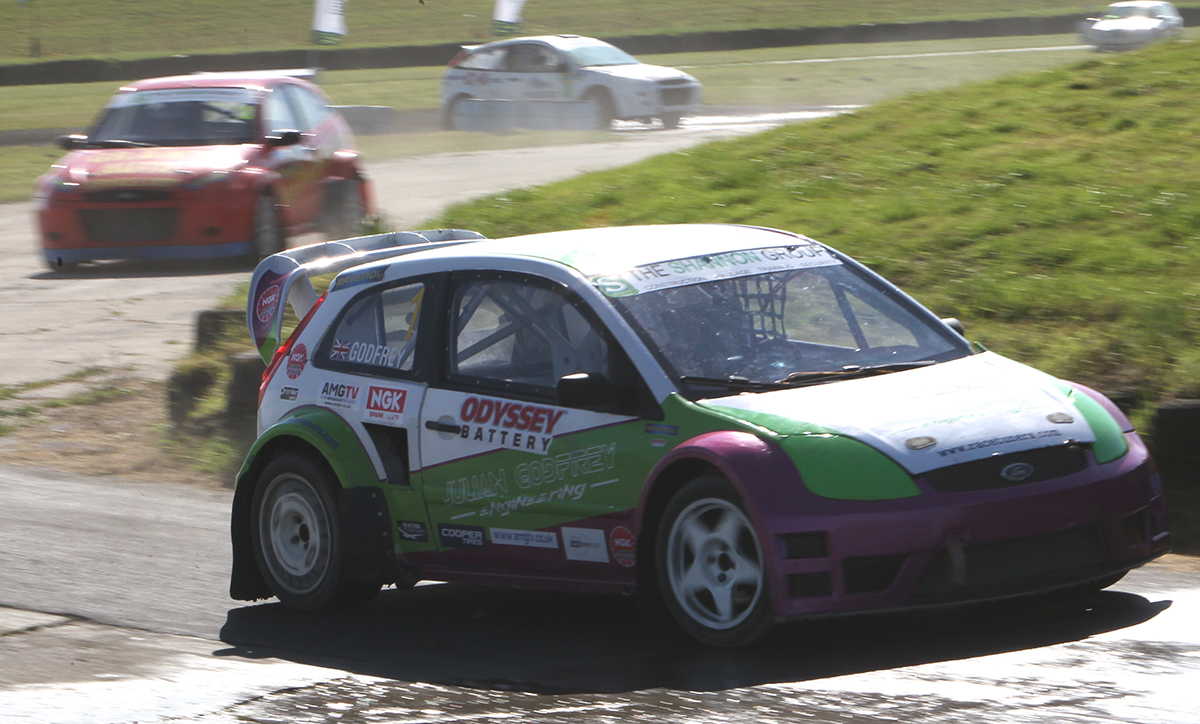 Defending title-holder Julian Godfrey extended his narrow advantage in the MSA British Rallycross Championship in association with the Shannon Group by triumphing in the sixth round of the 2015 campaign at Pembrey – with spectators treated to non-stop, nail-biting action throughout.

Early morning rain gave way to a day of brilliant sunshine in south Wales, and following the conclusion of the heat races, the tension truly mounted ahead of the all-important finals.

In the MSA Supercar class in association with Odyssey Battery, it was Godfrey on pole position in his Ford Fiesta, courtesy of a hat-trick of good heat times. Alongside him was the Peugeot 208 of Albatec Racing team boss Andy Scott, with Ollie O’Donovan rounding out the front row in his Ford Fiesta. Andy Grant lined up on row two in his Ford Focus, with the Mitsubishi Evo 10 of Steve Hill completing the grid.

From the off, it was Godfrey in command, getting the jump to lead into the first corner. He was pursued by Scott and O’Donovan – both of whom, along with Grant, took their jokers immediately – with Hill in fifth.

By the end of the opening lap, Hill had overhauled Grant for fourth, but up front, Godfrey and Scott were already locked into a battle for victory of their own.

Of the leading duo, it was Scott who took his joker first, managing to rejoin still in second whereupon he set off in pursuit of Godfrey. Although on occasion he closed him down, Godfrey had a big enough margin to be able to joker on the fifth lap and stay in front right the way to the flag.

“Today was all about making sure we got a good finish, and that we did,” reflected a delighted Godfrey once the chequered flag had fallen. “It helps our title challenge.”

“It was always going to be tough to beat Julian here when he was on pole,” mused Scott, content with the runner-up spoils. “Pembrey is a difficult circuit but I drove well, and the team did a great job running the two cars we had.”

O’Donovan dropped back to fourth when he picked up another puncture in his Fiesta – having suffered a similar issue in an earlier heat – allowing Grant into third place, while mechanical issues meant Hill did not finish the race.

Engine dramas thwarted Kevin Procter, who was a non-starter for the final, as was Kristian Sohlberg in the second Albatec Peugeot 208. The Finn had impressed spectators with his style and speed, but issues with the car during some of the heats and fumes entering the cockpit spelled an early bath. Steve Mundy in the Ford Focus was another to non-start.

In the MSA SuperNational class, Gareth Wood in the Ford Ka cut the deficit to championship leader Daniel Rooke by winning the final ahead of local hero Mike Howlin in his Ford Fiesta. Steve Cozens drove well to take the glorious-sounding Renault Clio into third place.

Rooke had been on the front row of the grid for the final, but gearbox woes stymied his progress and restricted him to fifth at the flag, having managed to hold the car in third gear to ensure a finish. Todd Crooks had been on the front row along with Wood and Rooke and finished fourth, while Stuart Emery endured various engine problems throughout the day, and a morning engine failure in her Lotus Exige ended Paige Bellerby’s hopes for any kind of result.

The MSA Juniors saw Bradley Durdin head home Drew Bellerby after a closely-fought final, with Sam Jones taking third. Bellerby held onto her championship lead by just four points as the next round at Lydden Hill in August beckons.

In the Swift Sports, it was Aidan Hills who took another win, this time heading home championship leader Tristan Ovenden. Hills made a good start from the front row as did Ovenden, and they battled for the lead to the end of the race.

Jack Brown pushed Ovenden all the way through the final before settling for third, while Rob Maynard finished fourth with Darren Scott fifth. Although Ovenden holds a 25-point lead, the next four places are blanketed by just 24 points, ensuring that the fight is far from over.

Craig Lomax won the Super 1600 class, while in Hot Hatch it was Tomasz Weilgosz that prevailed in his Peugeot 106. He headed home the Citroën Saxo of Tomasz Marciniak, with the similar car of Robert Potyra placing third.

In the RX150 Buggies, there was a late entry in the form of Tony Bardy, who joined Nissan star Jann Mardenborough in a great final. Mardenborough impressed all day, and led the final for a number of laps. However, a series of spins by several of the front-runners allowed championship leader Chrissy Palmer to come through to assume control, which he retained to the flag. Stephen Jones finished second, as Mardenborough recovered to take third.

Retro Rallycross also provided some superb heats during the course of the day, and in the final it was the Porsche 911 of Barry Stewart that triumphed from the MG Metro 6R4 of veteran Rob Gibson. Ian Shelley took third overall in his Mini after a great tussle with Stewart Bowes, with Paul Smith winding up fifth.