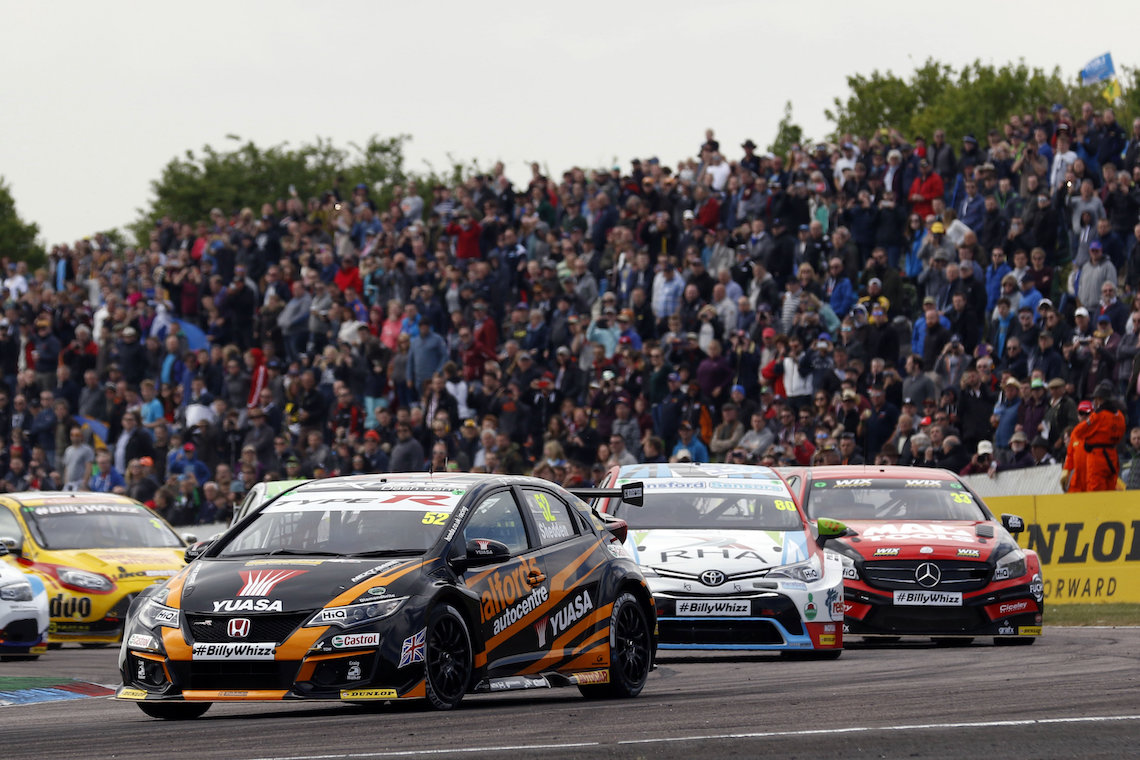 The 2017 Dunlop MSA British Touring Car Championship reaches its half way point next weekend (10/11 June) as the series’ pilgrimage around the best of the UK’s motor racing venues reaches North Yorkshire’s Croft Circuit for Rounds 13, 14 and 15 of the campaign.

A capacity 32-car grid will head north with drivers still searching for a foothold in Britain’s premier motor racing series, and the first dozen rounds of the season have been typically feisty and unpredictable – the fiercely competitive nature of the BTCC throwing up eight different visitors to the top step of the podium so far.

Five marques have been represented in the winners’ circle, with Subaru joining the fold with a maiden win in 2017 via star turn Ash Sutton at Oulton Park – the site of its historic first victory in the championship last year.

The power shifted in the Drivers’ standings following the latest three rounds in Cheshire, with reigning champion Honda’s Gordon Shedden wresting control at the head of the pack after a disastrous outing for early-season table-topper Tom Ingram in the Speedworks Motorsport Toyota.

The latter will be looking to bounce back after notching just a single point at Oulton, which shuffled him from top of the tree to third on the ladder between the Team BMW pair of Rob Collard second, and Colin Turkington, fourth – both winners at Croft in 2016.

A strong crowd is expected to descend on the charming, charismatic and challenging Croft Circuit to enjoy the mid-June sun with hundreds of thousands more watching the action live on ITV4, as is the case for each and every BTCC encounter.

A year on…
Gordon Shedden endured a tumultuous first half of the campaign in 2016 in his bid to retain his crown. By the time the Halfords Yuasa Racing champion arrived in North Yorkshire, he had suffered three non-finishes. Despite this, he still sat fourth in the championship.

Croft, though, did the Scot no favours with a weekend-best result of just 13th place and a race three finish outside of the top 20 leaving him marooned way down the order in the race for the most coveted crown in British motor sport – ninth and over 50 points shy of then-leader Sam Tordoff.

It’s a different kettle of fish in 2017, though, as Shedden stands in charge at the top of the pile as he searches for a third consecutive BTCC crown. A consistent run of results, with only one non-finish, a disqualification from a provisional race win at Donington Park, encompasses two race wins and five visits to the rostrum – double the number of each in comparison to this same stage last season.

This leaves the triple champion with a very different proposition at the classic Darlington venue this time around – heading the pack with maximum success ballast on board his Honda Civic Type R, albeit at the scene of his worst weekend of 2016.

“It’s fantastic to be heading there leading the championship, but the downside to that is having to carry 75kg of glorious ballast for qualifying and race one!” said Shedden. “That means we’ll need to play the long game, but hopefully the Civic Type R will do the business and the weekend will come to me as it goes on.”

“Croft is an interesting circuit,” he reflected. “It’s a little bit like a game of two halves with some really slow, technical corners and some really fast, high-adrenaline corners, which always throws up a few surprises.”

Those next up in the running will be hot on Shedden’s heels, ready to capitalise, and will have a job on their hands given Honda, with the exception of last year, are traditionally extremely strong at Croft with 13 wins there in the modern era – joint-most with BMW.

It is the Bavarian marque currently leading the chase with Team BMW’s Rob Collard – the only driver to have scored points in every race so far in 2017. He also happens to have a sparkling record there, having won twice in the last two visits, tallying five podium finishes since 2014.

Croft is a circuit that naturally favours rear-wheel drive machinery and the sister Team BMW machine, harbouring Colin Turkington, will surely be there or thereabouts as he aims to close on Shedden from fourth in the standings. The Ulsterman has garnered the most victories, podiums and fastest laps there in the last 20 years – 11, 19 and 7 respectively. Little wonder he has been dubbed the ‘King of Croft’.

Speedworks Motorsport’s Tom Ingram is in recovery mode and will be looking to make amends and get his title challenge back on track while Matt Neal in the second Halfords Yuasa Racing Honda Civic Type R is also in the mix – a stunning podium triple at Oulton Park made certain of that.

The third 125i M Sport, of BMW Pirtek Racing’s Andrew Jordan is currently some 50 points shy of the top of the table but a victory and a further podium at Oulton Park showed he is firmly in contention, as is the Subaru of Ash Sutton who is just ahead in the tally in sixth spot after his trip to the top step in Cheshire.

Local Heroes
Legendary BTCC champion Jason Plato has suffered a difficult 2017 to date, with fewer points on the board after the opening 12 rounds than ever before. A heavy start line shunt at the season-opening weekend was a factor and Plato will be hoping to be back at the sharp end on home soil, with the Subaru now a race-winning machine in 2017 in the hands of team-mate Ash Sutton.

“There’s progress on my car at times but we’re still trying to fathom what exactly is wrong with it,” said Plato. “At the moment it still won’t do what we want it to do.

“Mine is not responding in the same way as the other cars – we made changes on the others and got the same reaction from each, but made the same changes on my car and there was no reaction, so something’s not working.

“I always enjoy coming to Croft,” continued Plato, who grew up in nearby Newcastle. “It’s great to see familiar faces and the racing is always good. It’s usually a rear-wheel drive track and it suited the Subaru last year and hopefully we’ll make another step there with my car and we’ll see what we can do as a team. I’m looking forward to it.”

Huddersfield’s Dan Lloyd also calls Croft home and the MG man will be hoping to make a jump next weekend and build on a season-best 12th last time out, though matching his qualifying effort last year – a front-row berth – may be a tough challenge for the MG6 on current form.

Timetable and tickets
All three BTCC races on Sunday, 11 June alongside the rest of the day’s action will be broadcast live and in high-definition on ITV4, via the ITV Hub and streamed live at itv.com/btcc. Those in attendance at the circuit can stay in touch with the commentary and live timing from every session, available at btcc.net/live throughout the weekend.

The support series’ on the TOCA package are also guaranteed to thrill with a double digit total of races set to entertain the crowds. The Renault UK Clio Cup, F4 British Championship and two Ginetta series’ will all be in attendance in North Yorkshire, making for a packed weekend of truly unmissable racing.

Tickets can be purchased at discounted advanced prices at £11 on Saturday and £24 on Sunday, or £33 for the full weekend. Accompanied children aged 15 and under are admitted free. For further information see www.croftcircuit.co.uk or call 01325 721815.