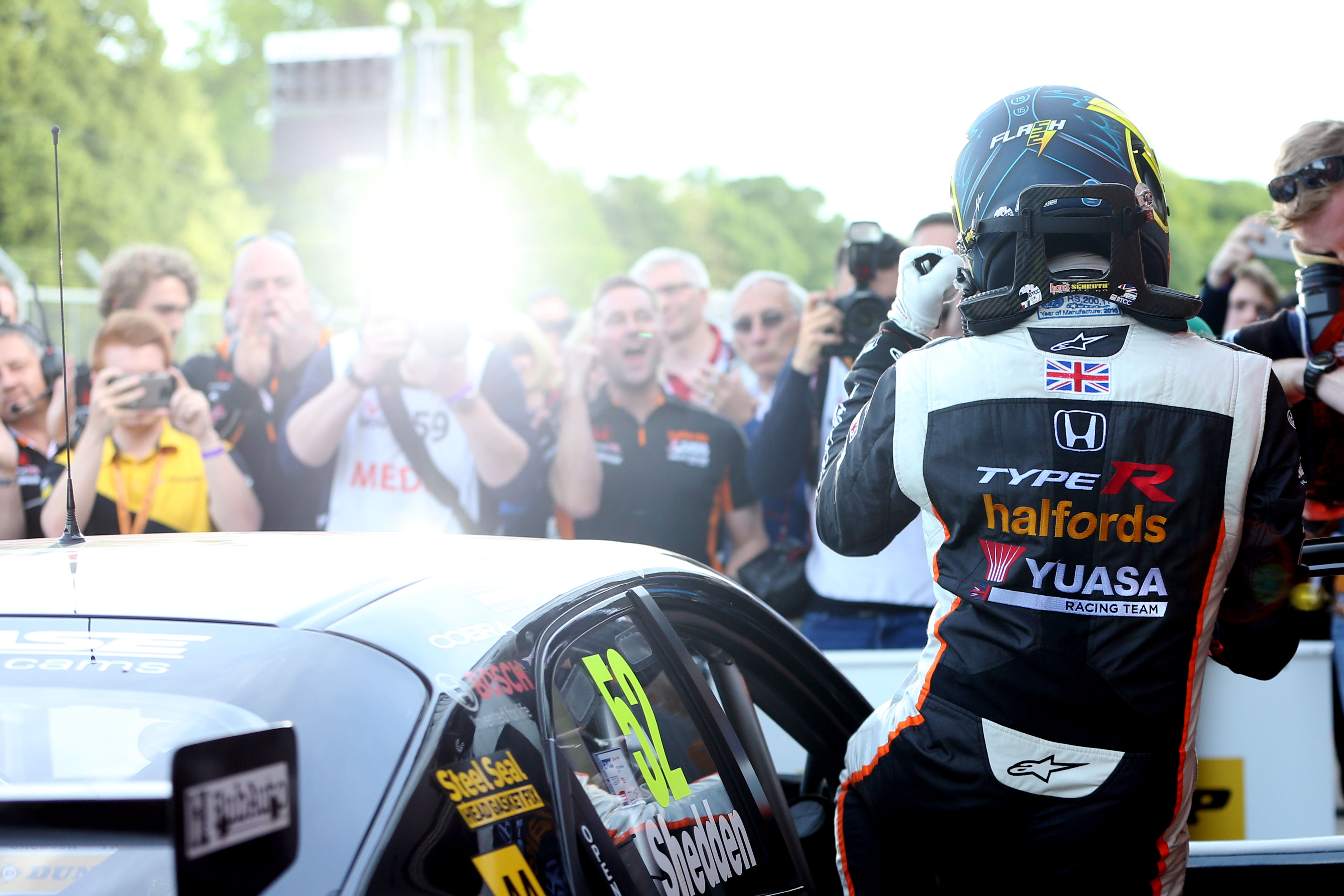 BMW Pirtek Racing’s Jordan fended off a Matt Neal fightback to claim the honours in a thrilling first race at the stunning Cheshire circuit.

Jordan blasted by pole-sitter Neal off the line as the rear-wheel drive 125i M Sport made its customary catapult start on the run down to Old Hall Corner for the first time. Critically for Neal, he was able to keep the sister BMW of Colin Turkington in his rear mirrors and could then set about recapturing the lead.

The top two pulled comfortably away from a sensational battle for third that often involved more than half a dozen cars.

After a series of position changes, the scrap for the final podium place built towards a tense climax. At one point Aiden Moffat squeezed Sutton’s Subaru onto the grass on the exit of Island Bend, allowing the previously demoted Turkington back by.

A fired-up Sutton would not be denied though, as he first went around the outside of Turkington at Lodge Corner and then repeated the trick on Moffat at Old Hall seconds later. Turkington was completely out of contention shortly afterwards, as he limped to the finish with an electrical problem.

Meanwhile, Neal was busy reeling in Jordan’s BMW up front, which was running the softer ‘option’ Dunlop SportMaxx tyre. The triple champion ran out of time, however, as the pair crossed the finish line separated by just 0.284s – confirming Jordan’s second win of the season.

Sutton claimed victory in the second contest, having produced yet another fantastic performance for Adrian Flux Subaru Racing.

Jordan maintained the lead from pole position off the line, whilst the rear-wheel drive machines of Sutton and Rob Collard gobbled up fellow front-row starter Neal.

Jordan’s BMW – carrying maximum success ballast following his race one win – couldn’t hang on for long, as Sutton slid his Subaru down the inside at Island Hairpin before completing the pass at Hislops on lap two. He immediately stormed away from the chasing pack as Jordan became the cork in the bottle behind.

Collard comfortably disposed of his stablemate Jordan, before the latter was impressively tag-teamed by the two works Hondas of Neal and Shedden. Neal edged inside of Jordan across the start/finish line as Shedden went around the outside into Old Hall Corner – creating a three-wide Honda-BMW-Honda sandwich. When the dust settled it was Neal in second with team-mate Shedden also getting past Jordan.

All credit in this contest though went to Sutton as the young gun scored his first win for Subaru and the second of his BTCC career.

The fight for victory wasn’t without incident however, as contact between Shedden and the pole-sitting Ford Focus of Josh Cook left the former with significant damage and out of the race.

Jordan had already assumed the lead by that point, but Shedden’s triumphant move was of the highest order as he scythed his way past at Cascades following a mid-race safety car period.

Neal immediately followed suit and the Honda duo went on to take the laurels ahead of Jordan, the latter sealing West Surrey Racing’s 150th podium with BMW in the BTCC in the process.

The Dunlop ‘option’ soft tyre was the rubber that proved to be the most effective in all three races with each of Jordan, Sutton and Shedden donning that compound on the way to the top step.

As the sun-kissed occasion drew to a close and the huge number of spectators made their way home, it was Shedden who had returned to the top of the table.

The consistent Collard – the only driver to score points in each of the 12 races so far – is now second, whilst previous leader Tom Ingram drops to third after a disastrous weekend for local team Speedworks Motorsport.

BMW holds an eight-point advantage over Honda in the Manufacturers’ battle, whilst the postitions are reversed in the Teams’ table – Halfords Yuasa Racing overhauling Team BMW.

Ingram and Speedworks still lead both Independents’ standings, despite their difficult weekend, whilst Vauxhall’s Senna Proctor maintains his position as the best-placed rookie.

Andrew Jordan said: “What a week it’s been! My partner had a little girl and now I’ve won again for BMW in the BTCC – life is good. It’s been a cracking effort from everybody at BMW Pirtek Racing. Ahead of this weekend, I was thinking ‘I really need to get my backside into gear now and do this’. I’ve made cracking starts this year, which added some pressure – people were telling me I should be leading by turn one! Thankfully, that’s exactly what happened and being on the soft tyres, I pushed hard to establish an early gap. Later on, they told me on the radio ‘Matt’s coming’, so I dug deep and was able to maintain the advantage – although if it had been a couple of laps longer, he might have got close enough to attempt a Matt Neal lunge! We’ve had a couple of dreadful weekends, but you don’t forget how to win and that’s a good message to send out.”

Ashley Sutton said: “That (race two) couldn’t have gone any better! After seeing the performance of the soft tyres in race one, I didn’t feel too confident, especially with an extra 57kg having been thrown at me but I got a great start and then the pace was just in the car. I had to get away as quickly as I could because we all know Rob Collard’s a charger and he was going to be coming after me, but I made the break just in time. It was then a question of managing the race, and it’s phenomenal to score the first win of the year for Adrian Flux Subaru Racing. We had a bit of a difficult start to the season, so this one is for all the boys – they’ve done a mega job to get the car to where it is now.”

Gordon Shedden said: “After my accident in FP2, the team did a mega job to prepare the car in time for qualifying and we managed to pull it back. Matt and I get the plaudits for standing on the podium, but yesterday was a true example of teamwork at its absolute best – and what a fantastic team we have. I drove my heart out in races one and two to grind some results out, and whilst they weren’t spectacular finishes, points do make prizes. Race three was pretty action-packed, but we had a lot of pace throughout and it really came to us. The Civic Type R came alive on the soft tyres – it was one of those races that could have kept going and going! My move for the lead was actually completely unplanned – Andrew (Jordan) jumped on the brakes very early into Cascades, so I just had to send it up the inside, which worked a treat – and to conclude the weekend with a one-two for the team was brilliant. It’s fantastic to be back in the lead of the championship, and whilst with that comes maximum ballast, as I’ve said before, I’ll take that any day of the week.”

Matt Neal said: “It’s been a cracking weekend! To be honest, we didn’t know what to expect coming here, but it worked out pretty well, didn’t it. Pole positions seem to be like buses at the moment – you wait for ages and then two come along all at once – and the Honda Civic Type R felt really well-balanced. I pushed hard in races one and two and to finish on the podium both times – particularly with 66kg in the car in the second of them – was great. We then lucked in with the reversed grid, but we had the pace to make it work and we made the most of the soft tyres. I covered Gordon’s back and in return, he opened the doors for me so I just had to make sure I stayed as close as I could to him to follow him through. I was actually more pleased with that one than the previous two – it was a real team effort, and what a result for Halfords Yuasa Racing and Honda! We needed a strong weekend, and this has lifted us right up there in the standings – we’re back in the game!”

Rob Collard said: “I’m extremely proud to take the 150th BTCC podium for WSR with BMW, which puts me in a strong position in the points. The BMW has been very good all weekend, as it usually is here, and three top five finishes is exactly what’s needed to keep up a head of steam in the title fight. The shortening of race two possibly cost me the chance to challenge for the win, because my end-of-race pace was quicker than the car ahead, but I guess we’ll never know.”