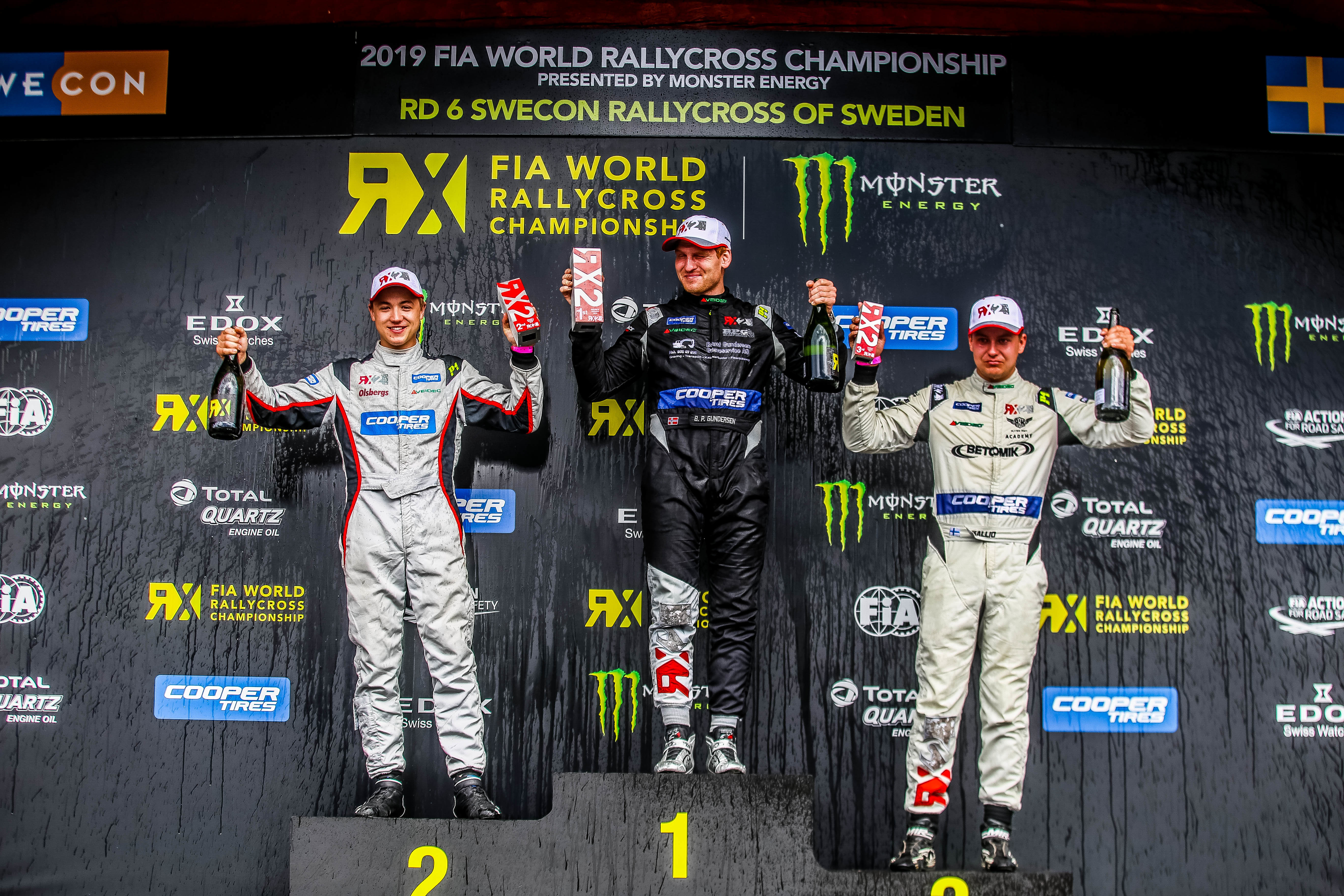 In front of just shy of 50,000 spectators at the legendary Swedish circuit and in a bumper, 21-strong field, Gundersen battled back from a troubled opening day with an ultra-committed semi-final performance followed by a lights-to-flag triumph in the final – the third success of the Norwegian’s RX2 career.

Local hero Linus Östlund was one of the stars of the show as he recovered from 16th place after Q2 to unleash Eriksson-beating pace in the second semi-final – indeed, it was only a slightly hesitant start in the final that kept him off the top step of the podium. Title protagonist Jesse Kallio took the chequered flag third to keep his unbroken run of rostrum finishes in his rookie campaign firmly intact.

Höljes served up a rollercoaster ride for the RX2 competitors throughout the qualifying stages, delivering drama aplenty – and Olsbergs MSE duo Eriksson and Kallio both experienced their fair share of ups and downs. Eriksson defied his outside grid slot in Q1 to steal the early initiative, before going quickest of the drivers faced with a fully wet track in a mixed-condition Q2, incurring a double penalty in Q3 and bouncing back to win Q4.

Kallio’s weekend got off to a much less successful start, with first corner contact in Q1 leaving him with a puncture that sent the Finn into a spin. That bad luck made way for good fortune in Q2, however, as his early starting position meant the 20-year-old was one of only three drivers to enjoy a completely dry run before the heavens opened. The second-best time in each of the remaining two qualifiers left the pair separated by just a single point in the intermediate classification in Eriksson’s favour – setting the stage for two scintillating semi-finals.

Vasiliy Gryazin was fast and consistent on his way to third for Sports Racing Technologies, with OMSE’s Fraser McConnell overcoming a Turn One collision in Q2 that left him nursing a broken rear wheel to race back up the order to fourth.

Östlund (Olsbergs MSE) was delayed by a spinning rival in Q1 and struggled with damage on the sodden track in Q2, but stormed back into contention in Q3 and Q4 to vault from 16th up to fifth. That placed him just ahead of Gundersen – who received a five-second penalty for contact in Q3 – hugely impressive series newcomer Martin Enlund in seventh and Mats Oskarsson, who produced a strong performance on his seasonal RX2 bow.

The semi-final line-up was completed by SET Promotion’s Sami-Matti Trogen, former Höljes podium-finisher William Nilsson – running as a private entrant for the first time – Jimmie Walfridson, whose weekend began in similar fashion to Kallio’s in Q1 and Simon Olofsson. The latter could count himself lucky to make the cut after picking up a puncture in Q4, but the Swede did pull off some of the most crowd-pleasing overtaking moves through the qualifying stages.

Amongst the nine drivers not to progress, the biggest hard-luck story could be told by Marcus Höglund. Running out of the Team Färén stable, the Swede broke his suspension in a first corner incident in Q1, received a 30-second penalty for missing the joker lap in Q2, soared to the fastest time of the weekend in Q3 and was leading the last race in Q4 and well on course to secure a top four spot in the standings when steering failure pitched him off the road and ended his spirited fightback.

Another driver in the wars was Petter Leirhol. Sitting third overall after Q2, the Norwegian found himself tipped into a spectacular barrel-roll in Q3. Following a superb overnight repair job by his mechanics, the Norwegian was back on-track in Q4 and looked set to salvage a semi-final spot until driveshaft issues dashed his dream.

Eriksson led away from Gryazin, Walfridson and Trogen in the first semi-final, but all eyes were on local specialist Östlund, who was the only driver to opt for an early joker. With the home crowd firmly behind him, the Swede got the hammer down, reeling in the battle for second and closing the gap to Eriksson with a brilliant display.

Then, drama struck as the leader suddenly slowed on lap four when his water pump belt came off, dropping him to the back of the pack and automatically elevating his Olsbergs MSE team-mate to the top spot. From there, the impressive Östlund continued untroubled to the chequered flag, with Trogen crossing the line second and Gryazin narrowly edging Enlund for third. After being forced into a spin at the first corner, the teenage prodigy was the fastest man on the track in an eye-catching recovery effort that capped a stellar maiden weekend in the official FIA World Rallycross Championship feeder series.

In the second semi-final, Kallio had to get his elbows out at the start to fend off Gundersen, with McConnell and Olofsson settling into third and fourth a little way behind. An earlier joker for Gundersen proved to be a masterstroke, as in clear air, the Norwegian left absolutely nothing on the table, wringing the neck of his Supercar Lites car to make the difference and emerge ahead when Kallio jokered on the last lap.

McConnell kept a watching brief in third, with Oskarsson staving off Olofsson’s advances for fourth and Nilsson rounding out the result.

As Östlund hesitated slightly off the line, Gundersen needed no second invitation to sweep into the lead, with the pole-sitter tucking in just behind and the pair soon breaking away from the chasing pack, headed by Trogen and Gryazin.

Östlund kept the pressure on throughout, but Gundersen was able to control the pace and ultimately, they were so evenly-matched that there was no change in the order, the pair flashing past the flag separated by barely half-a-second. Kallio’s early joker tactic yielded third place for the Finn, with compatriot Trogen holding off a hard-charging McConnell to add to his growing collection of fourth-place finishes this season. Gryazin wound up sixth.

Despite missing the final for the first time since Belgium 2018 and for only the second time in his RX2 career, Eriksson continues to lead the way into the summer break, albeit with a reduced 14-point margin over Kallio. The campaign will fire back into life at iconic French circuit Lohéac on 31 August / 1 September.

Andreas Eriksson, RX2 International Series presented by Cooper Tires CEO: “Wow, rallycross’ ‘Magic Weekend’ certainly delivered again! We’ve had twists, turns, spins, rolls, sun, rain and pretty much everything else in-between – and most of all, the fans have enjoyed some spectacular entertainment from our stars of the future, with close and exciting racing and some almost unbelievable storylines. Huge congratulations to Ben-Philip on his hard-fought victory, and Linus’ second place is proof that you should never give up because in rallycross, anything is possible – it’s never over until it’s over. The two of them thoroughly deserve their success, while Jesse’s third place continues his superb start to his first season in RX2 and confirms his status as one of the sport’s fastest-rising stars. Talking of rising stars, I must say a word for Martin Enlund, whose outstanding performance demonstrated what is achievable for talented young drivers on a level playing field on the international stage. Now, we turn our attentions to another classic rallycross track – Lohéac – and the resumption of the title fight.”