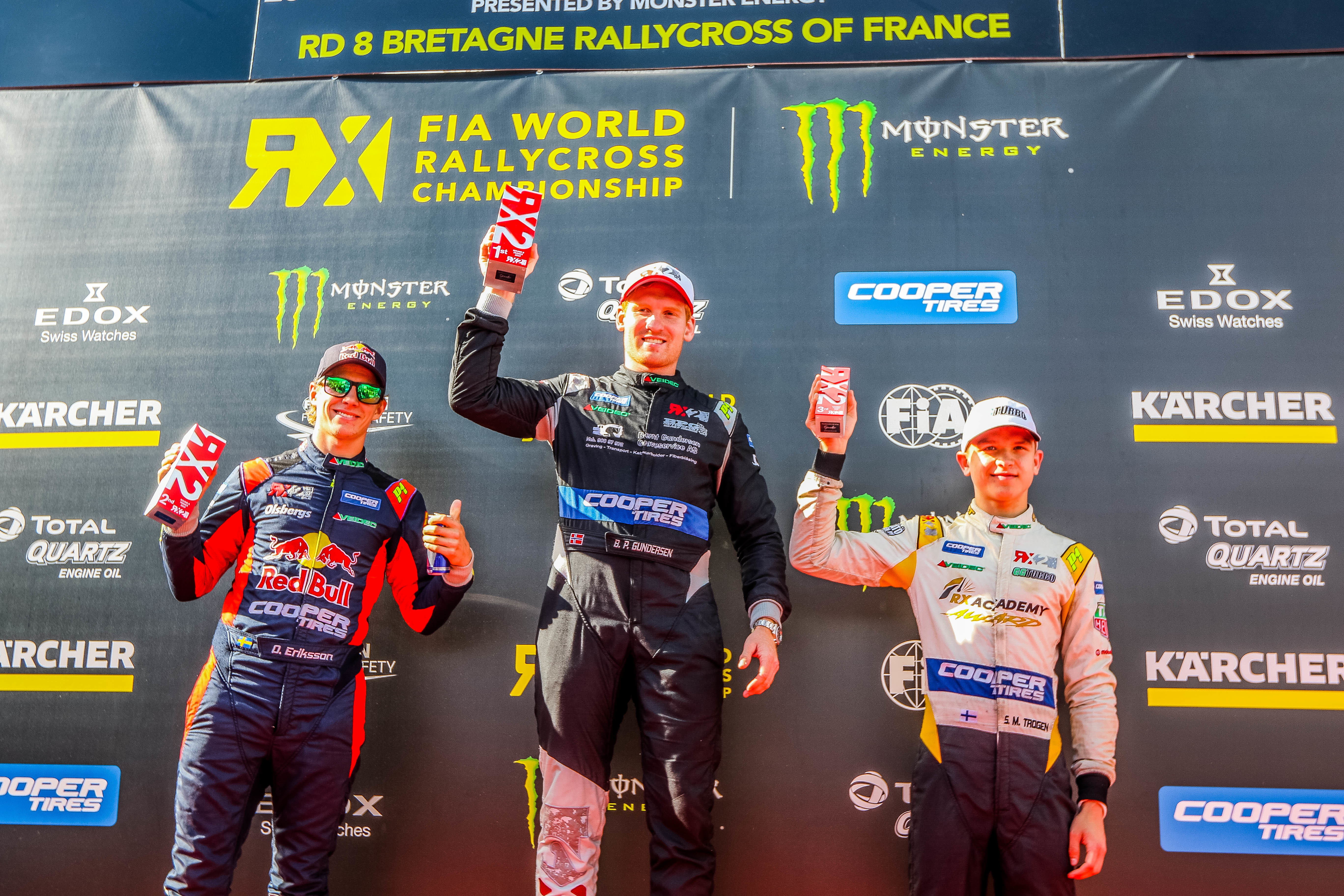 Epic, breathless, action-packed – take your pick. The final race of last weekend’s RX2 International Series presented by Cooper Tires round at Lohéac in France (30 August – 1 September) was a fast-paced thriller from lights-out to chequered flag – and it ended with Ben-Philip Gundersen’s second victory in swift succession.

Already laying claim to the move of the weekend in Q3 – leaving his braking as late as he dared into Turn One to sweep all the way around the outside of his adversaries and snatch the lead from fifth on the grid – Gundersen was on a mission in the final. This was quite possibly the most exciting and unpredictable race in the history of the official FIA World RX feeder series, with a plot line that changed from one corner to the next.

Some 75,000 enthusiastic spectators lapped up the drama as the Norwegian got the better of defending champion Oliver Eriksson over the course of an explosive last lap. The Swede held on for second from Sami-Matti Trogen, with the SET Promotion teenager replicating his rostrum result from the same event last year following a quartet of fourth-place finishes earlier this season.

Eriksson took the top spot in the intermediate classification after setting the pace in both Q1 and Q2, though the championship leader endured a rougher ride in Q3 and Q4, coming off worse in first corner squeezes on both occasions. Nonetheless, he had already done enough to remain at the summit of the standings.

Gundersen ran the Swede closest, with his Q3 heroics vaulting the Norwegian up the overall order into second place. Jesse Kallio’s Q4 success produced a similar effect as the Finn kept his title aspirations intact in third.

After sitting an impressive second overnight, Trogen ultimately slipped to fourth due to traffic in Q4, with Fraser McConnell battling back from broken suspension in Q2 to secure fifth position courtesy of a trio of top five performances.

Latvian brothers Vasiliy and Nikolay Gryazin were evenly-matched in sixth and seventh respectively – although the latter, making his RX2 debut at the weekend, would have featured higher up but for a late slide in Q4 that cost him time. William Nilsson was next in his maiden appearance for Team Färén, putting a first corner spin in Q2 behind him with top four efforts in both Q3 and Q4.

The semi-final line-up was completed by reigning EuroRX TouringCar champion Steve Volders, former X Games gold medallist Petter Nårsa – who got quicker with every run on his series bow – Anders Michalak and home hero Damien Meunier. The Frenchman lost ground in Q2 with a puncture, but delighted the partisan crowd by narrowly making the cut.

That meant Simon Olofsson, Albert Llovera – who enjoyed arguably his most competitive RX2 outing to-date, posting a top ten time in Q2 – American newcomer Lane Vacala and local specialist Yann Le Jossec missed out. The latter showed flashes of form, but an electrical issue that ruled him out of Q1 and a last lap collision in Q3 ultimately sealed his fate.

From pole position in the first of the semi-finals, Eriksson led team-mate Kallio throughout, with the top two pulling away from the chasing pack and the Finn closing right onto his title rival’s tail by the chequered flag.

In the third OMSE car, Jamaica’s McConnell saw off Nikolay Gryazin – the pair indulging in an energetic and entertaining wheel-to-wheel scrap along the way – for the remaining final spot. Volders wound up fifth, surviving a coming-together with Michalak that pitched the Swede into a spectacular roll and prompted a re-start.

In the second semi-final, Gundersen found himself needing to fend off a feisty-looking Trogen on the opening lap, and the Finn kept the pressure on as the pair sped clear of their pursuers. Vasiliy Gryazin ensured SRT would be represented in the final by taking the flag third – albeit some way back from the top two – with Nilsson just missing out in fourth after an early joker tactic left him stuck in traffic. Meunier placed fifth, while Nårsa’s challenge was scuppered by a puncture.

If ever there was a candidate for race of the season – scratch that, make it best race in RX2 history – this, surely, was it. Eriksson withstood the initial threat posed by Gundersen through the first corner, but further back there was a change for third as Trogen muscled his way past countryman Kallio and McConnell followed through – then immediately darted for the joker.

Gundersen got a run on the race leader starting lap two, only to find the door shut solidly in his face, but there was greater drama unfolding behind. Gryazin tried to relieve Kallio of fourth at the last corner and – as the pair drifted wide – the opportunistic McConnell took advantage to pass them both. The Finn and Latvian would subsequently come together again at the same place, resulting in a spin for the OMSE driver that rooted him firmly to the foot of the order.

Up at the front, meanwhile, new second-placed man Trogen was ramping up the pressure on Eriksson, with early joker Gundersen in third and on a charge. The top two waited until the last lap to play their jokers, but by then it was too late and the JC Raceteknik ace was through – just. Eriksson tried to fight back into the penultimate corner, but Gundersen held his ground and forced the championship leader wide to secure his fourth career RX2 victory and move up to third in the title standings.

The Swede had to get swiftly back on the gas to hold onto second place, with Trogen and McConnell both fancying a late sniff of the runner-up spoils and the Finn crossing the line sideways in the three-way squeeze. Less than 1.7 seconds blanketed the top four at the flag, with Gryazin and the frustrated Kallio completing the finishing order.

The result sees Eriksson carry a 21-point margin over Kallio into the 2019 RX2 season finale at Cape Town’s Killarney International Raceway on 9/10 November – as the South African circuit prepares to stage a dazzling duel for the coveted crown.