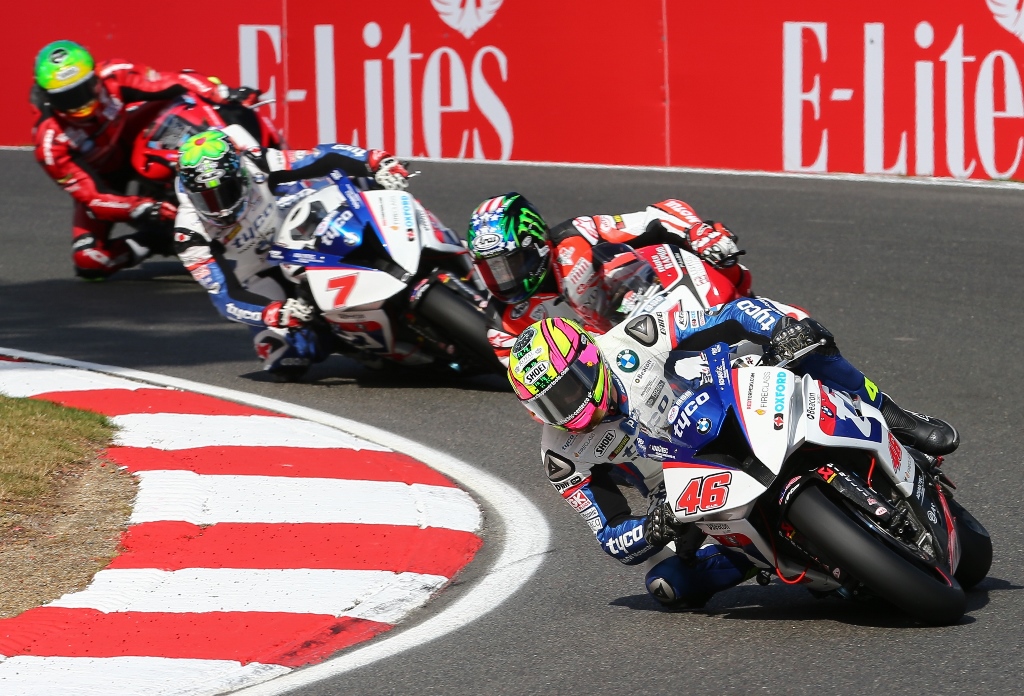 When the MCE Insurance British Superbike Championship speeds into Britain’s fastest circuit this weekend (31 July – 2 August), two riders in particular will be looking to shine as they take to the track on home turf for the JG Speedfit round.

Hailing from just up the road in Etchilhampton (Wiltshire), Tommy Bridewell has enjoyed a solid run of results thus far in 2015, missing the points on only four occasions in 12 races and tasting victory champagne at Oulton Park back in May. Despite his consistency, however, that remains the Tyco BMW ace’s sole podium finish to-date this year – a statistic he is eager to rectify in front of family and friends this weekend.

“At Thruxton, we need to move forward after Brands Hatch, because we have been losing a little bit and I need to ride more within myself rather than pushing too hard and crashing like I did at the last round,” the 26-year-old reflected. “I have never really had a good track record at Thruxton, mainly through bad luck, and I obviously want to turn that around as it’s a circuit I like because it is so fast and one where we can push the Tyco BMW.

“In terms of how our season has gone so far, you can look at it in different ways. ‘Kiyo’ [Ryuichi Kiyonari] was on the same points as me at this stage last year and took the title battle to ‘Shakey’ [Shane Byrne], so we are still not finished, that’s for sure! Where we are now isn’t where we would have hoped to be, but we knew at the start of the season we would be behind on knowledge because of the new bike in relation to some of our rivals who have other seasons to compare to.

“I have been the top BMW in pretty much all of the races and that is important, but at the same time we’re not winning right now and that is what we have to change. I need to be finishing on the podium and get it turned around to make the fight for the title. This is far from over, and I think if we get it right at the next few rounds we would have no issue in fighting for race wins again.”

The other ‘home’ rider in the field is John Hopkins. Whilst not strictly a local – California is a little further away than a hop, skip and jump – when over here, the former MotoGP and World Superbike Championship star bases himself in nearby Portsmouth and following an encouraging debut aboard the Lloyds British Moto Rapido Ducati 1199 Panigale at Brands Hatch, ‘Hopper’ is palpably relishing a rematch this weekend.

“I’m really looking forward to Thruxton, especially on this bike as the characteristics should suit the fast and flowing track – the power delivery and stability of the chassis I believe will put us in a good position,” he mused. “We have seen the bike has gone well there before, so we now need to build on Brands Hatch.

“The team have a good set-up there from last season, and even at Brands Hatch I was surprised at how little we needed to change on the Ducati so I imagine that will be the same for Thruxton. We also have some new parts to test, so that’s exciting too. I am over the moon with how it went at Brands Hatch – and that is a real confidence boost before Thruxton.

“I think to be pushing for the top five isn’t a far-fetched goal at all. We want to go into the weekend and be fighting for that position straightaway, which is what we are aiming for. To have Ducati in the mix is great, especially as we know what a competitive championship this is. I will be grasping this opportunity at Thruxton and pushing as hard as I can with the team to improve on what we had at Brands Hatch and put on a good show for the fans.”

Tickets are available on the gate, priced from £7 for Friday entry, £14 on Saturday and £32 on Sunday. Accompanied children aged 15 and under are admitted free of charge. For further information, visit http://www.thruxtonracing.co.uk/racing/bsb or call 01264 882200 (Option 1).

A short preview video to whet the appetite can be viewed at: https://www.youtube.com/watch?v=hETlf_fvbrY