HONDAS SCORE A HAT-TRICK AT THRUXTON 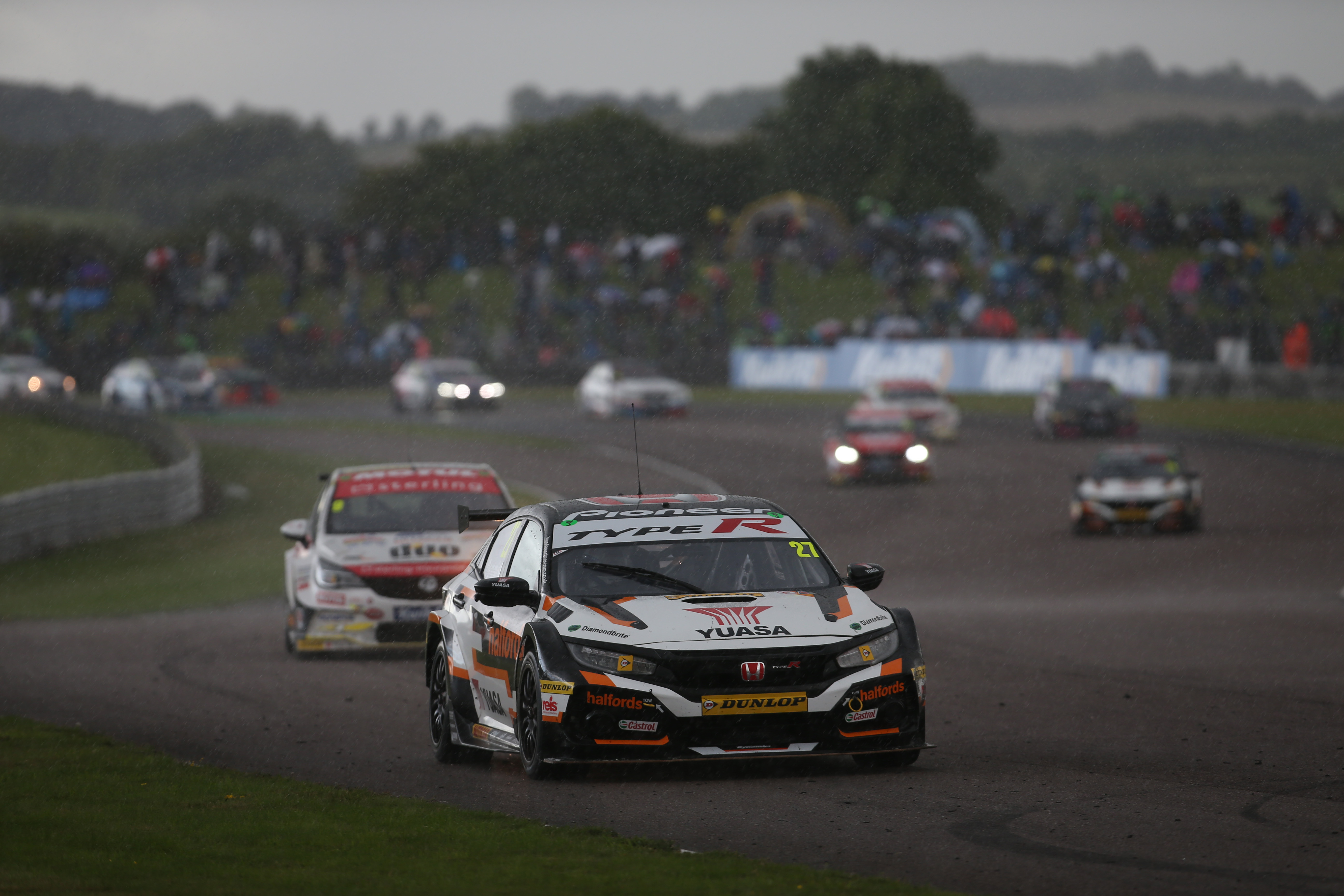 Rounds 19, 20 and 21 of the 2019 Kwik Fit British Touring Car Championship went the way of three different Hondas on a day of thrilling action at Thruxton.

Cobra Sport AmD AutoAid/RCIB Insurance’s Sam Tordoff converted pole position into victory in the opening contest, before BTC Racing’s Josh Cook topped the second bout. Dan Cammish then claimed a first win of the season for Halfords Yuasa Racing in a fantastic finale – making it 16 wins from 30 for the Japanese marque in Hampshire over the last decade.

Success for Cammish and Cook in particular also brought about a change to the overall title picture, as they closed in on the championship-leading BMWs of Colin Turkington and Andrew Jordan, who both experienced a challenging weekend.

Tordoff secured a lights-to-flag victory in race one, after fellow front-row starter Jason Plato fell foul of a drive-through penalty having started the race out of position in his Sterling Insurance with Power Maxed Racing Vauxhall.

Cammish, Adam Morgan and Cook kept Tordoff honest until the finish, with the quartet being covered by a little over a second at the chequered flag.

Cook then scored an eye-catching victory in the second summer BTCC bout in Hampshire, making one of the moves of the season as he went from third to first in the blink of an eye.

The success ballast-laden AmD Honda of Tordoff held the advantage in the early running, but the Yorkshireman had Morgan’s Mac Tools with Ciceley Motorsport Mercedes-Benz and Cook’s Civic Type R swarming all over the back of him.

Morgan made his attempt down the inside having exited Church on lap four – the fastest corner in the country – while Cook tried the outside on the run down to the final chicane. All three cars made it through without any contact and emerged across the start/finish line with Cook leading the way. He never looked back, winning from Morgan by nearly two seconds.

A huge scrap for third ensued behind with a ballast-laden Tordoff the cork in the bottle at the head of a queue of cars. Unfortunately for the race one winner, the pressure eventually told on lap 11, and he was shuffled down the order.

Team BMW’s Tom Oliphant and Halfords Yuasa Racing’s Matt Neal ran in third and fourth respectively as the final place on the podium was decided at the last corner. Neal’s Honda Civic Type R got a great run on the 3 Series ahead of him and the triple BTCC champion nipped through around the outside at the final chicane to reach the rostrum – crossing the line just 0.080s ahead of Oliphant.

Cammish – scorer of eight podiums from the previous 14 races – then broke his, and Halfords Yuasa Racing’s, 2019 race-winning duck in the reversed grid bout.

A sticky start in the second contest sent Cammish slightly down the order, and lightning looked like it might strike twice when he fell to third from the front row in the final encounter.

It was the fast-starting BMW of Oliphant that had nipped in front of Cammish, while Sterling Insurance with Power Maxed Racing’s Rob Collard led the way.

The lead trio pulled away whilst battles commenced throughout the order, but it was all eyes on the front-runners as Cammish slipped into second midway through the scheduled 16 laps.

With grey skies looming, rain began to fall on the classic 2.4-miles of Tarmac and cars immediately twitched gingerly around the fastest circuit in the country.

The moment of truth came on lap ten when Collard’s Vauxhall Astra wiggled through Church, dropping his rear-left wheel on the grass in the process. With a loss of momentum on the run to the final chicane Cammish was able to blast his Honda Civic Type R around the outside and into an unassailable lead.

Collard held second until the finish but it was Oliphant who was now struggling in the damp conditions as he dropped to seventh, meaning Neal would eventually join his Honda team-mate on the podium.

Turkington and Jordan collectively endured their toughest weekend of the season so far, taking a best result of ninth and seventh respectively, meaning Cammish and Cook’s impressive points hauls have reignited their championship hopes.

Turkington now leads the Drivers’ standings by 30 points from Jordan, with Cammish and Cook just a handful of points further back.

BMW top the Manufacturers’ order but Halfords Yuasa Racing has now moved ahead in the Teams’ table.

Cook and his BTC Racing squad are at the summit of the Independents’ standings, whilst Rory Butcher still holds the advantage in the Jack Sears Trophy.