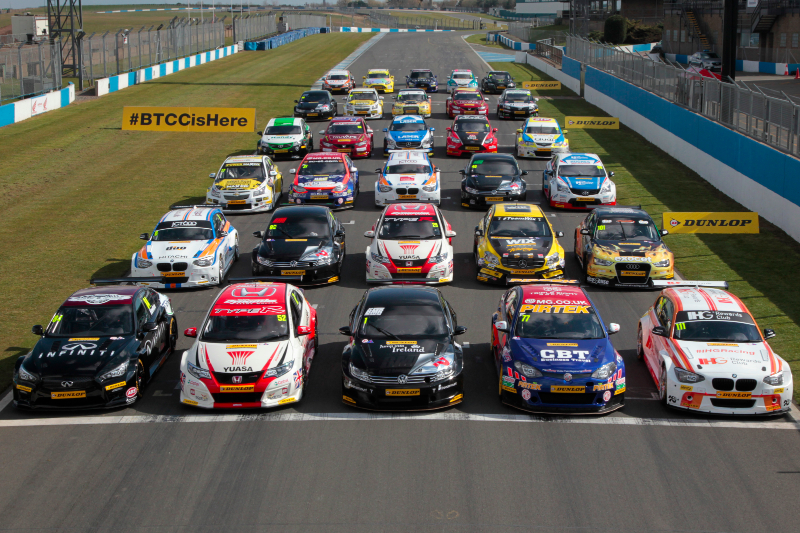 This year marks the second all-NGTC (Next Generation Touring Car) specification season and the fifth campaign since the regulations were first introduced. Such has been the success of the technical rules that they have been endorsed by the sport’s international governing body, the FIA, for use in touring car racing across the globe.

The diversity of cars also continues to grow in the BTCC, with premium car manufacturer Infiniti joining the championship and becoming the 12th marque to be represented in the NGTC era.

This year’s Dunlop MSA British Touring Car Championship will again comprise of 30 races across ten events at nine venues around the UK, with the season commencing at Brands Hatch on 4/5 April and concluding on the legendary Grand Prix circuit at the same venue on 9/10 October.

ITV will continue to broadcast each and every race live and in high definition on ITV4, with further highlights shown on ITV. The weekend crowds regularly reach between 30,000-40,000 at each venue.

All change at the top
It has been a whirlwind winter for the BTCC with major news stories and driver announcements breaking throughout the off-season.

The series, which is renowned for its competitiveness and unpredictability, looks set to be cranked up a further notch in 2015 as all of its competing previous champions have changed machinery for the season ahead.

Reigning supremo Colin Turkington arguably produced the biggest surprise after it was announced he would be joining Team BMR. The online reveal for the fledgling and ambitious team reached fever pitch, however, when it was also confirmed that fellow double Champion Jason Plato would be joining Turkington as team-mate.

It will be the first time that Plato and Turkington have raced for the same outfit together and unsurprisingly the first time in the recent history of the series that the previous year’s top two drivers have joined forces at a new team. Aron Smith and Team Boss Warren Scott complete the squad’s four-strong VW entry.

With Plato and Turkington creating room at Triple Eight Racing and WSR respectively, both leading teams moved quickly to fill the void with headline announcements of their own. In fact before the sensational deals had even been inked at Team BMR, it was the manufacturer-backed MG squad at Triple Eight Racing who’d pulled off the biggest capture of the pre-season so far.

Former Champion Andrew Jordan confirmed his departure from both the Honda family and of course his own family-run Eurotech team to take up the reins as lead driver for MG. The 25-year-old has wasted little time in getting up to speed in the often pace-setting MG6, having completed an extensive pre-season test programme. Jack Goff, concluding an all-new line-up for the reigning manufacturer champions, will partner Jordan at Triple Eight Racing.

WSR soon announced their own top class signing with triple World Touring Car Champion Andy Priaulx joining Rob Collard and young gun Sam Tordoff at the 2014 quadruple winners. Furthermore the Surrey-based squad has been promoted to compete for Constructor honours within the Manufacturer/Constructor championship this season, and as such will be targeting that rather than defending its Independents’ title.

Honda Yuasa Racing is the only front-running team to possess continuity in its driving ranks with both Matt Neal and Gordon Shedden staying with the team for a sixth successive season. The variables in predicting this year’s title chase just keep on coming, however, as the squad switch from the Civic Tourer – last year’s race-winning estate model – to the all-new and much anticipated Civic Type R.

Build of the BTCC Type R – officially unveiled at today’s Season Launch – has only been completed in the last week and has undergone limited testing to date. What is known, however, is that Team Dynamics know how to build championship-winning cars, having done so several times previously. The car itself is also one of the most eagerly awaited in years as the legendary Japanese model hits the track before even reaching the road, with the production model not expected to arrive in UK showrooms until later in the year.

Infiniti Support our Paras Racing also brings two fresh faces into the driver line-up with Richard Hawken and Derek Palmer being handed duties behind the wheel. The squad joins Honda and MG as official manufacturer-backed entries, whilst the previously noted BMW’s of WSR will also challenge for Constructor honours within the Manufacturer/Constructor Championship.

Another standout name among the new entries is that of Nicolas Hamilton, whose part-season drive was also announced today. The brother of current Formula One World Champion Lewis, will become the first disabled competitor to participate in the Dunlop MSA British Touring Car Championship. The 22-year-old, who lives with the neurological condition Cerebral Palsy, will enter five race weekends of the 2015 BTCC season, competing in an Audi S3 saloon with AmD Tuning.com, with a view to hopefully contesting the complete season in 2016.

Nicolas will begin his 2015 guest entry programme at Croft in June, before continuing his season at Snetterton, Rockingham, Silverstone and Brands Hatch.

Motorbase Performance is also scheduled to contest a part-season – from Snetterton onwards – whilst the remaining 29 entries will complete the full BTCC campaign.

One of the most varied grids of any major motor sport championship in the world, the BTCC will boast some 12 models from 11 different marques in 2015.

Rules of Engagement
Whilst the stability of the NGTC regulations and 2014’s introduction of TBLs (TOCA BTCC licences) – required for teams in order to guarantee participation ­– are critical to the overall success of the BTCC, the championship is always keen to make improvements to the regulations where possible. For 2015 some of these are;

Perfect Partners
Stability and longevity among its partners and sponsors remains a key asset to the BTCC with all of its major ongoing commercial partners cemented for multi-year deals.

Dunlop extended its title sponsorship and tyre supply term in 2014 and ITV will continue to broadcast exclusive live coverage of every event until at least the end of the 2016 season.

ITV will screen around seven hours of live free-to-air coverage from every race day on both its ITV4 and ITV4 HD channels as well as its popular website. Adding to the coverage are 60-minute edited race highlights repeated three times after each event on ITV and ITV4 as well as their respective HD channels and ‘simulcast’ on itv.com. In total more than 230 hours of the BTCC will be broadcast across the ITV network this season.

Organisers have also worked tirelessly to improve the overseas TV coverage of the series as the global popularity of the BTCC continues to grow.

The off-season has seen the series clinch its largest ever television deal in North America, after agreeing a multi-year contract with broadcast giant CBS Sports Network (CBSSN). This latest agreement means that the BTCC will be available to more than 500 million homes worldwide in 2015, across five continents, with further significant international broadcast arrangements soon to be announced.

The Haymarket Consumer Media group joined the BTCC’s family of partners last season and will continue to provide extensive and in-depth BTCC content across all of its major publications, with Autocar, WhatCar? and PistonHeads.com.

Intercontinental Hotels Group will be using its backing of the BTCC to promote the popular IHG Rewards Club from the 2015 season onwards.

BTCC Series Director Alan Gow said: “The BTCC is renowned for its extreme competitiveness and the levels of unpredictability seem set to reach new standards in 2015. There have been several key and very interesting moves in the driver market over the winter, which ensures we’re in for yet another unmissable campaign. Your guess is as good as mine when it comes to predicting an eventual champion but what is for sure is that we’re in for another titanic battle – I, just like our millions of fans, can’t wait to get started.

“The levels of success do not come easily of course and it is testament to the tireless work from everyone involved in the series that we’re able to again announce such a great grid for 2015.

“Our impressive entry list continues to demonstrate the stability of our regulations whilst the new tweaks made to our format also show we’re always committed to moving forever forwards. Improving the show for our fans and competitors alike is paramount to everything we do here in the BTCC and we believe these evolutions will prove successful.

“The longevity and loyalty of our major partnerships, including Dunlop, ITV, Intercontinental Hotels Group and more, continue to far exceed industry standards and their support is hugely valued.

“The trackside and TV audiences continue to reach new highs proving exactly why the BTCC is Britain’s only show in town – here’s to another hugely competitive and successful season ahead.”