Ingram leads the way as BTCC Hybrid Era blasts off 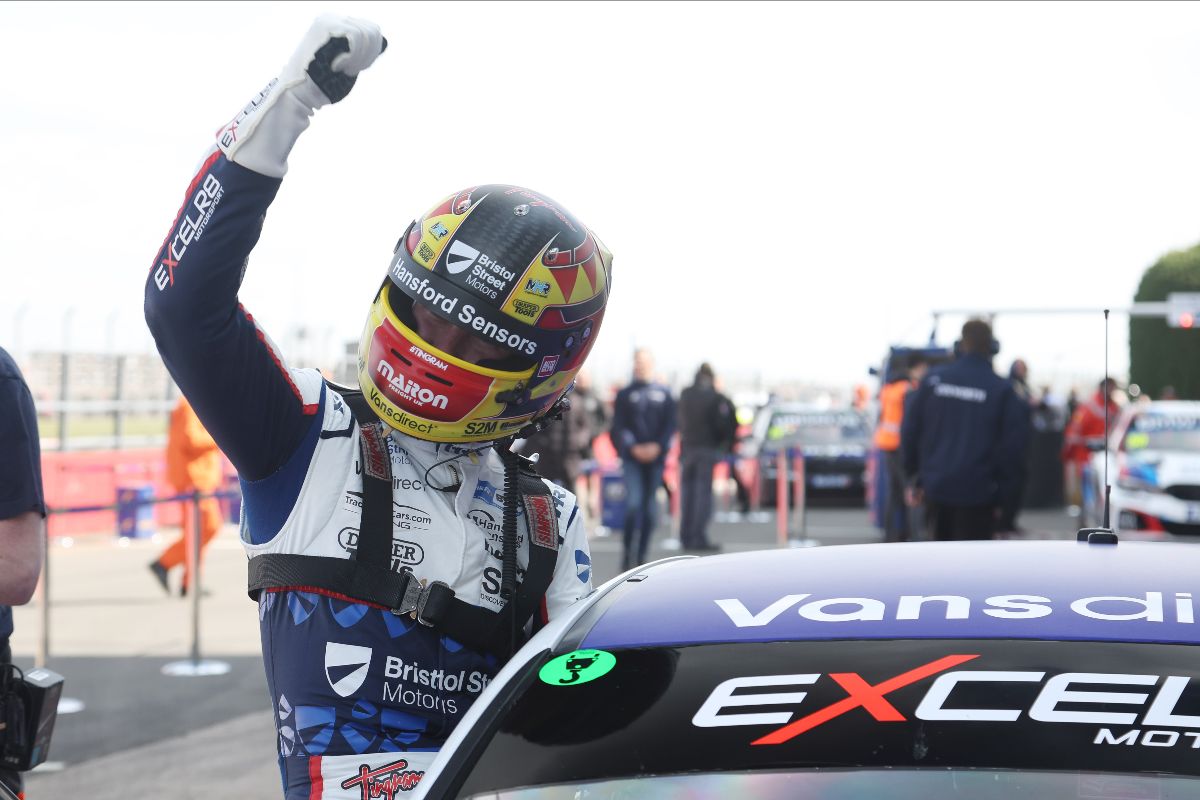 Trio of race winners during action-packed day at Donington Park

Halfords Racing with Cataclean’s Gordon Shedden triumphed in the second contest, whilst ROKiT MB Motorsport’s Jake Hill ended his day on a high with victory in the finale.

Bristol Street Motors with EXCELR8 TradePriceCars.com’s Ingram took his 20th career BTCC victory in the season opener, having got the better of his BMW rivals in the early exchanges.

There was excitement from the off as West Surrey Racing stablemates Hill and Colin Turkington went side-by-side on a number of occasions. The scrapping Bavarian machines attracted a five-car train heading into Coppice for the second time, and with Hill run out wide on the exit of the turn, Ingram eyed his opportunity to dart past both of the front-runners.

Hyundai man Ingram managed to keep the chasing pack – led by Team BMW’s Turkington – at bay as the 28-year-old took the chequered flag in commanding fashion.

Hill was bumped further down the order by NAPA Racing UK’s Ash Sutton and Car Gods with Ciceley Motorsport’s George Gamble, and the pole-sitter would spend much of the remainder making his way back past the duo.

Shedden’s Honda Civic Type R was one of the fastest cars on track as the Scotsman made a number of moves on his way to fourth at the finish. The triple champion was further boosted post-race when he inherited the final place on the podium after Hill’s car was excluded for failing a ride height check.

Shedden’s fortunes improved even further in the second bout as he opened his win account with an impressive performance.

Turkington failed to get away from the front row of the grid, initially allowing pole-sitter Ingram to take a comfortable lead, whilst rookie Gamble continued to impress in second.

Gamble couldn’t hold Shedden back for long, however, as the #52 Honda made the move across the start/finish line on lap four.

A game of cat and mouse ensued, as did the new tactical addition of hybrid power, with both Ingram and Shedden holding on to much of their deployment until the latter stages.

Shedden eventually made his advantage stick as he nipped by Ingram’s Bristol Street Motors with EXCELR8 TradePriceCars.com machine at McLeans on lap ten.

With Ciceley Motorsport team-mate Adam Morgan acting as a rear-gunner, rookie Gamble went on to score a phenomenal podium on his first day of racing in the UK’s premier motorsport series.

Hill then ended his rather topsy-turvy afternoon on a positive note as the BMW racer claimed a lights-to-flag victory in the third race at the famous Leicestershire circuit.

After the earlier exclusion, a fightback drive in the second encounter was rewarded with pole position for the reverse grid finale and the Kent star never looked back as he surged home with a dominant display.

Sutton claimed a lonely second in the #1 Ford Focus as he left behind a frenetic battle for the final place on the podium, which eventually went to Rich Energy BTC Racing’s Josh Cook.

Bristol Street Motors with EXCELR8 TradePriceCars.com’s Dan Lloyd held third for much of the race, but he proved to be the cork in the bottle as a gaggle of cars hunted him down.

Cook had to wait until the penultimate lap to make his move as Lloyd ran wide on the exit of Redgate. The Honda Civic Type R went side-by-side with the Hyundai i30N all the way down the Craner Curves before completing the deal through the Old Hairpin.

The hybrid introduction proved to be a huge success as lap times tumbled throughout the weekend. Thanks to the improved pace, Hill now holds both the qualifying and race lap records around the 1.98-mile circuit.

As the huge crowd watched on, it was Ingram topping the table by seven points from Shedden by day’s end, with Sutton a further four points in arrears.

Morgan is the front-running Independent driver, while his Car Gods with Ciceley Motorsport outfit leads the Independent Teams’.

Bobby Thompson enjoyed a fantastic opening day with a hat-trick of overall points finishes, as the Autobrite Direct with JourneyHero driver jumped into an early Jack Sears Trophy advantage.

Tom Ingram said: “That was a strong race. The pace of it all the way through was fast! At no point could I relax; I had Colin [Turkington] pushing me along, I could see Jake [Hill] then catching onto the back of him. So, at no point did I think ‘it’s okay, I can just bring this one home.’ You were always having to check the mirrors, see how much you’ve got, how much you can take out and deploy with hybrid of course. But I’m so pleased to get that one out the way and to top it off with a win is just perfect.

“[The race] kind of had a little bit more of a dynamic about it in terms of having to think about it. From a drivers’ point of view, we’re earning our money this weekend because it’s busy, there’s a lot going on. So, it’s heavy going. But the racing was fantastic. It’s nice to have an extra thing to think about and tactics to play with. I’m really pleased to get that first one out of the way, it was great to get through it with no problems. The first lap was a bit spicy, but I’m really, really pleased and to get that first win with Bristol Street Motors joining the team is just fantastic.”

Gordon Shedden said: “It wasn’t a lot of fun for me at the start of 2021. But that’s fantastic, a third and a win today is great! Some great racing and the car’s mega at the minute so I’m really, really happy.

“This is the first time that everyone’s had a different level of hybrid available to them, so I’m managing what I want to do and I obviously don’t know what [Ingram is] going to do so it’s a little bit of cat and mouse. You’ve only got to win by an inch haven’t you.

“It’s great, there’s so many competitive cars. It’s just insane what’s happening out there, the level is just mega. So, the fact we’re in the mix is great – that’s just what we want right now. If the rest of the races are like that, it’ll be a lot of fun that’s for sure!”

Jake Hill said: “It was a good race that! It very much resembled my Croft win last year. It was nice to lead Ash [Sutton] as well, it was the other way round a lot last year. Massive credit to the team, my little ‘ROKiT-ship’ was absolutely flying this weekend, so a huge thank you to MB Motorsport, WSR and everyone at BMW for this fantastic result.

“It’s been difficult for us as a team because we’ve been so up and down collectively this weekend. The main thing is that the pace is there, the car’s very good and we’ve definitely got a car that can challenge for the title, which is what it’s all about. We managed to come back all the way from last on the grid at the start of race two and we’re here in the winners’ circle for the last race, which is fantastic.”