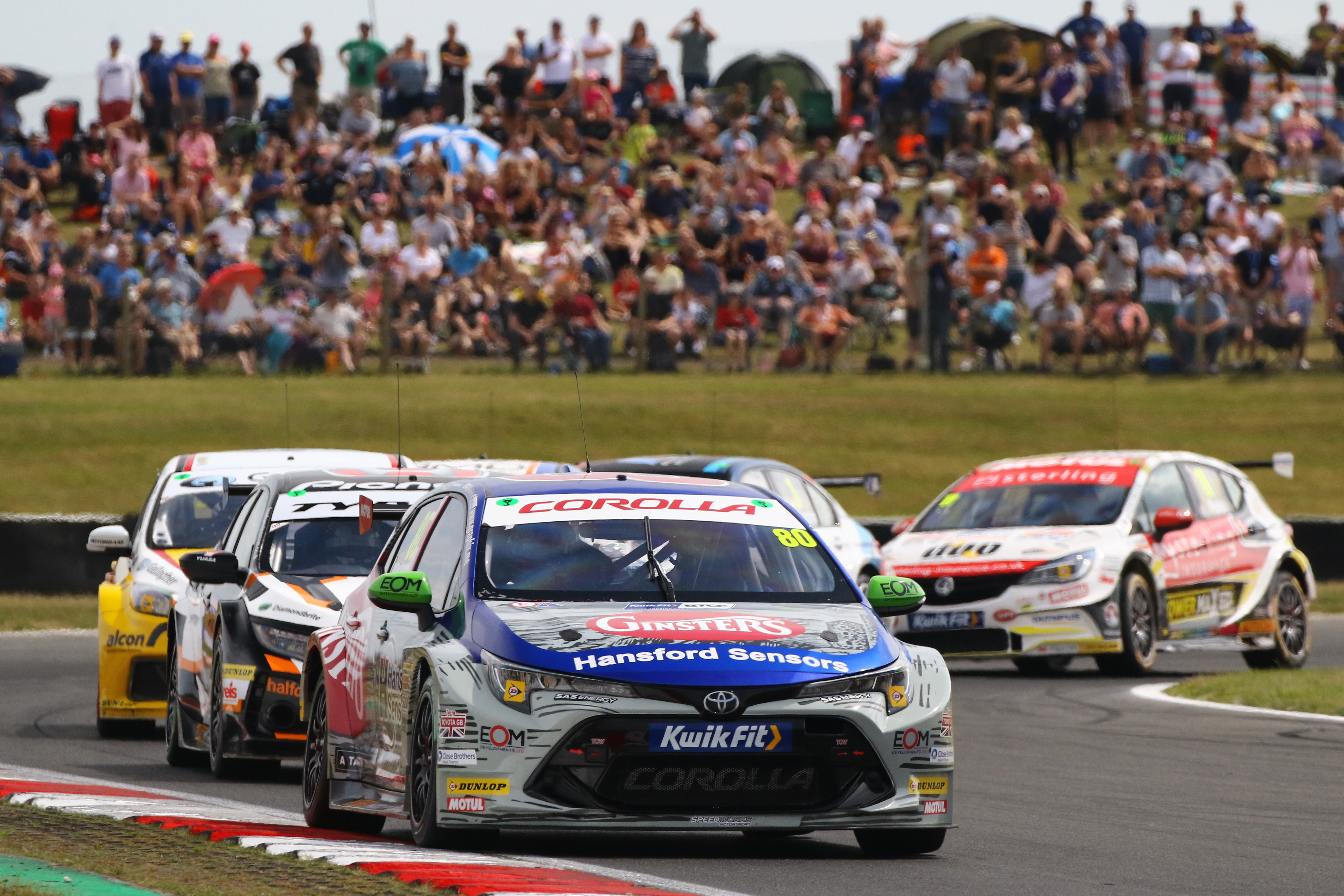 Team Toyota GB with Ginsters’ Ingram sealed a first pole position for the new Corolla during yesterday’s qualifying session, and he duly converted that success into a second race win of the season.

Turkington started his race day with a steady fourth place finish, before nipping by race one winner Ingram to take victory in the second encounter.

Having provided sensational entertainment throughout the weekend, the UK’s premier motorsport series saved the best until last with a final race that will live long in the memory.

Cobra Sport AmD AutoAid/RCIB Insurance’s Butcher eventually won the barnstormer as he benefitted from a breathtaking battle between Jason Plato and Ash Sutton.

A further layer of intrigue was added to the triple-header with the inclusion of all three Dunlop Sport Maxx tyre compounds – hard, medium and soft. Each compound had to be used on race day for the first time in BTCC history, which created exciting racing throughout the field.

The day began with Ingram kicking off the second half of the BTCC season in the best way possible as he produced a dominant display in the opening race.

While Ingram’s first victory of 2019 came in the reversed-grid race at Donington Park, this was the first time the car had been the pace-setter from the outset. The Bucks ace fended off Halfords Yuasa Racing’s Dan Cammish in the early running but last year’s Championship runner-up gradually stretched his legs to win by more than three seconds.

Title-chasing Turkington then came out on top of a five-car battle to win the next race.

It was the tenth victory so far in 2019 for the WSR-run BMWs – a record number achieved by the Surrey outfit in a single season – while a rostrum for stablemate Andrew Jordan meant the team also secured a 200th podium for the WSR/BMW partnership.

Scotsman Butcher then won arguably the race of the season so far as the curtain came down in enthralling style at Snetterton.

Sutton was soon into second and the Adrian Flux Subaru Racing star then immediately closed in on his old team-mate Plato. The pair battled for what seemed like forever, swapping paint several times as the crowd collectively held its breath.

The chasing pack was closing in with myriad changes taking place as the likes of Butcher and Josh Cook had scythed their way through from 12th and 15th on the grid respectively.

The race was building towards an exciting climax when Plato, Sutton and Butcher went three-wide down the back straight and that simply wouldn’t work going into Brundle’s. A heart-stopping moment followed as Butcher carved his way down the inside of both, as Plato ran wide and slid into Sutton’s Subaru. The Levorg was tipped into a spin while Plato also lost ground, and suddenly it was Butcher’s Honda sailing away to take his second win of the season.

BTC Racing duo of Cook and Smiley took a comfortable second and third respectively, with the latter being the only driver to score a podium on the Dunlop Sport Maxx hard tyre today.

At the conclusion of the action, Turkington had extended his advantage at the top of the Drivers’ standings with BMW stable-mate Jordan now 36 points in arrears.

BMW and Team BMW top the Manufacturers’ and Teams’ order, whilst Rory Butcher and his Cobra Sport AmD AutoAid/RCIB Insurance squad leads both Independents’ tables, as well as the Jack Sears Trophy.