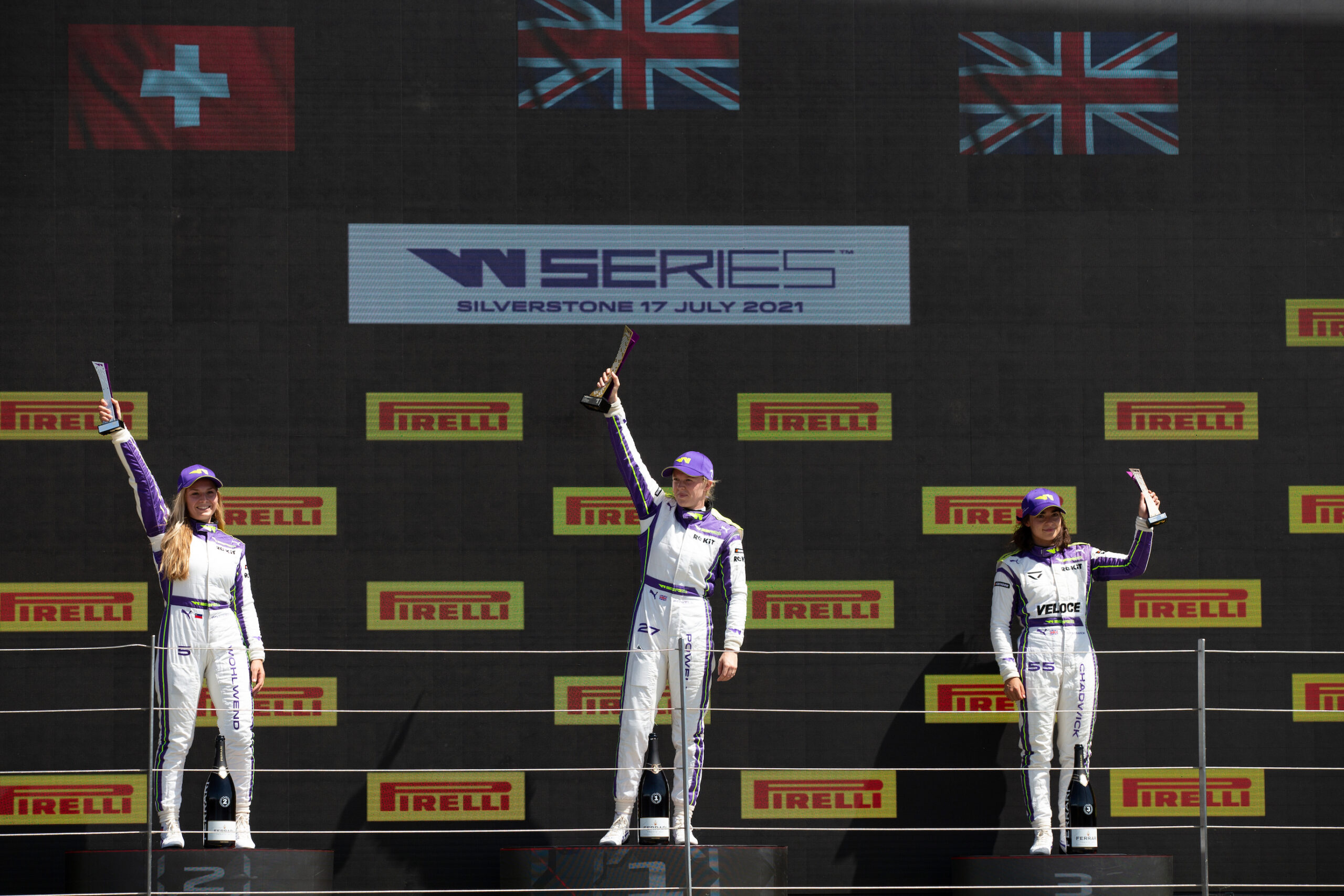 Reigning Champion Jamie Chadwick scored a podium in front of around 100,000 passionate spectators as the Veloce Racing star impressed the crowds at her home W Series event at Silverstone today (17 July).

Veloce Racing team-mate Bruna Tomaselli made solid progress throughout the 30-minute race as the Brazilian crossed the finish line in 12th place, an improvement of three positions over the course of the contest.

Chadwick maintained third position off-the-line as she watched the lead battle between Alice Powell and Fabienne Wohlwend rage on throughout the race. Powell would eventually get the better of long-time leader Wohlwend following a short safety car period, whilst 23-year-old Chadwick powered to a podium and an important 15 championship points.

It was a relatively lonely race for Chadwick, but her consistency proved key, and despite not having the ultimate pace to challenge for victory the 23-year-old ensured that home silverware was secured for Veloce Racing.

Tomaselli also had eyes on a frenetic battle ahead of her during much of the encounter as the rookie carefully picked off those immediately in front. Overtaking proved difficult throughout the order, but Tomaselli performed well to take 12th place around the world-famous 3.66-mile Grand Prix circuit.

Jamie Chadwick, Driver, Veloce Racing said: “It was a quiet race for me in third because we just didn’t have the pace to fight for victory today, but to get a podium in front of these fans is still absolutely fantastic.

“The atmosphere has been incredible here at Silverstone and I’ve never experienced anything like this. Points make prizes, and of course we would have liked to have scored the big points this weekend of all weekends, but it’s a long season and winning the championship is the ultimate goal.”

Bruna Tomaselli, Driver, Veloce Racing: “It was a good race today, but we knew it was going to be difficult after qualifying yesterday and we were unable to make too much progress from our grid position.

“We improved throughout and made up a few positions, but overtaking was quite difficult as the drivers were quite evenly matched in the midfield. I have learnt a lot this weekend and I’m already looking forward to the Hungaroring in two weeks’ time.”

Mariella Bailey, Team Principal, Veloce Racing: “It wasn’t to be today in terms of winning the race, but we can be pleased with a podium at our home event at Silverstone.

“It’s important to score points consistently, particularly on days when you maybe don’t have the pace to win, and that’s exactly what we’ve done. It has been a real honour to lead Jamie, Bruna and Veloce Racing for the first time this weekend, and we’re looking forward to improving further at the next event.”