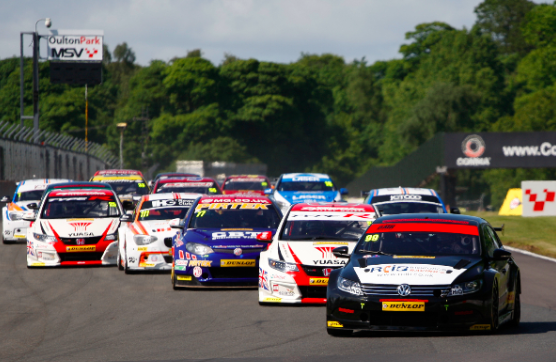 The picturesque Cheshire circuit was basked in glorious sunshine throughout race day as Plato picked up from where he had left off in qualifying on Saturday.

Starting from pole position the VW CC driver ripped off the line in race one and rarely looked back despite Matt Neal’s best efforts in the Honda Civic Type R.

It was actually Team IHG Rewards Club’s Andy Priaulx who made the best getaway and looked like he could wrestle the lead away from Plato as the gaggle of cars roared down to Old Hall for the first time. The Guernseyman seemed solely focussed on Plato ahead, however, leaving the door open for Neal’s Honda Yuasa Racing machine to sneak back past the #111 car on the run down to Cascades.

With the rear-wheel drive BMW 125i M Sport slow to generate heat into its tyres it would take Priaulx almost three laps to find the ultimate pace. From that point he pressured Neal, but the triple BTCC champion kept his cool to defend the place perfectly around the 2.2-mile Island Circuit.

After his commanding race one win Plato produced a similar performance in the second contest, this time with the race-long attention coming from the other Honda of Gordon Shedden. The Type R touched the VW CC on a couple of occasions while tussling for top spot, most notably at the Island Hairpin, but Shedden couldn’t quite make a move stick. The Scotsman made one last attempt on the final corner of the final lap, but would eventually fall short by just 0.093s.

Plato’s victory marked the first time this season that a driver has taken top honours with maximum success ballast on board and was also the 199th podium of his incredible BTCC career.

Jordan’s MG6 continues to rack up the points at an incredibly consistent rate and race two proved no exception. The 2013 BTCC champion kept Plato and Shedden honest throughout to claim another podium for the manufacturer squad, whilst Neal’s Honda followed in the order after seeing off challenges from three BMWs.

West Surrey Racing looked to be staring at three successful results, with the reverse grid race to follow, but the team’s hopes unravelled on the final lap. Rob Collard had initially blasted from eighth on the grid into fourth before the multiple race-winner hounded Neal’s Civic for much of the contest.

His challenge faded late on, however, allowing team-mate Priaulx to drag himself into contention. The triple World Touring Car Champion made an ambitious attempt at the hairpin on the final lap but contact with the rear of Collard’s sister car led to disaster. Broken rear suspension forced out Collard on the spot while Priaulx could only limp home in 15th.

Their pain became Sam Tordoff’s gain as he got the better of both Adam Morgan and Aron Smith to take fifth. It was a great battle from the three young chargers, which included two impressive moves from the JCT600 with GardX-backed car. With little room to manoeuvre he first slipped by Morgan’s Mercedes on the run down to Cascades on lap eight, but the best was to come three tours later when he out-braked the VW CC of Smith at Lodge. Morgan also eyed his own opportunity as he immediately followed Tordoff through, relegating Smith to seventh in the process.

It was an expensive move for Smith as the post-race reverse grid draw provided Morgan with pole for the final race. The Lancastrian won race three at Thruxton last time out and was nicely positioned to repeat the trick in front of his home crowd.

Unfortunately there was heartache for the WIX Racing driver this time around, when he was adjudged to have jump started and he was forced to take a drive through penalty.

Neal inherited the race three lead after he had passed Tordoff on the exit of turn one but the Yorkshireman would fight back later in the bout.

Tordoff reeled Neal in and tucked his car down the inside of the Honda at Lodge before making the move stick at Old Hall on lap nine. One tour later and it was MG Triple Eight’s Jordan who produced a similar move on Neal, although this time the pair touched on a number of occasions before the Honda man eventually succumbed. Neal regained his composure to complete the podium ahead of team-mate Shedden, who had himself fallen into the clutches of Plato.

Colin Turkington collected solid points in sixth in what had been a largely low-key day for the reigning champion. He showed his class in race three with a stellar pass at Lodge, which dropped his Team BMR stablemate Aron Smith down to seventh.

The action at Oulton leaves the championship race tantalisingly poised with Plato leading Shedden by just three points. Neal is a further five points in arrears with Jordan only 13 points off the championship summit. Reigning supremo Turkington dropped to fifth in the standings and will be looking to bounce back at Croft next time out.

Jason Plato said: “I love this place. We had real confidence after our test here, we’ve got the car just where we want it and when you’re in the groove with both the car and the circuit it makes the job a whole lot easier. The gamble this weekend for us was to save the tyre until race three and make the absolute most of the first two. We know we’re quick here, and our plan was totally vindicated, it’s been a fantastic day for us. That said I was pleased with the performance on the soft tyre in the third race too. Pole position and two wins – a good weekend by anyone’s standards!”

Sam Tordoff said: “That means a lot – it’s been a difficult year for me up to now, I expected to be up at the front and challenging sooner than this. I set myself high standards and I want to be challenging to win this championship. This weekend has been a real step change though, and the results really reflect that. We needed an uplift in the team and that one is for them. Matt [Neal] made a slight mistake – I think there was some oil down – and it was the only chance I needed. I ran my own race and was a little concerned about Jordan’s pace towards the end but we had just enough.”

Gordon Shedden said: “It was close in race two, I just wish it had been close the other way around. It’s been good, but not quite where we need to be. We threw a wild set-up at the car for race three and it didn’t quite work out, but that said these points are going to be very valuable as the season goes on. We’re learning all the time and even though the car wasn’t absolutely spot on this weekend we still scored some good results. We can move forward to Croft with big smiles on our faces.”

Matt Neal said: “I just love driving this car! In the first race I didn’t make the best start which gave Jason a bit of a gap, but it was an intense race to the end. I’m disappointed with race three – there must have been some oil down but it felt a bit like a puncture. I wasn’t sure of the grip the next time around either and that’s what let Andrew [Jordan] through. The strength of the Civic Type R is in the high-speed stuff and that’s where the problem was. I don’t like giving them away and we definitely could have won that race. There are positives though, the podium is still a great result and even with weight on, the car is still performing very well.”

Andrew Jordan said: “I gave it everything in the last race, but Sam [Tordoff] was strong in the key areas and I just couldn’t get enough of a run at him. It’s a great result – a bit of a shame not to get the win but I’m going home happy with a really strong weekend under our belts. A third, fourth and second really gives us the boost we needed and it’s a big step forward, but we mustn’t get complacent because we’ve still got some work to regularly be with the front-runners. We have a quicker package now to go with the great consistency we’ve already had this year.”

Welch Motorsport has received a twenty point deduction from the Teams’ and Independent Teams’ championships for having changed a further two engines above the number permitted.