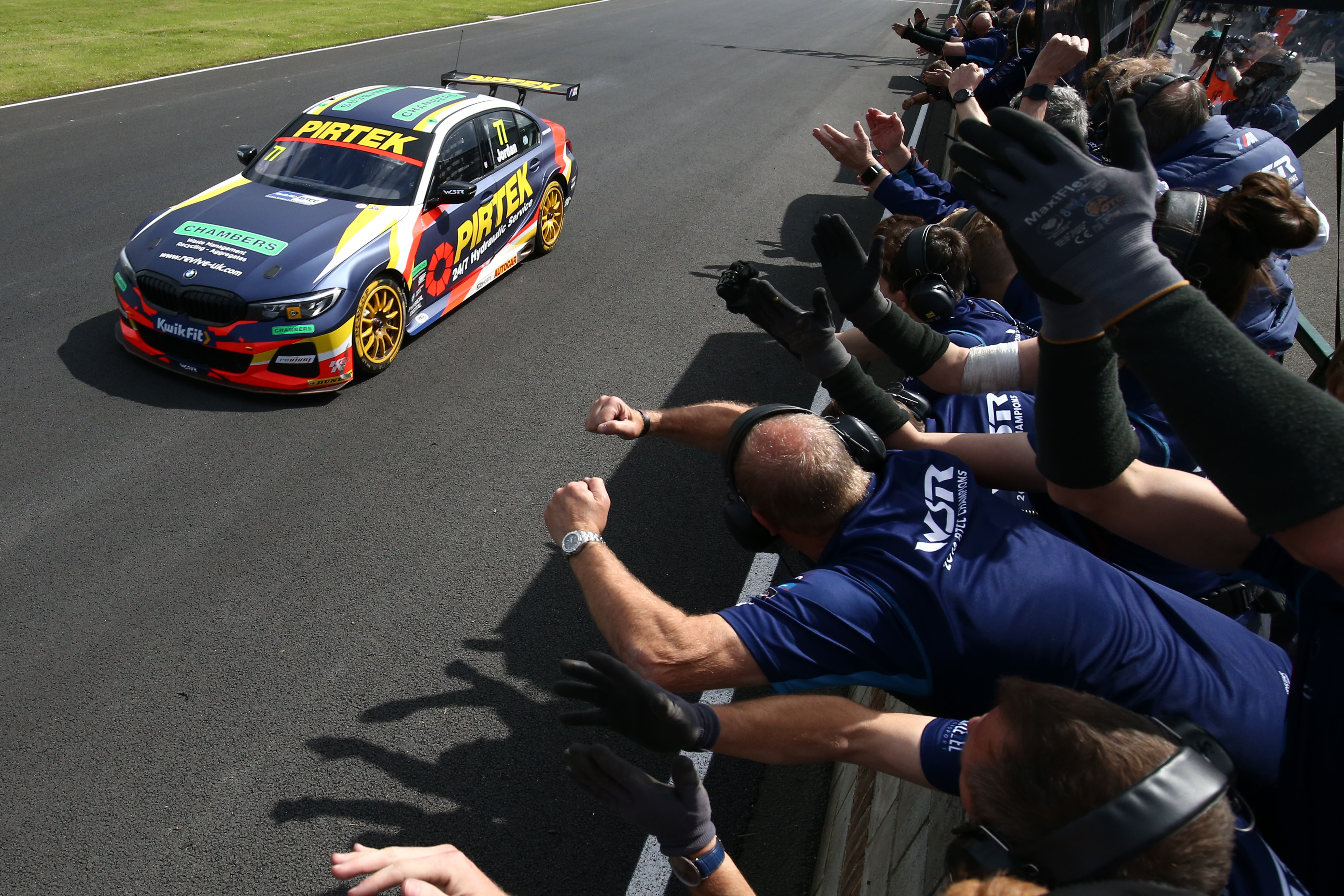 The 30-year-old recorded a win-double for the second consecutive weekend, powering his new BMW 330i M Sport to the top step with assured displays in Rounds 10 and 11.

Reigning champion Colin Turkington, nicknamed the ‘King of Croft’ for his 12 previous wins around the Yorkshire circuit, also enjoyed a stellar weekend as he moved into the outright lead at the top of the Drivers’ standings.

Meanwhile, West Surrey Racing team-mate Tom Oliphant impressed with a feisty drive to fifth in race one, as BMW also moved to the top of the Manufacturers’ Championship.

Jordan kept his cool to top the times in a disjointed qualifying session on Saturday, despite having his fastest lap chalked off for triggering one of five red flags when he suffered a puncture at the Complex.

The BMW star’s second-best time was good enough to secure pole before the rain closed in while Turkington and Oliphant were fourth and fifth respectively, completing a good afternoon’s work for the WSR squad.

Sunday got off to a perfect start for Jordan as he pulled away cleanly from the front row, holding off Chris Smiley into Clervaux before controlling the race from the front to take his fourth win of the season.

Turkington and Oliphant ran line astern from lights to flag to secure fourth and fifth, although the latter kept reigning champion Turkington on his toes with a bold attempt through the Complex late on.

Race two was more of the same for Jordan as he fired his 3 Series off the line before setting about creating a gap to the chasing pack.

The former BTCC champion comfortably pulled away from Smiley despite the extra weight in his BMW, while the BTC Racing driver came under pressure from Turkington who had managed to jump Tom Chilton through the opening few corners.

The Northern Irishman bided his time before making a move, and then demonstrated his pace by bridging a gap of nearly five seconds to close right up behind Jordan at the flag.

Meanwhile, Oliphant enjoyed an excellent getaway but found himself muscled out wide by Dan Cammish through the Chicane and spun to the back of the pack – forcing him to mount a battling recovery drive up to 18th.

The reverse grid draw saw Turkington and Jordan start eighth and ninth respectively, with the duo enjoying a race-long battle with Rory Butcher on their way to another solid points haul.

Both drivers opted for wet tyres on a drying track and the decision ultimately proved correct with Turkington improving up to sixth and Jordan finishing two spots further back.

Oliphant’s gamble on slicks failed to pay off with the WSR man running out of laps to catch the wet-shod runners, eventually bringing his BMW home in 23rd.

Jordan moves up to fourth in the overall standings, just 26 points behind points leader Turkington while Oliphant is currently 13th in the order. BMW are now leading the way in the Manufacturers’ Championship and Team BMW sit second in the Teams’ Championship.