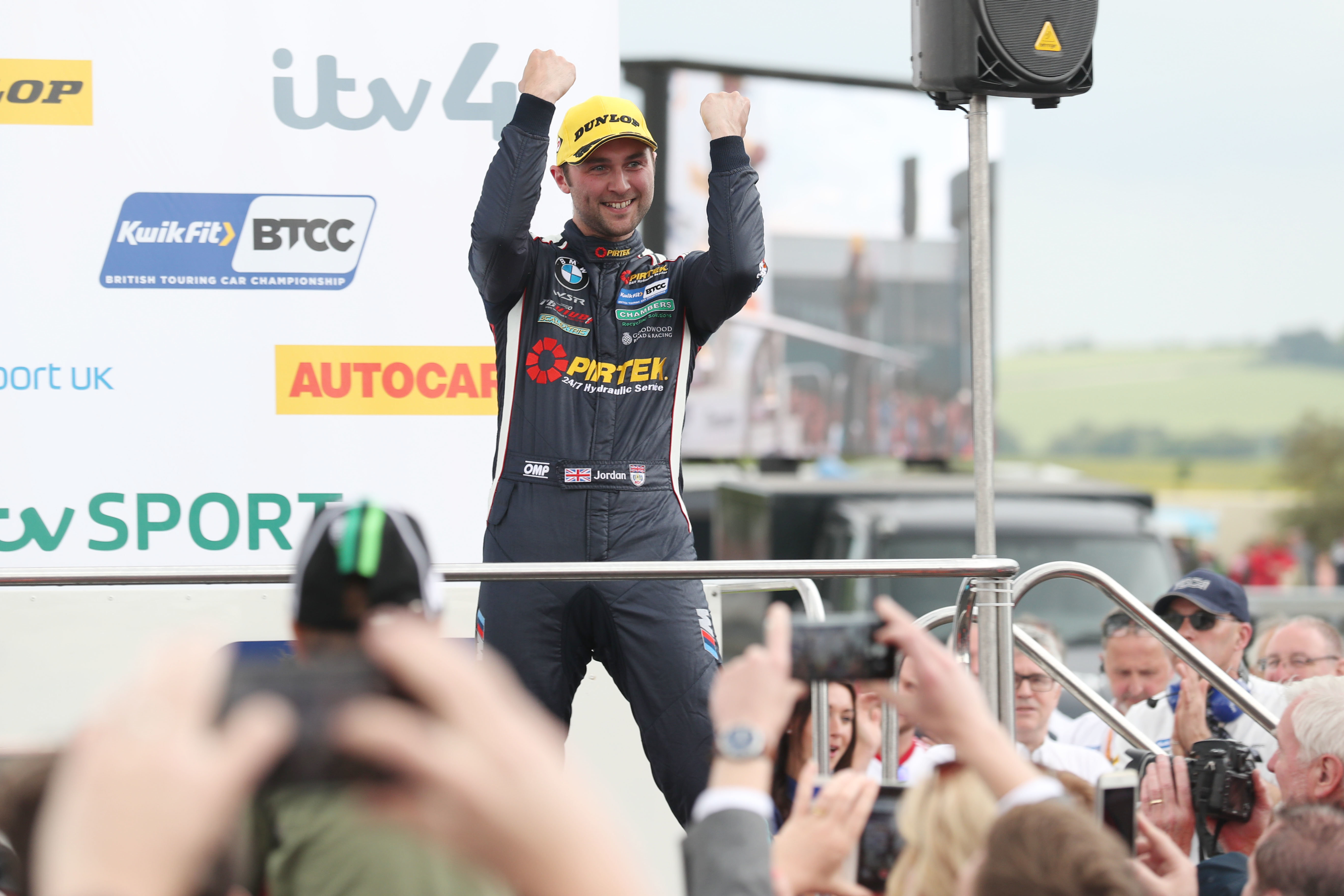 Jordan impressively bounced back from a dismal Donington Park last time out, which saw his car heavily damaged in a multi-car accident. The 29-year-old was forced to sit on the sidelines as his BMW stable-mate Colin Turkington took two wins at the Leicestershire circuit, but this was Jordan’s time to shine at the UK’s fastest track.

The Midlander eventually got the better of pole-sitter Sam Tordoff in the opener after initially blasting his new BMW 3 Series off the line and into second, getting by Halfords Yuasa Racing’s Dan Cammish.

The front-runners held station for almost the entire race until Tordoff’s AmD-run Civic wiggled slightly through Church on lap 13 of 16. Jordan eyed his chance and comfortably slipped by, although it later transpired that Tordoff’s car was suffering from power steering problems.

Jordan eased away in the closing laps to claim his second win of the season, ahead of Tordoff and Cammish.

He won his second race of the day after leading from start to finish.

The 2013 champion made a strong getaway from pole position and never really looked back, despite being kept honest by Turkington in the sister 330i M Sport over the 16-lap encounter. Cammish completed the podium for the second successive time.

BTC Racing’s Cook earned his second BTCC victory of the season following a commanding display in the Thruxton finale.

The Bath racer had to contend with two safety car periods, as well as the race-long attentions of Rory Butcher and Sutton, but he held on brilliantly to keep his title challenge well on track.

Sutton was looking to score his first win of the season and looked racy early on, but he eventually conceded second place through Church as the Cobra Sport AmD AutoAid/RCIB Insurance Honda of Butcher nipped up the inside through one of Britain’s most challenging corners. That eye-catching move also helped the Scotsman to take joint-lead of the overall Drivers’ standings, alongside Turkington, who both sit just two points ahead of Cook – though the Northern Irishman heads the way on races won.

Honda/Halfords Yuasa Racing tops both the Manufacturers’ and Teams’ standings.

Andrew Jordan said: “It was a credit to BMW and WSR because the car was in a sorry state as we all know after Donington Park. That’s how we do it! I love Thruxton, WSR and this new BMW 3 Series. Race two was tricky with the weight in, and in a way it was good that I had Colin behind because the weight hurt the balance of the car. But a BMW 3 Series one-two, the first of the year! I can’t remember when I last had a double. We’re on form. We’re a good team with a good car and good drivers.”

Josh Cook said: “We needed that one. It’s been a tough day today. I executed the start nicely and got past Ash (Sutton) and then just managed it from there. We took a bit of a gamble on setup and it paid off in the end. Our Team Manager Zoe (Timbrell) had to shoot off ill earlier, so that was for her. I’m chuffed for the team – it’s been a hard day.”

Colin Turkington said: “It’s an absolutely fantastic result for the team, and race two was my 400th race as well apparently, so nice to sign that out with a podium. I’m really happy – it looks easy out front but it’s not when the pressure’s on. Really happy for all of Team BMW and especially for Andy’s side – they’ve had a tough few weeks in between Donington and this one so great work from everybody. Plenty of reason to celebrate today.”

Rory Butcher said: “That was a fantastic race day for us. We started fifth all day and we’ve bagged some really good points. It was nice to have such a strong race but I didn’t really have an answer for Josh (Cook) out front in that last one and I had to look in the mirrors back towards Ash (Sutton) a little. Some new brakes on for the final race made the difference and Mike (Bushell, engineer) has done a superb job all weekend.”