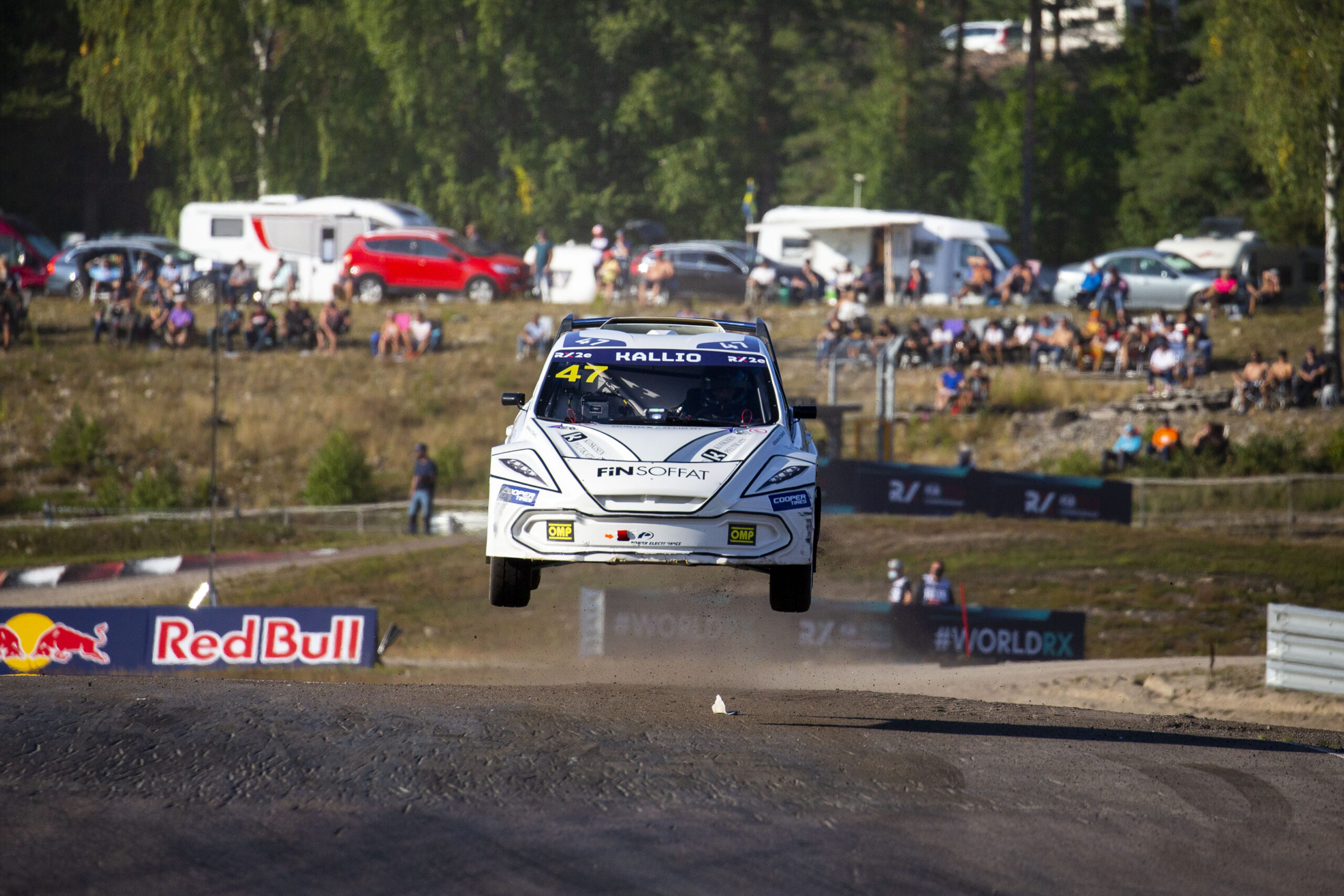 Jesse Kallio emerged triumphant after an enthralling battle with Fraser McConnell as Round 2 of the FIA RX2e Championship at the World RX of Sweden produced scintillating action at Höljes.

The Finnish ace bounced back from a disappointing Saturday to storm into contention with consecutive qualifying session wins before showing blistering pace in both the semi-finals and final to claim the overall spoils.

McConnell was a narrow second after impressing throughout the weekend at the iconic Värmland circuit, while Isak Sjökvist notched third on his RX2e debut after a frenetic final.

Guillaume De Ridder remains top of the Drivers’ Standings after finishing fourth, but the Belgian is just a point ahead of Kallio and two clear of McConnell as the first-ever FIA electric rallycross championship now turns its attention to Lohéac in France for Round 3.

Kallio started the weekend in fine fashion, winning his Q1 race and posting the third-fastest time of the opening session behind McConnell and De Ridder.

However, things unravelled in Q2 as a slow puncture saw him slip down the order while McConnell doubled up – holding off the rapid Swedish duo of Linus Östlund and Nils Andersson to take control at the end of Saturday.

Sat fifth at the halfway stage of qualifying, Kallio had it all to do in order to catch McConnell but a blistering display in Q3 produced the fastest time of the weekend so far and set the 22-year-old on the comeback trail.

He backed that up with a dominant Q4 win, getting the holeshot and putting the hammer down to cover an early joker from McConnell – although victory was still not enough to prevent the Jamaican from claiming Top Qualifier honours.

While Kallio and McConnell were pushing the pace at the front, standings leader De Ridder was having a tougher time after a dream clean sweep in Barcelona and could only manage fourth in the intermediate standings following damage and a puncture on a frustrating Sunday.

McConnell laid down a marker in the opening semi-final, taking victory ahead of Östlund and the ever-entertaining Patrick O’Donovan after Andersson suffered a mechanical failure which dashed his hopes of a home victory.

Kallio responded to McConnell in his semi-final, leading from turn one to the flag while De Ridder took second and Sjökvist booked his spot in the final with third – making the most of a half-spin from rapid EKS JC youngster Isak Reiersen on the opening lap.

That put the two old RX2 rivals on the front row for the final, and it was Kallio who reached turn one first while pole-sitter McConnell slotted in behind and De Ridder headed for the joker.

Östlund followed suit on the next tour but couldn’t leapfrog the Belgian, while a combative O’Donovan was snapping at McConnell’s heels before taking his own compulsory joker.

Kallio continued to stretch his lead at the head of the pack and, while McConnell and Sjökvist both went for an alternative joker strategy, there was no stopping the Finn as he pumped in consistency rapid lap times to secure his first win in the pioneering new RX2e category.

McConnell and Sjökvist, who showed consistent improvement throughout the weekend as he continues to adapt in his maiden season of rallycross competition, completed the rostrum while De Ridder suffered a late puncture but still finished fourth and Östlund came out on top in a robust final-lap battle with O’Donovan.

It was a frustrating day for the local driver, who posted the third-quickest times in both Q2 and Q3, and fellow new-boys Andersson and Reiersen were also left thinking what might have been after their semi-final misfortunes.

Damien Meunier will be desperate for another chance to realise his potential after the pacy Frenchman produced a competitive display on an unfamiliar circuit, while it was a similar story for Pablo Suárez as the popular Spaniard lodged improving times with every session around Höljes – having never raced at the legendary venue before.

A haul of 29 points for Kallio leaves him just one behind Drivers’ Standings leader De Ridder ahead of Round 3, while McConnell’s 27 puts him a solitary point further back. O’Donovan moves into fourth after another strong display while Suárez and Meunier complete the top six in the table.

Jesse Kallio said: “Today has been a perfect day. Yesterday wasn’t so good, but today has been brilliant. It is so tight when everyone is in the same cars. The driver makes all the difference, and that makes it really enjoyable. I am trying to find the budget to do more races, as I am hungry for more success.”

Fraser McConnell said: “It’s all down to the drivers in these cars, and I think Jesse figured out the launch settings just a little bit better than me all weekend! That’s what it all comes down to, because the driving is so spot on from everyone.

“Jesse has done a really great job and should be really proud of his driving. I tried to put him under pressure as much as I could, and the championship standings are really tight now. I hope sponsors can see the value of a championship with such great drivers.”

Isak Sjoökvist said: “It’s been a really tough weekend with such great drivers who are all really fast. It feels really great to be up on the podium, and I couldn’t have imagined that at the beginning of the week.

“These electric cars are absolute fire. It’s been hard at times to adapt my driving style but I have enjoyed the learning curve. I have tried every solution to find extra speed, and this is a huge result for me.”

The FIA RX2e Championship continues with Round 3 at Lohéac, France next month (September 3-5). You can watch every single race live on RX+, the new FIA World Rallycross Championship broadcast platform.