‘KING OF CROFT’ LEADS THE WAY AS BTCC HEADS TO YORKSHIRE 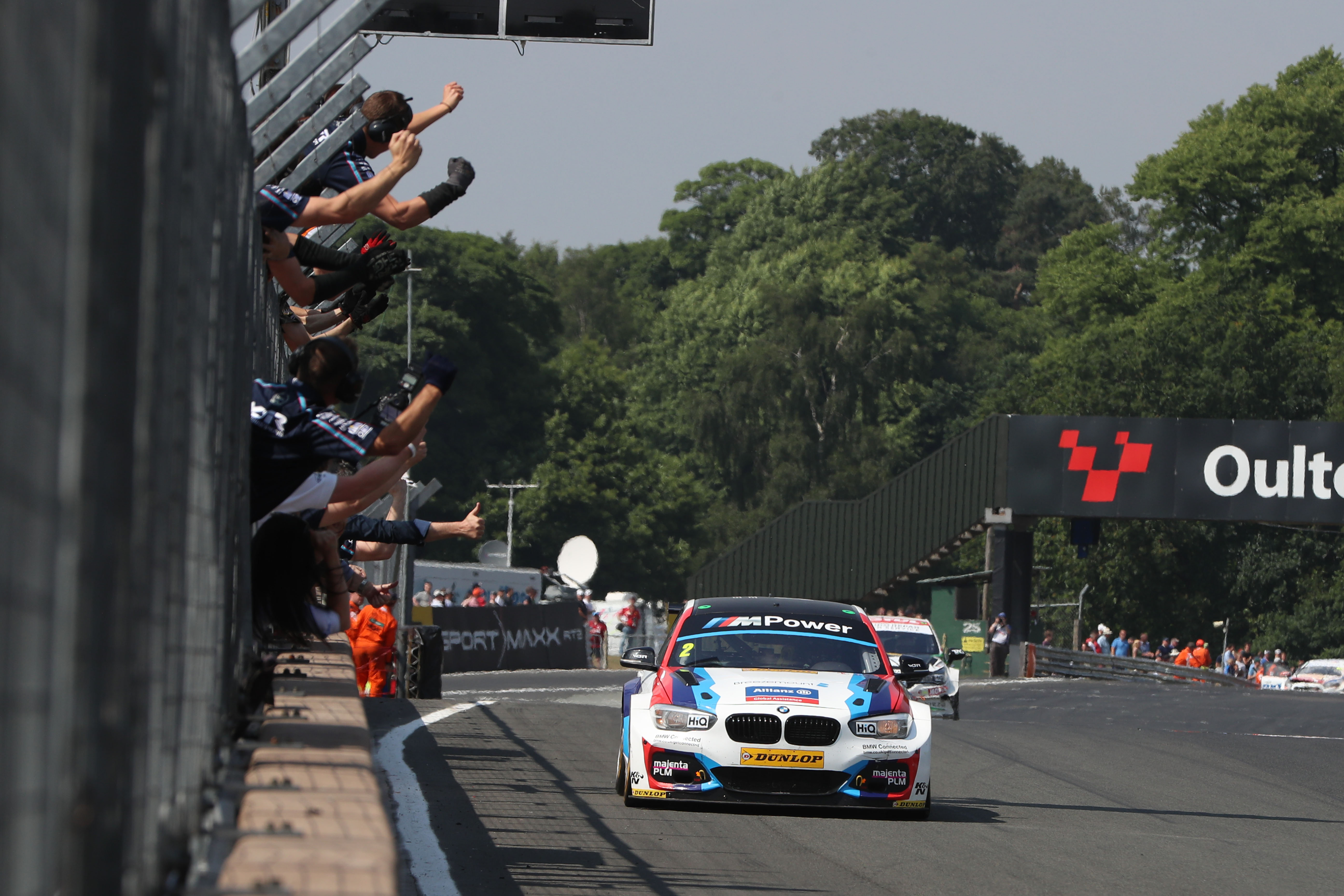 The Dunlop MSA British Touring Car Championship hits the half-way point of its 60th anniversary year next weekend (23/24 June) at Croft Circuit, with ‘King of Croft’ Colin Turkington leading the charge and four Yorkshireman ready to battle for honours on home soil.

Last weekend at Cheshire’s Oulton Park, three different drivers took to the top step of the rostrum – including a maiden BTCC victory for Matt Simpson in the opener. Team BMW pair Colin Turkington and Rob Collard wrapped up Rounds 11 and 12 between them, with the latter round also a 1-2-3 finish for the West Surrey Racing-run BMW trio – quite the achievement in one of the most competitive motor racing series’ around, which has so far seen nine different drivers take home the laurels this season.

Turkington’s race two victory and weekend points haul saw him leap up the Drivers’ standings and into pole position heading to Croft – a circuit which has been a favourite of the double champion throughout his career in Britain’s top flight.

Croft, celebrating 50 years since it first held a BTCC meeting, is a circuit that naturally favours rear-wheel drive machinery and the Northern Irishman will be among the favourites as he looks to double down on his points lead heading into the traditional summer break. Turkington has garnered the most victories, podiums and fastest laps there in the last 20 years – 12, 19 and 8 respectively. Little wonder he’s earned that ‘King of Croft’ moniker.

Hot on Turkington’s heels are Adam Morgan, Jack Goff, Tom Ingram and Josh Cook. The championship’s next generation have been showing the way and will hope to sustain their charge into the mid-season hiatus.

A strong crowd is expected to descend on the charming, charismatic and challenging Croft Circuit to enjoy the mid-June sun and all the action is broadcast live and free-to-air by the BTCC’s longstanding partner ITV, on ITV4 the ITV Hub and online at itv.com/btcc.

The Four Yorkshiremen
Four of the 32 drivers on the BTCC grid are proud Yorkshiremen – a larger representation than from any other county. It’s somewhat of a hotbed then for touring car talent, and each would count themselves as potential race winners heading into next weekend.

Honda rookie Dan Cammish is new to the series this year, and is best placed of the home quartet in the standings so far, with a brace of podiums to his name. The Leeds-born racer is adapting nicely to the cut and thrust of one of the world’s most fiercely competitive tin-top challenges, having made a name for himself in Porsche Carrera Cup GB as a two-time champion.

“Racing a touring car around Croft is something I’ve been looking forward to for a long time,” said Cammish. “It’s great to finally be in the main show! I’ve driven round Croft a lot – it’s a fast circuit where you really get a sense of speed, and I’ve gone well there in the past – but I’ve never driven the Honda there before. Hopefully we can do a good job for the home crowd, and I see no reason why we can’t pick up some very solid points.

“Being in Yorkshire, I’m sure I’ll have a fair few supporters and I’m really looking forward to it. There’s definitely a bit of home advantage, and you do get a real kick out of knowing the crowd’s behind you – the Croft paddock is always a great place to be.”

Hot on Cammish’s heels in the points tally are Vauxhall man Senna Proctor from Driffield and Bradford’s Sam Tordoff – returning to the championship this year with Motorbase Performance. It’s the former’s second campaign in the BTCC, having made the step up from the Renault UK Clio Cup in 2017, and this year, he claimed a breakthrough victory in a dramatic weather-affected race at Brands Hatch.

“I’m looking forward to going to Croft,” said Proctor. “I love the circuit and always receive a lot of home support there, and there’s no reason why we shouldn’t be fighting up at the front. It’s a real drivers’ circuit; you’ve got to push flat-out through the first two sectors and just hold your breath, before refining it all for the last sector. There’s obviously a bit more pressure than usual going to my home race meeting, but nothing I can’t handle and I’m feeling more confident than ever and working harder than ever to keep this dream going and keep the results coming.”

Tordoff, meanwhile, has endured a tough 2018 to-date, through little fault of his own. Come race-day he has been caught up in contact on more than one occasion and, alongside some technical issues, he’s been unable to take advantage of what is by far the best qualifying record of anybody in the field. He seemingly has the pace, he now just needs the breaks.

“I’ve got fond memories of Croft,” added Tordoff. “Last time I was there with BMW, we had a fabulous set of results. It’s always great when you finish on the podium at your home event, and I’m hoping to do so again this year in the Focus RS. I really think we can be up at the front. We’ve been blighted by bad luck so far this season but it’s slowly coming round our way, and in terms of one-lap qualifying pace, we are as quick as anybody. The local support always helps, and with a lot of family coming, it just feels like home.”

“I love going to Croft,” he said. “It’s my home track and I always get a warm welcome there. It’s where I made my BTCC debut back in 2010, and then to qualify on the front row two years ago was really special. It’s great to be back and with such a potent package as the Honda Civic Type R and no ballast on-board, I’m confident of being able to challenge right up at the sharp end again.”

Timetable and tickets
All three BTCC races on Sunday, 24 June alongside the rest of the day’s action will be broadcast live and in high-definition on ITV4, via the ITV Hub and streamed live at itv.com/btcc. Those in attendance at the circuit can stay in touch with the commentary and live timing from every session, available at btcc.net/live throughout the weekend.

The support series’ on the TOCA package are also guaranteed to thrill with a double digit total of races set to entertain the crowds. The Renault UK Clio Cup, F4 British Championship and two Ginetta series’ will all be in attendance in North Yorkshire, making for a packed weekend of truly unmissable racing.

Tickets can be purchased at discounted advanced prices at £15 on Saturday 23 June and £30 on Sunday 24 June, or £38 for the full weekend. Accompanied children aged 15 and under are admitted free. Pre-orders can be made online at www.croftcircuit.co.uk/racing/btcc or over the phone (01325 721815) up to and including Tuesday, 19 June. After this date, tickets can still be purchased on the gate.

More information on all of Croft’s driving experiences and racing events can be found at www.croftcircuit.co.uk.