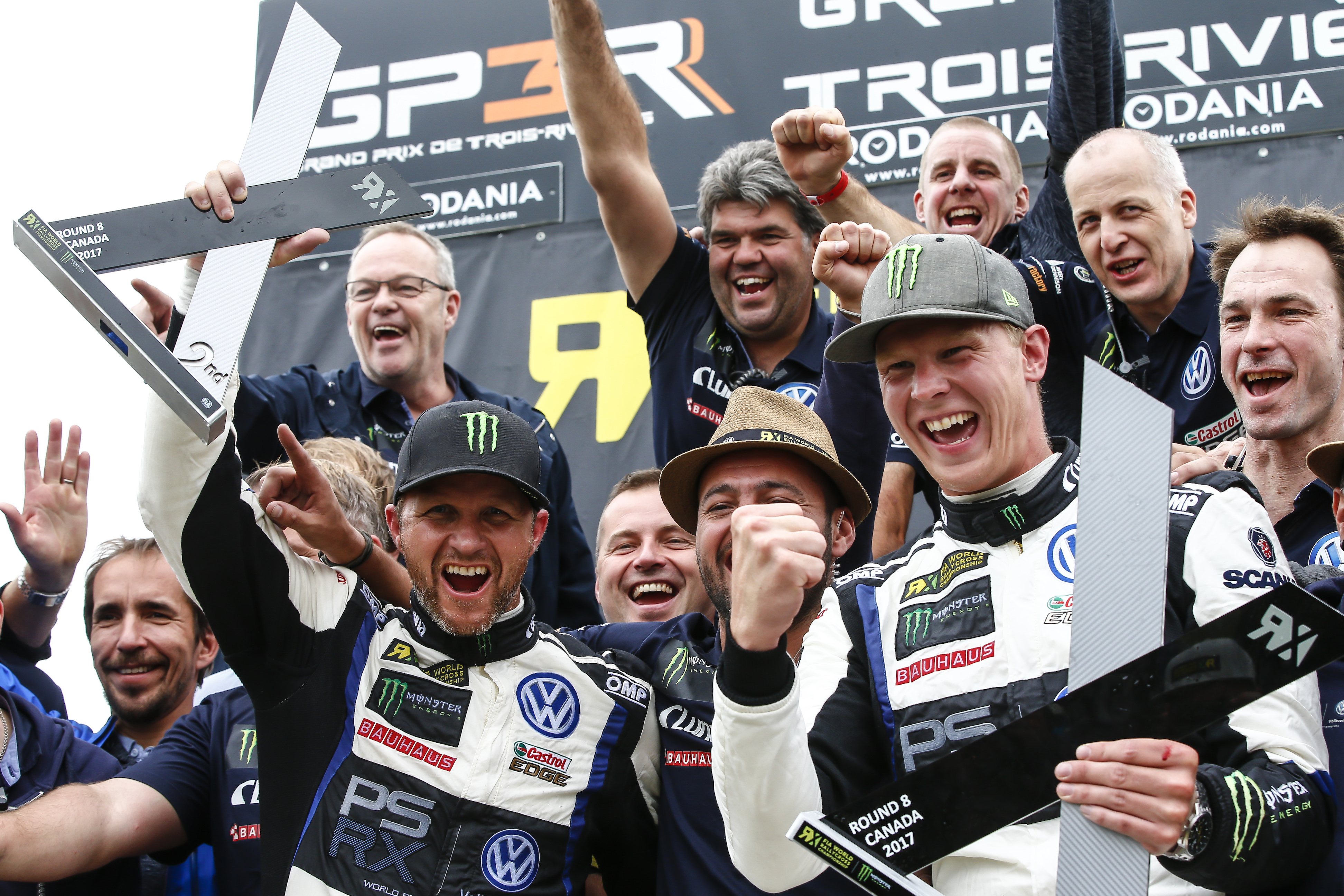 Kristoffersson took his fifth event win – and ninth podium – in a row at the Neste World RX of Latvia in Riga this weekend extending his commanding lead at the top of the driver standings to 62 points [60 points remain over the final two events of the season]. PSRX Volkswagen Sweden also leave Latvia with a 112-point advantage in the teams’ championship – a big enough gap over Team Peugeot-Hansen to guarantee VW the team trophy.

Meanwhile, Kristoffersson’s team-mate Petter Solberg was involved in a collision on turn one of today’s second semi-final which saw the race red-flagged. The Norwegian was taken to hospital for precautionary checks where x-rays later revealed that Solberg had broken his collarbone.

EKS driver Mattias Ekstrom finished runner-up at today’s race in Latvia, while Team Peugeot-Hansen’s Sebastien Loeb rounded out the podium.  In the final round of the FIA European Rallycross Championship for Supercars, it was Anton Marklund in his Volkswagen Polo who was crowned the 2017 Euro RX Champion after finishing the five-round season 28 points ahead of runner-up Thomas Bryntesson in his Ford Fiesta. Tamas Pal Kiss [Peugeot 208] ends the year in third place. Robin Larsson finished second in Euro RX today at the wheel of his Audi A1 and is fourth in the end-of-year standings.

“This feels fantastic and to win five races in a row is just amazing,” beamed 28-year-old Kristoffersson – only the third ever World RX Champion [after Solberg in 2014/2015 and Ekstrom in 2016]. This is something that I’ve been working towards since 2013 and I think it will take a lot time to sink in.”

Kristoffersson credited his team-mate [Solberg], his father [Tommy] and the PSRX Volkswagen Team for his victory. The Swede took up the story: “I followed my father when he was racing – he has been to almost every race with me since and we have always worked well as a family team. PSRX VW Sweden is a similar family set-up with Petter and Pernilla at the helm and so we fitted in perfectly there.  Petter is an excellent team-mate – we are both nerds in that we look into every detail.  We put pressure each other and I took advantage of his excellent knowledge. He really let me in and I want to thank him and the rest of our team for all of their help.”

On winning the title, Kristoffersson concluded: “I wasn’t prepared to become World Champion this weekend – and I didn’t really think about it until Petter didn’t make the final. It was only then that I thought it could be possible. I am such a competitive person and I always wanted to become World Champion, it is a dream come true. I can’t thank everyone enough for this incredible moment.”

Runner-up Ekstrom was first to congratulate the new World RX Champion. “I always think the best man deserves to win and Johan has proved that he is the best driver on the track this year,” admitted the 2016 World RX Champion and two-time DTM Champion.

Ekstrom added: “I’ve known Johan since he was really small – I have a lot of respect for him and I can see that much of Johan’s fighting spirit comes from his dad, Tommy.  I didn’t really feel that that I could give them a hard battle for the win here.  Now we will just try to continue the battle with Sebastien [Loeb] to see who can finish second or third in the drivers’ championship [15 points currently separate Solberg, Ekstrom and Loeb in the standings]. As for this weekend, we had four Audis in the semi-finals, which was fantastic.  Topi [Heikkien] was unlucky in the semi-finals but all in all we had a very strong weekend.”

Frenchman Loeb celebrated today with his fifth consecutive podium in RX.  The nine-time WRC Champion commented: “We struggled a bit yesterday but then found the right set-up overnight and finished qualifying with a win in Q4 after some incredible speed.  Today was a great day and again I am on the podium, which is a great feeling.  Well done to Johan – he really deserves the World Championship title – he has had a great season with no mistakes so congratulations to him.”

Latvian World RX star Reinis Nitiss [EKS] made the semi-finals in front of his passionate home fans but failed to make it through to the final race after losing time behind Timmy Hansen who was slowed due to a rear-left puncture. Overnight leader Topi Heikkinen suffered a broken driveshaft in the semi-finals, dashing the Finn’s hopes of a spot in the final. Elsewhere, the Austrian MJP Racing squad did a heroic job of repairing Timo Scheider’s car overnight after the Ford Fiesta caught fire during Saturday’s Q1.

The penultimate round of the FIA European Rallycross Championship for Super1600 saw Hungary’s Krisztian Szabo take the win in his Skoda Fabia.  Rokas Baciuska and Jussi-Petteri Leppihalme finished second and third respectively. Home hero Artis Baumanis finished second in semi-final one but a throttle problem with his Skoda Fabia meant he was unable to start the final.  Szabo now leads Baumanis in the S1600 standings by 12 points.

World RX Managing Director for IMG, Paul Bellamy, concluded: “Once again, RA Events and the Neste World RX of Latvia team have executed a fantastic event.  We’ve had many dignitaries and VIPs at our event over the weekend including the FIA President Jean Todt, Maris Kucinskis, the Prime Minister of Latvia and Nils Usakovs – the Mayor of Riga.  We were delighted to have all three present the World RX, Euro RX Supercar and Super1600 trophies.  Huge congratulations to Johan Kristoffersson and PSRX Volkswagen Sweden who have won both the driver and teams’ titles this weekend.  Johan has been faultless this season and has a very mature head on his shoulders – he thoroughly deserves to be our new World Champion. Well done also to Anton who has won the Euro RX title which has proved to be incredibly competitive throughout the season with the category often fully subscribed. My thoughts are with Petter after his incident in the semi-finals and on behalf of the World RX community, we wish him a very speedy recovery. Now we look forward to the final two rounds of the season – Germany and South Africa – where the fight for second, third and fourth place in this year’s drivers’ championship remains extremely close.”

The penultimate round of the 2017 World RX Championship will move to Germany in two weeks’ time as the FIA-sanctioned series prepares for more rallycross action at the Estering.  Germany RX will also mark the final round of the S1600 Championship.