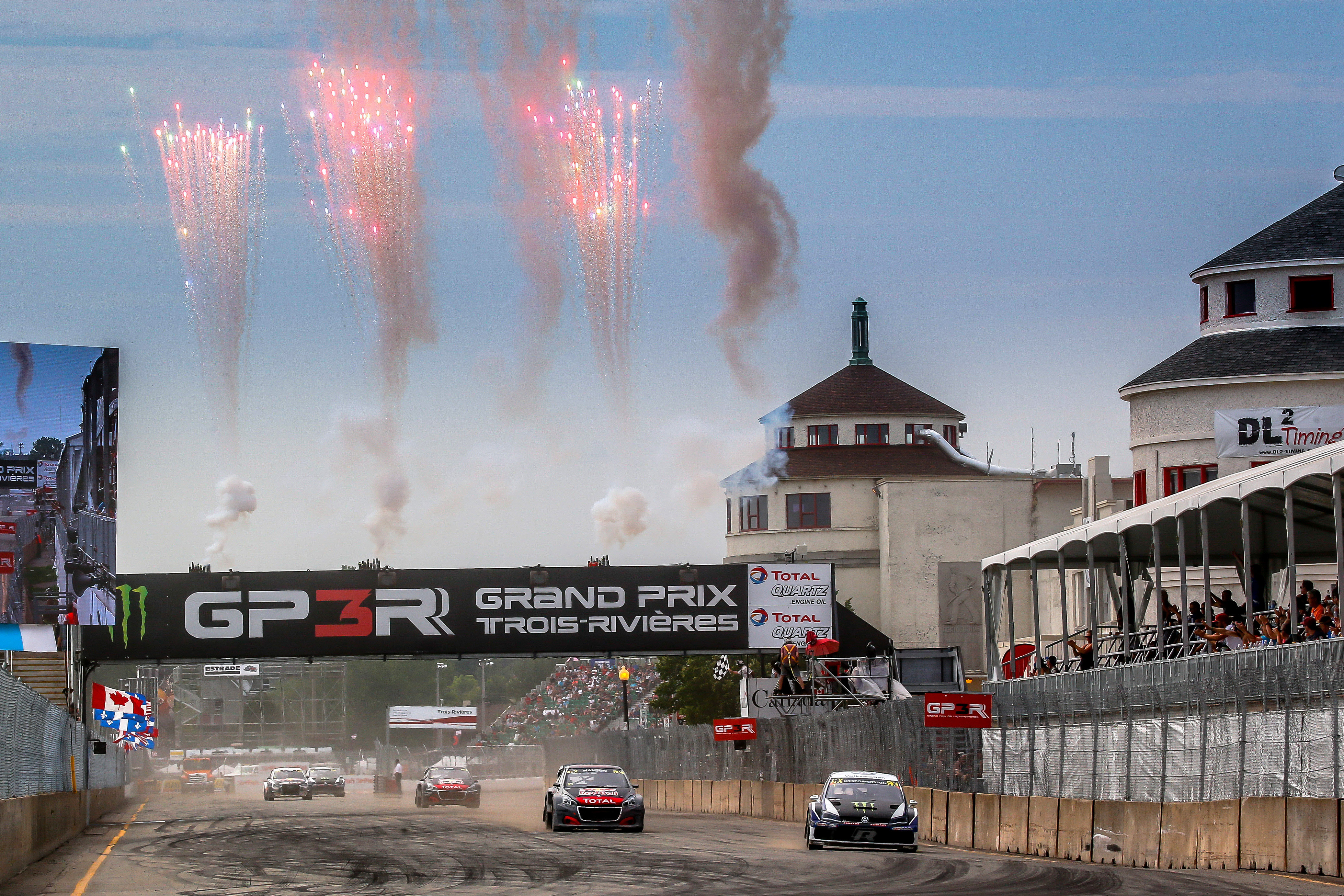 PSRX Volkswagen Sweden’s Johan Kristoffersson stormed to victory in round seven of the FIA World Rallycross Championship presented by Monster Energy in the World RX of Canada.

The World RX Drivers’ Championship leader was the comeback king in the first visit of the season to North America, fighting back from two difficult qualifiers on Saturday to take maximum points by being top in the Intermediate Classification, winning semi-final one and the final in his Volkswagen Polo R.

Team Peugeot Total’s Timmy Hansen joined Kristoffersson on the front row of the grid for the final and finished second, in front of team mate Sebastien Loeb in a double-podium for the French team. Kristoffersson’s PSRX team mate Petter Solberg started on the third row of the grid for the final next to Loeb and finished the race fourth in front of EKS Audi Sport’s Mattias Ekstrom. Team STARD driver Janis Baumanis made his first final of the season and secured the Monster Energy Supercharge Award for having the fastest reaction time at the start of the final in his Ford Fiesta Supercar.

Kristoffersson and the PSRX team extended their leads in the Drivers’ and Teams’ Championships respectively. “I had a very poor Saturday, I really had to dig deep for this victory. I had some traffic in Q1 and again in Q2. This morning I tried to find the rhythm but couldn’t – I wasn’t really feeling comfortable in the car on the gravel section in warm-up, so big thanks to the team and Petter who helped me so I was able to focus on the driving and compare myself against Petter on the gravel section,” said Kristoffersson. “I had a good launch in the semi-final but I didn’t have the greatest launch in the final, but Timmy didn’t either. From there on I had quite a clear gap from lap one. Peugeot were really threatening us this weekend so I need as many points as I can. It’s nice to take another victory here in Trois-Rivieres.”

Hansen’s second podium finish of the season moved him into second in the World RX Drivers’ Championship, tied on points with Loeb. “I must say I was much more comfortable in the new Peugeot 208 this weekend than in Sweden, so I was able to push from the beginning. The semi-final was just crazy, Bakkerud managing to take the start from the second row was not in our plan but I took the joker in the right moment to win it. In the final I managed to get out second behind Johan,” said Hansen. “I had a big moment on lap one and I wanted to play it safe after that because it’s been a while since I was on the podium. We have a lot of work still to do and it’s going to keep going forward from here. It’s been a good weekend and I’m happy to share the podium with Sebastien.”

France’s Loeb was overnight TQ (top qualifier) on Saturday but had a more challenging time on Sunday. “For me it was an up and down weekend, like often in rallycross. Yesterday was a perfect day, I won Q1 and Q2 with a good rhythm and the car was perfect,” he explained. “Today was not as good. I had contact with Ekstrom in Q3 and ended second overall. I didn’t have a very good start in the semi-final and then in the last corner I made a mistake. To start on the last row of the final and to finish on the podium is not too bad. I’m happy to share the podium with Timmy for Peugeot.”

Sweden’s Oliver Eriksson won the fifth round of the 2018 RX2 International Series presented by Cooper Tires from Belgium’s Guillaume De Ridder and America’s Cole Keatts. America’s Conner Martell challenged for victory in the final but crashed out while trying to overtake Eriksson for the lead.

In ARX2, the single-make support category to Americas Rallycross, Martell won both rounds in a double-header weekend to extend his points lead. Christian Brooks and Travis PeCoy completed the podium in round two on Saturday. The top two repeated their results in round three on Sunday as Alex Keyes made the podium.

James Taylor, Vice President, Rallycross, IMG, concluded: “This season marked the fifth year that World Rallycross has visited Trois-Rivieres and once again the visit didn’t disappoint. The event was blessed with fantastic weather and some brilliant action on track. Congratulations to Johan and the PSRX Volkswagen Sweden team on another impressive victory, they really had to work for it this weekend. Team Peugeot Total and EKS Audi Sport challenged right at the front and it’s going to be a fascinating battle in the remaining rounds of the season, starting at Loheac in France in September.”

Proud to be a part of #GirlsOnTrackUK at Epsom college where Jamie Chadwick and Dan Bailey attended with @Veloce_Racing #WomenInMotorsport twitter.com/GirlsOnTrackUK…