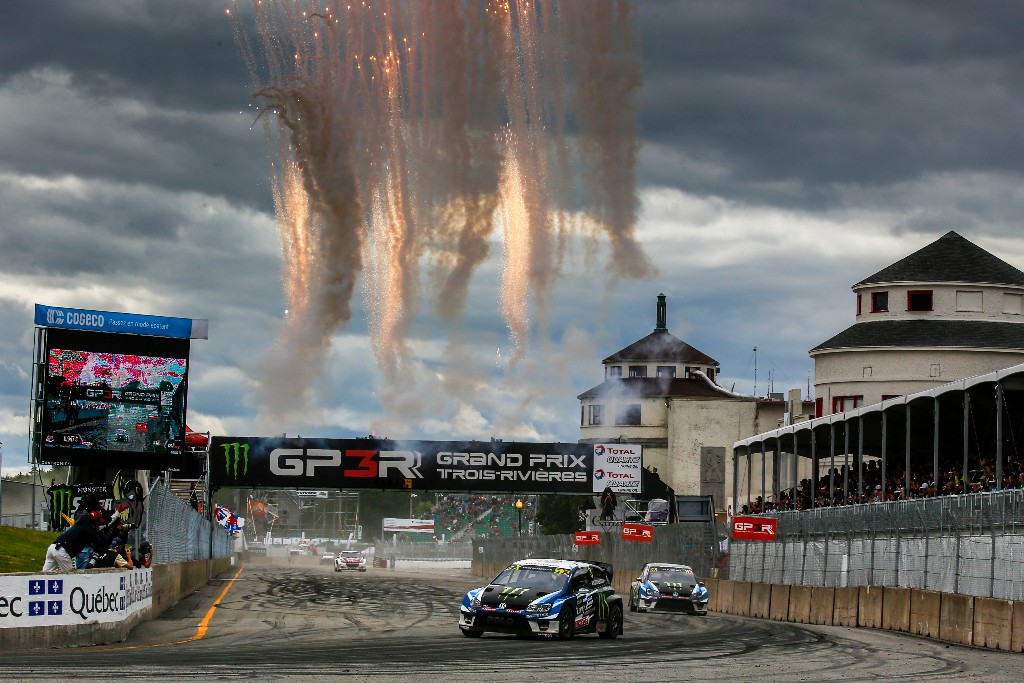 Sweden’s Johan Kristoffersson has produced another dominant display in the FIA World Rallycross Championship presented by Monster Energy after winning today’s World RX of Canada, round eight of the World Championship.  The victory is Kristoffersson’s third event win in a row – and fourth of the season – and has seen the Swede extend his lead at the top of the driver standings by 35 points.  It is also the first time in World RX history that a driver has finished on the podium in seven consecutive events.

Two-time World RX Champion Petter Solberg finished runner-up, making it a one-two for PSRX Volkswagen Sweden this weekend. Team Peugeot-Hansen’s Sebastien Loeb took the third podium spot.  EKS driver Topi Heikkinen is the only driver to have reached every Canadian final since it was introduced to the World Championship in 2014.  He was awarded the Monster Energy Super Charge Award following his rapid launch on the start of today’s final but was denied a podium spot due to a slow puncture.

Canada RX winner Kristoffersson credited his team in the end of event press conference. “This win is definitely a team effort, they really deserve it as they work so hard.  We had very tricky conditions and yesterday was so wet – for the team to deliver a car that is both consistent with the launches and out on the track is a huge credit to the them. Obviously I’d love to make the podium on every event this year but I don’t like to take risks – the biggest and most important trophy is the one at the end of the year so I need to focus on that. I’m very happy to take 30 points this weekend and I will continue to try to do so but without taking risks.”

Runner-up Solberg added: “The weekend has been very good – both of us have performed well and we’re now leading the teams’ standings by over 100 points. Of course, we want to win every qualifying session but sometimes you need to settle for a position further down to ensure we make it to the semi-finals.  We have a good team plan of how to work together and for the team championship – that is always the main goal.”

Loeb – who finished on the podium for the third event in a row – added: “My car was very good this weekend but the VW Polo Supercar and the driver performance is impressive.  Things are going well for us but we still need to do better.  We had a difficult day yesterday – I hit Andreas [Bakkerud] in Q2 and in Q1 I had some complications.  I had a tough fight in the semi-finals and maybe we could have been second if I had taken the Joker Lap later but this is a good result for the team and I hope I can make it a fourth podium when I go to my home event next month.”

MJP Racing Team Austria’s Kevin Eriksson had another solid weekend in his Ford Fiesta RX Supercar finishing fourth, one spot ahead of Heikkinen.  Team Peugeot-Hansen’s Timmy Hansen finished sixth after the Swede retired from the final on the penultimate lap due to a technical issue with his car. Reigning Champion Mattias Ekstrom ended the seventh overall after the Swede suffered from a clutch problem which dropped him to the back of his semi-final.  Meanwhile temperature problems denied Janis Baumanis a spot in the final and the Latvian STARD driver finished in eighth place. Elsewhere Hoonigan Racing Division’s Ken Block finished ninth with Kevin Hansen rounding out the top ten.

In the RX2 International Series presented by Cooper Tires, it was Frenchman Cyril Raymond who returned to the top of the podium after a lights-to-flag victory in today’s final. Belgium’s Guillaume De Ridder finished second, while American Tanner Whitten took the third podium spot.  Great Britain’s Dan Rooke was leading overnight but a collision caused the 20-year-old to retire from the final.  In the overall RX2 standings, Raymond now leads Rooke by 14 points.

Raymond concluded: “Two years ago it was my first RX2 experience in Canada where I finished second so I had some good memories here.  I want to thank my team for everything they have done – it was very wet yesterday but I like these conditions as it means we have to adapt and everyone is in the same position. Sixty points still up for grabs but I have a good gap, it will be very hard in Loheac as I will have a lot of pressure being my home race. For sure, it will be a big battle with Dan [Rooke].

Paul Bellamy, World RX Managing Director for IMG, concluded: “We’re now only three rounds away from our season-closer in Cape Town and the battle for this year’s title is still very much open.  Johan [Kristoffersson] may have extended his lead but with 120 points still available this season, it’s still possible for a number of drivers to walk away as the 2017 World RX Champion.  I would also like to say thank you to our GP3R organisers and volunteers for all their hard work in the poor weather conditions to put on this weekend’s motorsport festival. It was an honour to have Nicolas Hamilton onsite too, and was great to have him as a guest commentator on our World RX TV today – we hope he can return to rallycross soon, and next time as a competitor. Now we have a few weeks break before a busy September where we visit France, Latvia and Germany ahead of the final race in South Africa (10-12 November).”