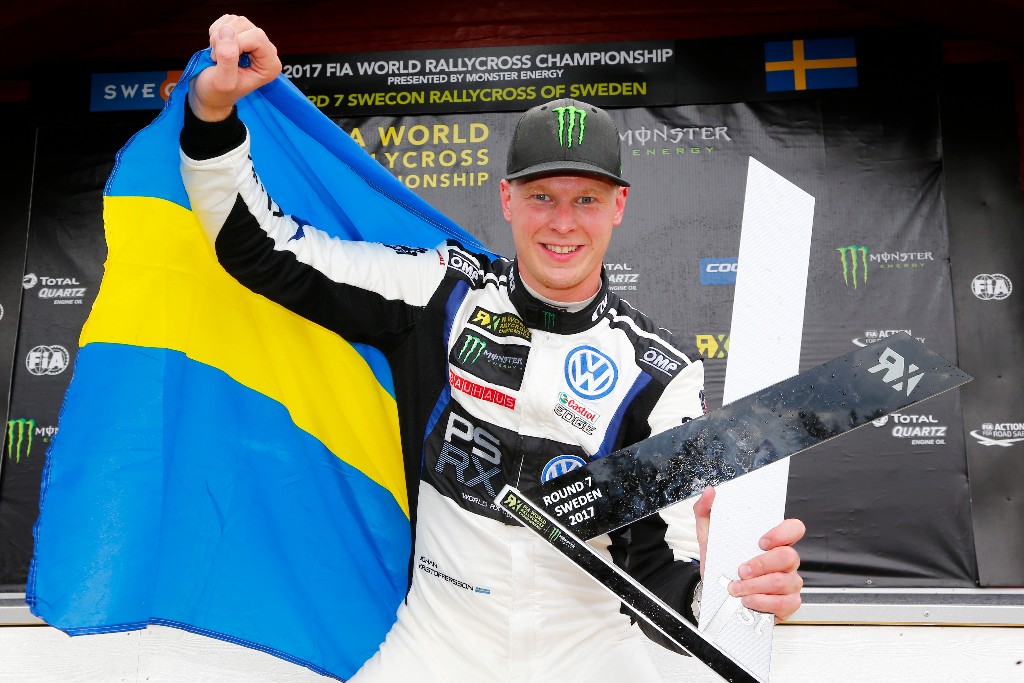 Sweden’s Johan Kristoffersson took a lights-to-flag victory on home soil at this weekend’s Swecon World RX of Sweden, round seven of the FIA World Rallycross Championship presented by Monster Energy. Kristoffersson’s win in the PSRX Volkswagen Sweden Polo extends the Swede’s lead on the overall leaderboard – he is now 31 points clear of team-mate Petter Solberg who has moved up to second. EKS driver Mattias Ekstrom was forced to miss Holjes RX due to DTM commitments and has consequently dropped to third in the points.

“This is a very good feeling,” beamed Kristoffersson who also won the previous round in Hell, Norway. “To be able to win two consecutive events is a great sensation and one that I won’t forget anytime soon. I’ve been working flat out together with the team trying to find the right set-up – for everything to come together for the final and to be able to hold the flag high for PSRX is just perfect. I have six podiums in a row in both World RX and in STCC which is something I don’t want to change anytime soon. We still need to play it safe as rallycross is a sport where anything can happen – we need to keep doing what we are doing and cannot afford to lose our focus.”

Runner-up Bakkerud added: “This track suits me well but we have to push hard which is what we have been doing all weekend. On a track like Holjes, you also need a bit of luck and I’ve had a good share of that thankfully! I’ve lived in Torsby in the past which is only an hour from Holjes so I have a lot of friends here along with my fan club – it’s always great to have so much support in the crowd.  I’m really happy with second place but you know, second place is the first loser. Hopefully I can find some more speed before Canada – Johan is having an incredibly good run at the moment so maybe a small break will unsettle him a bit, we will see.”

Loeb – who will start in the annual off-road Silk Way rally later this week – was pleased with his podium in the Peugeot 208 WRX Supercar. The Frenchman explained: “We had a good weekend here and I always enjoy this event.  I was pleased with our qualifying results, I love the track and had a very good feeling in the car.  We had some close battles and pushed hard for this podium. We still need to find some more pace – Johan was flying out at the front and we just couldn’t match the pace but I think we can take a lot of positives from the weekend. There won’t be any time for testing before Canada as I fly to Russia on Wednesday for the Silk Way Rally – it is something completely different and will be a great adventure before we return to Trois-Rivieres.”

Latvia’s Janis Baumanis – who drives for STARD – posted his best result of the year so far after finishing sixth overall in the Austrian-team’s Ford Fiesta.  His team-mate Timur Timerzyanov finished 11th in similar car. GRX driver Niclas Gronholm also had an impressive weekend, the Finn achieving his best result this season with a strong run to eighth place.

The third round of the FIA European Rallycross Championship presented by Monster Energy (Euro RX) once again saw plenty of action as a packed entry of Supercars battled it out in the highly-competitive category. It was Anton Marklund who eventually triumphed in the Volkswagen Polo, making it another Swede to win on home soil and in front of a record crowd of 45,100 people.  Peter Hedstrom took the runner-up spot while accomplished WTCC driver Rene Muennich rounded out the podium in his best ever rallycross finish.  Marklund continues to top the Euro RX leaderboard – he is now 19 points clear of Robin Larsson who retired from semi-final two.

In the fourth round of the RX2 International Series presented by Cooper Tires, Great Britain’s Dan Rooke took his first victory and ended series leader Cyril Raymond’s winning streak. “This is the moment I have been waiting for – my first international victory,” beamed 20-year-old Rooke, the reigning MSA British Rallycross Champion. Belgium’s Guillaume De-Ridder and Swedish teenager William Nilsson completed the RX2 podium in Holjes. In the overall standings, Raymond leads Rooke by six points.

In the FIA European Rallycross Championship for Super1600, where Sweden marked the third round, it was a Skoda Fabia podium lock-out. Latvia’s Artis Baumanis took the win and has snatched top spot on the leaderboard with a total of 75 points. Hungary’s Krisztian Szabo (the defending champion) and Estonia’s Janno Ligur were second and third respectively in similar cars.

Paul Bellamy, World RX Managing Director for IMG, concluded: “Once again Holjes has lived up to its reputation of the “Magic Weekend” with more than 45,000 fans visiting the Varmland forest to watch three days of rallycross action.  To have three home drivers make the World RX Supercar final and to have a Swedish winner in both World RX and Euro RX is the icing on the cake. The Holjes track always delivers fantastic race action and dry weather throughout the qualifying, semis and final, has only helped make this year’s Holjes RX even more special. It’s always fantastic to have a home winner [Johan Kristoffersson] and the atmosphere when he crossed the line in front of the home crowd was electric. The teams and drivers can now look forward to a short summer break as the World Championship prepares to cross the Atlantic for its first race out of the continent this year.”

PENALTIES
WORLD RX
“CSUCSU” #10, disqualified from Q1 for causing a collision and forcing another driver off the track.
Joni-Pekka Rajala #60, loss of ten championship points for use of a third turbocharger in the Competition.
Timo Scheider #44, five-second penalty in Q4 for causing an avoidable collision.