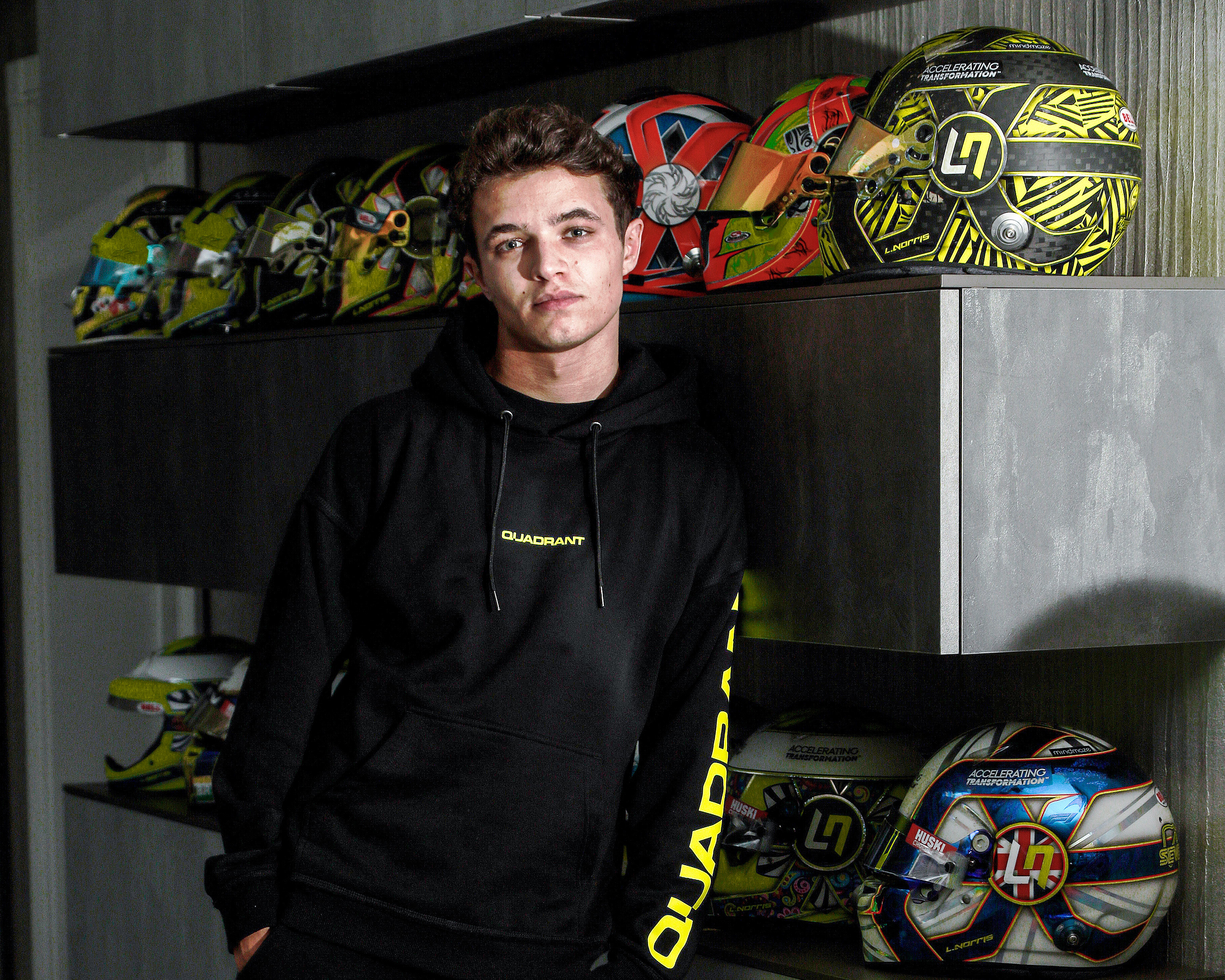 Formula 1 ace Lando Norris has today announced the launch of his very own premium lifestyle and gaming brand, Quadrant. The organisation aims to bridge the gap between his real-world motorsport activities and his now reputable streaming ventures.

Norris’s profile has risen exponentially since joining the Formula 1 paddock in 2019 and has continued to grow following a slew of strong results this season. In parallel, his online presence has expanded, thus creating the opportunity for an innovative online brand which combines many of his passions.

Quadrant will focus on blending four key aspects: gaming, apparel, racing and content, prioritising audience entertainment through authentic, casual content. The channel will also look to engage fans in new and exciting ways, with plans for Norris to use a Quadrant-designed helmet at the 2020 Bahrain Grand Prix and the aim to bring the squad to multiple Formula 1 race locations next year.

Owing to Norris’s passion for apparel, clothing will also be a big part of the Quadrant project with another arm of the brand designing and creating hoodies, t-shirts and hats among other items.

Joining the 20-year-old at Quadrant are a team of esteemed influencers across multiple different gaming platforms and genres, who collectively amass over 1.3 million YouTube subscribers.

Among them, is none other than F1 2020 YouTube star Aarav Amin (Aarava). Aarav is one of the world’s most popular Formula 1 game streamers and brings with him over 450,000 subscribers. Having previously worked with three of his four co-stars, he was a natural fit for the team.

Next in the line-up is Maria Bish (RiaBish). Despite being relatively new to streaming, Maria brings with her a huge Call of Duty Warzone following adding extra layers to Quadrant’s offering, expanding its reach beyond motorsport and virtual racing.

Niran Yesufu (FNG) completes the squad. Niran is a FIFA content creator known for sparking conversation, meaning he was quickly identified as the perfect influencer to regularly engage with Quadrant’s fanbase and to spearhead the channel’s efforts at Grand Prix.

The project was co-ordinated by Veloce Esports and ADD Management – Norris’s management company – with the goal of bringing five huge names from the world of streaming under one roof and, now that the team is assembled, the channel will produce videos and streams on a weekly basis for fans to enjoy.

“I’m so excited to introduce Quadrant to the world. I’ve been working hard on this behind the scenes for a while now with my management ADD and it’s a great feeling to finally have everything in place. I’m a gamer at heart but I’m also passionate about apparel and getting closer to my fans. I’ve always been keen to build a brand of my own, so this is a great way to blend all of that together whilst having fun with a few of my good friends.”

“We are really pleased to be able to launch this new company alongside Lando and continue to help him to achieve all his goals, both in Formula 1 and outside of the paddock. We know how important gaming and streaming is to him, so Quadrant is going to be a fantastic outlet for this and will give fans a much sought-after insight into his other activities.”

“Veloce Esports was a great match for Quadrant. We have worked with Lando before on the #NotTheGP series, and similarly with the other streamers on several other projects, so it seemed a perfect fit to bring everyone together. We’ve got some brilliant content coming your way and we can’t wait to see what the future holds for this exciting brand.”